Edward Ka-Spel’s brilliance with The Legendary Pink Dots is to introduce us to isolated characters and then immerse us in their world-view through expansive and mysterious soundscapes. He begins with the most restricted, infinitesimal point of consciousness and then slowly expands it outward towards a state of ‘cosmic consciousness’ (to use the phrase of 1960s psychonauts). Musically, he often follows this template of expansion, with simple melody lines repeating and layering in increased complexity of texture. Much of the LPD’s music is an undertaking to help the listener (and perhaps composer) escape his/her own head. Lyrical phrases, musical motifs, album titles and themes recur across decades, but tonal shifts between albums are slow and subtle. Hopefully, The Legendary Dots Project, like the Residents and Sparks projects before, will provide the keen reader and listener with a giddy entry-point into the Legendary Pink Dots’ musical world. Fulfil the prophecy!

Adam: We’re completists, Tom and I, and three out of five of the Dots’ 1990s compilations contain tracks not previously reviewed here for the project. For this week’s dive into the plasma pool, I will be providing the holistic overviews of the albums’ auditory landscapes, while Tom will be serving up the deep cuts not yet previously dissected. Ancient Daze and Under Triple Moons, both from 1997, have been fully excavated, so we begin a year earlier with… 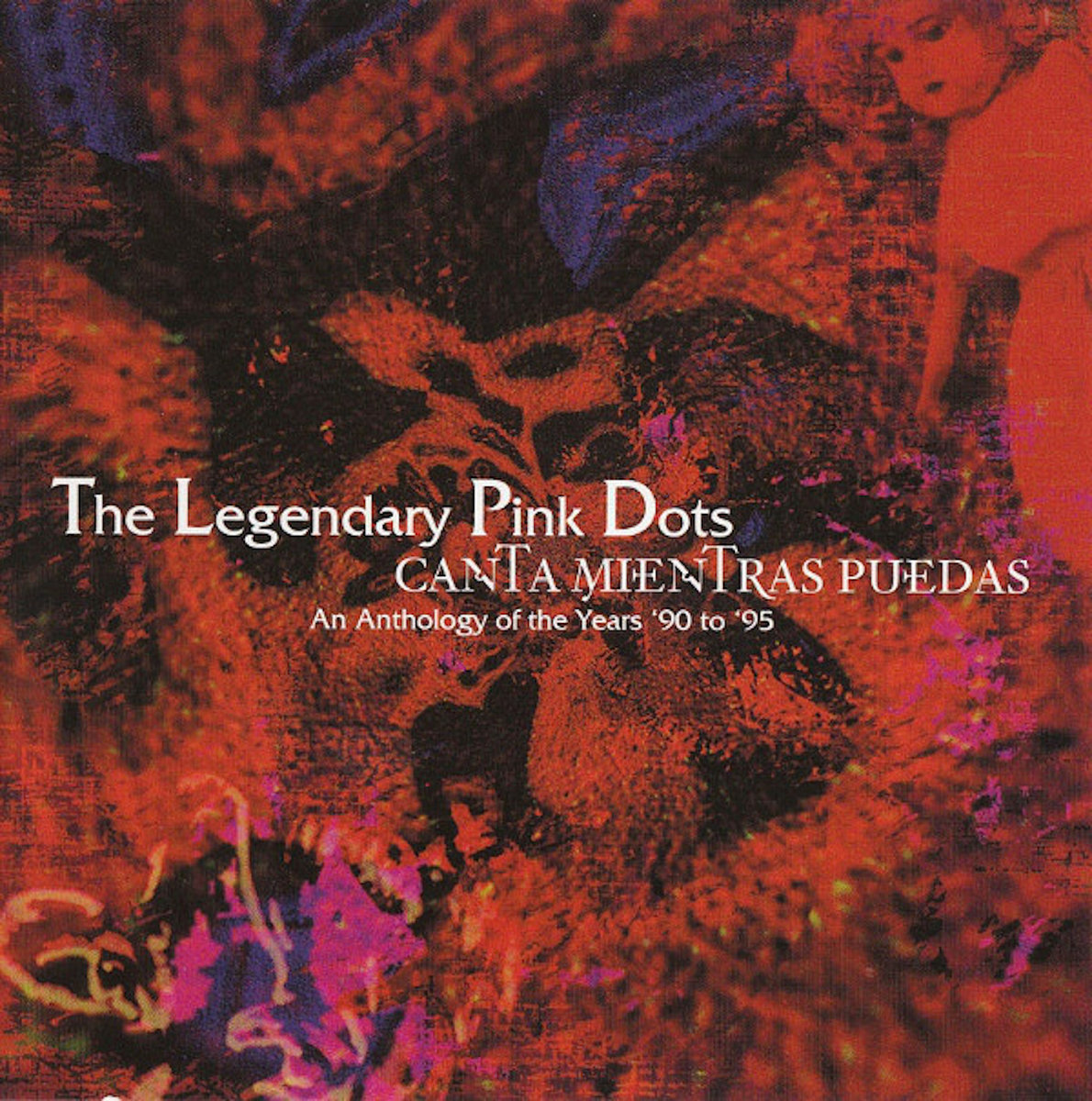 Adam: This collection of the Dots’ classic 1990-to-1995 period wasn’t specifically for Spanish listeners, despite its title being the Spanish translation of the band’s semi-official motto of ‘Sing While You May’, but was intended for new initiates. It’s a dreamy, trippy collection of some of the absinthe eyed, spiritually altered grooves from Crushed Velvet Apocalypse (1990), The Maria Dimension (1991), Shadow Weaver (1992), Malachai (1992), 9 Lives to Wonder (1993), From Here You’ll Watch the World Go By (1994) and Chemical Playschool 8 & 9 (1995). The tracks from Crushed Velvet and Maria Dimension are so familiar to me at this point that they churn and babble along pleasantly like old drunks at a bar. However, I’ve listened to Shadow Weaver much less, so the lovely yearning chord sequence of ‘Prague Spring’ pulled me up short. Patrick Wright’s violin trills with honeyed sweetness and the combination of piano and guitar feedback has the urgency of a great Brian Eno or Philip Glass score.

‘A Triple Moon Salute’, which follows, is an unexpected addition, since – murky and spectral as it is – it has the texture of a much earlier Dots track. It works as an eerie bridge here, joining ‘Prague Spring’ to the strange and singular ‘Joey the Canary’. ‘Siren’ and ‘The Angel Trail’ are hypnotic incantations best suited to a campfire drumming circle or a really decent surround sound speaker setup (neither of which I currently have at my disposal). Finally, the version of ‘A Velvet Resurrection’ here seems shorter than its 6 minutes, rattling along in a flash. Perhaps it is more effective when buffetted by longer ambient soundscapes on either side. However, ‘Friend’ ends proceedings on a triumphant note, finishing with a fast strummed piece of flamenco-like guitar, almost like the gypsy punk of Gogol Bordello!

All in all, this is an accessible introduction to the band’s most consistently treasured and acclaimed run of music, which will be sure to draw curious listeners into the fold.

Tom: ‘A Velvet Resurrection (different version)’ from an anthology of the years ‘90 to ‘95. We’re talking deep nineties! This is one of the finest of all Dots lyrics from Ka-Spel, searching idealism straining to assert itself against all possible odds, against all the bleak realism that evidence suggests. I can’t at this distance male out what the differences are from the album version. Intriguing still to ponder quite what the sample is: Bloody damn what comes back from Dalston?

‘Friend (different version)’ is still a strong song, nifty, wary, uneasy. However, I didn’t recall the giddy Mediterranean knees up instrumental bit at the end of this version which gives it an entirely odder, perhaps even preferable conclusion to the From Here You’ll Watch the World Go By version. 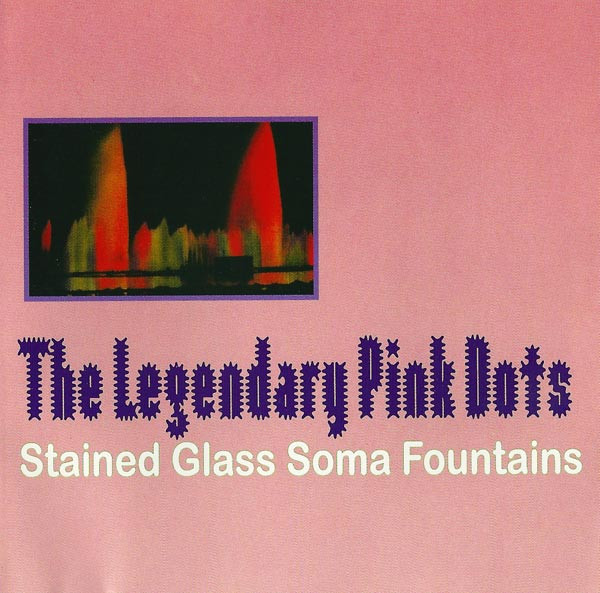 Adam: Stained Glass Soma Fountains is an enigmatic and misshapen two-disc collection of early ditties and experiments by the Dots. While composite tracks like ‘Judith a Hum-Praum Naizh-A Pale Green Sequel’ can feel murky and aimless, they benefit from being left on in the background half-ignored, so as to pounce upon you unawares in the moments where they suddenly disclose a talon, a snarl, a fang, a dilated pupil. Some of the very early tracks are gossamer-thin demos, delicate tinny creations of a bunch of very musicians who had yet to settle upon the LPD moniker, but were calling themselves ‘One Day’. ‘April’s Song’, dated from August 1980, provides a template of what could have been… a woozier, keyboard based, woman-led musical trio. Some evocative glimpses of what this might have sounded like can be heard on April White’s Bandcamp page, particularly on her 2013 album This Way Out. Otherwise, some of my very favourite early Dots tracks are represented here, including ‘Frosty’, ‘Plague 2’ and ‘Defeated’. The collection finishes with the two-part ‘Premonition 18’, which is as mordant and eerie as anything on Crushed Velvet Apocalypse, but largely hangs around lugubriously like the ghost of a Roanoke colony puritan haunting an abandoned shopping mall disapprovingly and testily. 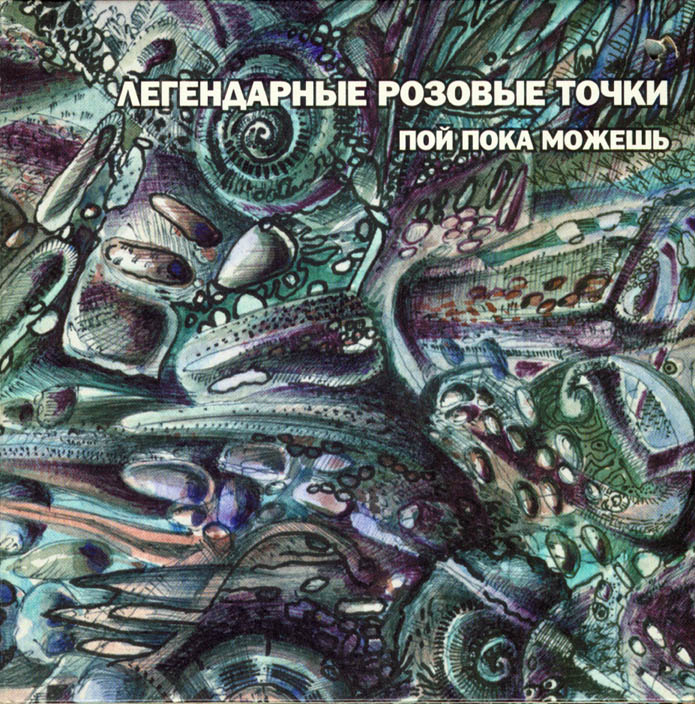 Tom: This was released 8 June 1999, I was leaving my comprehensive school soon after my GCSEs. Geddin! The album title is ‘Sing While You May’ in Russian. The current Russian regime’s atrocities and aggressive invasion of Ukraine are to be totally condemned. This does not stop us discussing a Russian titled release. The green hued album cover seems to display tendrils, or rhizomes, or wheels within wheels or ammonite fossils amid pebbles and foliage. No, this isn’t human-featuring cover art!

Adam: This is a more magisterial, less languid collection of tracks than those on Canta Mientras Puedas, though not alienating or forbidding. ‘Casting the Runes’ and ‘Zero Zero’ are both worthy of laudation and sure to bring out lighters (or cellphones) waving in the dark if given as encores at a gig. I had forgotten, however, quite how brilliant ‘Damien’ is, especially the soaring space-rock guitar at its climax. It’s a gloriously composed piece of music, perhaps a bit buried towards the end of the somewhat overwhelming – consistently brilliant as it is – From Here You’ll Watch the World Go By.

‘Pennies for Heaven’, ‘Third Secret’ and ‘New Tomorrow’ are all qualified bangers, though ‘The Golden Age’ is a bit of a curio, likely included because it flows uninterrupted off the back off the the quietly harrowing ‘Lisa’s Separation’. Personally I would have removed it and had ‘Separation’ go directly into the sad and wiftful ‘The Lovers: Part 2’ (though Wright’s violin certainly brings the majesty here as well!)

‘Supper at J’s’ churns and bubbles along rather murkily until approximately 7 minutes in at which point it becomes a minor jungle rave in a distant robot landscape! ‘Interflora Overdrive’ is split into two parts, both of which are weird and funky and a little curdled! They’re somewhat strung out freakouts, but cosmic enough for this Wednesday early afternoon.

Overall, a sterling collection, but I’d still rather listen to the albums proper. However, Russian listeners circa. 1999 were not being short changed. 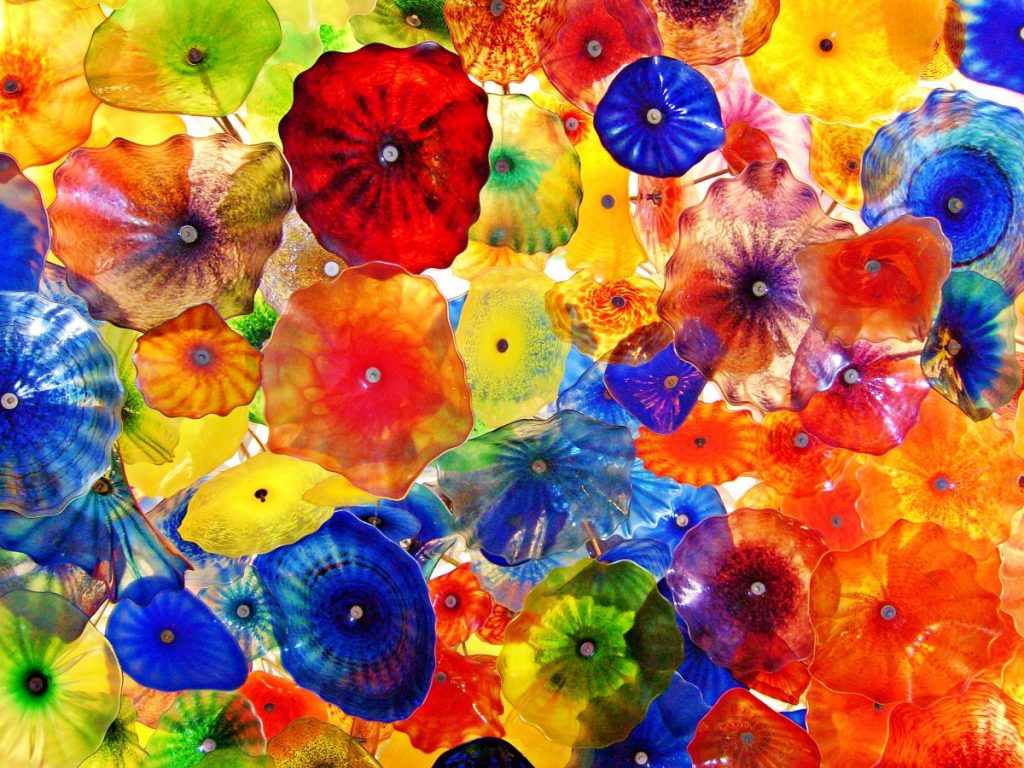