Edward Ka-Spel’s brilliance with The Legendary Pink Dots is to introduce us to isolated characters and then immerse us in their world-view through expansive and mysterious soundscapes. He begins with the most restricted, infinitesimal point of consciousness and then slowly expands it outward towards a state of ‘cosmic consciousness’ (to use the phrase of 1960s psychonauts). Musically, he often follows this template of expansion, with simple melody lines repeating and layering in increased complexity of texture. Much of the LPD’s music is an undertaking to help the listener (and perhaps composer) escape his/her own head. Lyrical phrases, musical motifs, album titles and themes recur across decades, but tonal shifts between albums are slow and subtle. Hopefully, The Legendary Dots Project, like the Residents and Sparks projects before, will provide the keen reader and listener with a giddy entry-point into the Legendary Pink Dots’ musical world. Fulfil the prophecy! 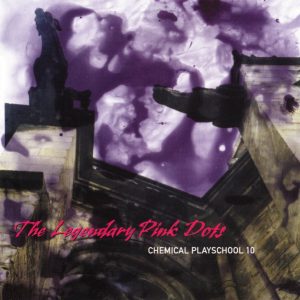 Tom: And, so, onto the latest Chemical Playschool release, unleashed in 1997…

This is, for me, one of the less essential Chemical Playschool releases, too often seeming to lack punch or intensity. There are Midi-Goth and drifting space rock textures that appeal at times, but all feels sketchier and less compelling than we are given to expecting from the Dots.

Adam: This review will be a little quick and dirty. I suspect I like Chemical Playschool 10 a fair bit more than Tom, but it’s still a slight album which does not require the deepest of excavations. It begins with the MIDItastic ‘A Scarlet Wish’, which sounds like an elegy for a corrupted save file in Planescape: Torment, that definitive RPG from 1999, full of turn-of-the-millennium morbidity. In the face of such postmodern end of history nihilism Ka-Spel urges the listener to “Believe again… there’s so much to live for”, though it is hard to believe his heart is fully in it. The track has the vast but tinny pipe organ sound of Hardy Fox’s curious 2001 release High Horses. The following track, ‘Inside’, is a fuzzy neurotic rocker with Ka-Spel sounding for the first time like an elder statesman, some kind of gothic godfather. The production is spacey but claustrophobic.

Unlike Tom, I really like the morbid whimsy of ‘Colour Wheel’, a gothic lullaby that anticipates the 2007 I Can Spin a Rainbow collaboration with Amanda Palmer by some two decades. Musically, the track is notably similar to the sound of The Rolling Stones’ maligned psychedelic album Their Satanic Majesties Request (1967), perversely the only Stones album I actually like. Lyrically, the track is a woozy take on Edgar Allan Poe’s psychological colourscape in The Masque of the Red Death (1842). Did you know that I made a game based upon all of Poe’s short stories (sans a few of the detective ones)? Well now you do!

‘The Disaster Area’ sounds like a field recording from a nightclub filled with flie sand sweaty guitars. I picture Jimi Hendrix shredding forever in the centre of a cheap CGI whirlwind. In truth, this is an inessential stadium rocker, reminiscent of a mellow Pink Floyd freakout. I do wonder if Ka-Spel and the gang were trying to roleplay as Douglas Adams’ fictive band Disaster Area, a band of whom it was said were best enjoyed from within a large concrete bunker three dozen or so miles away from the stage. At first, ‘Nouveaux Modes Exotiques’ is more promising, conjuring the imaginary sound of synaptic nodes lit up like sparklers against the night sky. Such a gratifying timbre deserves something a little more complex than the track’s simple beat and driving riff. It’s cool, but it never really develops so it becomes a bit of a plodder, not rescued by the back-tracked vocals. ‘Glasshouse’ is more goth, better suiting the general tone of the album. It emanates like  a shivery funeral organ from a church in winter. There are heavy distortion on the vocals. Lyrically the track seems to be about a toxic, emotionally mutually abusive relatiosnhip that has been dragging on for ten years. 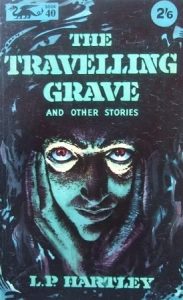 However, the last lines, “And I’m burning/ Just burning up on the inside/ It’s so very very cold here/ So very very cold here/ And I doubt if things will ever change” recalls the image of personal Hell that closes L.P. Hartley’s haunting short story ‘The Thought’ from his 1948 collection The Travelling Grave and Other Stories.

We stay with the glass motif for the next track, ‘The Man with the Cut-glass Heart’, a great gothic dirge with a really irritating dub-style cut-up ending! I was self-indulgently listening to this (very quietly) while working behind the library helpdesk and my co-worker said it reminder her of Marc Almond, specifically ‘One Night in Istanbul’, which which she might have meant ‘She Took My Soul in Istanbul‘ or ‘One Night of Sin‘, probably the former. By contrast, ‘Little Romeo/ Kleine Juliet’ (which are put together on Bandcamp) starts with a noisy flurry of feedback that seems to begin in medias res. There is a nice drum fill halfway through seems to usher the jam to a premature end, only to be replaced by a desolate musical aftermath – a churning and chiming soundscape with melodic snatches of guitar and mildly dissonance electronic flourishes. It features a rather lovely looping sound at the end like the memory of church bells.

As mentioned in the review for Hallway of the Gods, I slightly prefer the earlier version of ‘The Saucers are Coming’ included here. It starts less sedate and more wired than the later version, with a sinister snaking bassline introducing this tale of alien invasion. It misses out the first person everyday preamble and cuts straight to the chase.The overall impression is one of weird squelchiness. Even on tinny laptop speakers it still has the power to takes me on a thrilling cosmic journey. The track never returns to Earth, instead leaving off with the listener in the spaceship, bound for God knows where. ‘Premonition 19’, which follows, is not one of the longest ‘Premonition’ tracks thus far at only 8 minutes, 18 seconds. No. 19 features the churning and burbling typical of the Premonition tracks, but with more computerized blips and bloops. It sounds like a field recording from the surface of the Clangers’ home planet mixed in with what sounds to me like some fingers sliding about the strings of an electric guitar!!

Finally, in terms of the album proper, is ‘Wonderdome’, a track of insidious seduction followed by a long, long pause. After this pause we are rewarded with “Don’t throw your crisp packet at me you foul alien bastard!!!” Very droll!