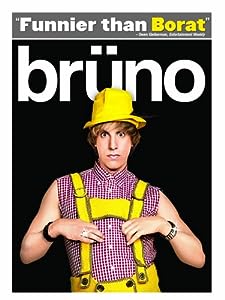 Before I start the real review for this movie, I want to mention the one thing I did not like about it, just to get it out of the way before it feels like an interruption of all my gushing. I fucking hated the song in the finale. It felt forced, and was not in the least bit funny. An extremely unsatisfying ending to an otherwise brilliant and exciting film.

The basic plot is that Sacha Baron Cohen’s character Brüno loses favor in his native Austria after an incident at Milan Fashion Week, so he moves to the US, along with his doting assistant’s assistant, to find fame. About half of it is more of an actual, narrative movie than just pranks and making people uncomfortable, but even the narrative is kind of driven by the suggestions of the people interviewed, which I thought was really interesting and great. For instance, he goes to a psychic to talk to Milli from Milli Vanilli, and the psychic tells him that Milli thinks he should get involved in charity, so he goes to see some charity publicists, which leads into him adopting the African baby. Throughout the film, Cohen again pulls some truly fucking insane and dangerous stunts, more so I think than in Borat

, and it is fucking terrifying to watch, which is naturally very impressive. So much of comedy is about fearlessness, and I love it when actors are willing to make true sacrifices just to keep people laughing.

A lot is being made of whether this movie is helping or hurting gay rights, and I don’t think it’s either one, nor is it intended to be. I think it’s safe to assume that Cohen himself clearly supports gay rights, but I don’t think this film has a political agenda. It’s true that he plays on gay stereotypes, arguably reinforcing them to less savvy audiences. And it is also true that he is exposing rampant homophobia across the country, and maybe I am biased, but it seemed very clear who the real villains are. We are meant to laugh at the homophobes. These are malicious hate-mongers who do everything they can to terrorize the LGBT community, and we rightfully get off on seeing them suffer a bit. But again, we are also laughing at the character of Brüno, as he proves himself to be an unfit gay parent. This balance of ideals is evidence of the film’s, and Cohen’s, lone agenda: to make people laugh. And while he’s at it, stir up some controversy by offending people on both sides of the fence, which is nothing more than a brilliant marketing strategy. I, personally, think having messages in movies is a complete waste of time that often distracts and takes away from what is potentially a better product. Brüno, however, is subverting the entire concept of having a message in a movie, and by my standards, this is sheer perfection.

In addition to all that, there are other scenes that are sort of challenging in terms of how one should feel. In one sequence in particular, Brüno is asking parents what they are willing to put their toddlers through in order to be hired as models for his photographs. And one of the mothers, as she agrees to more and more horrific things, seems to be on the verge of tears, like she is clearly broke, and desperate to do whatever it takes to support herself and her family. So on one hand, I’m inclined to feel bad for her, because she clearly realizes that she’s a terrible mother, and looks like she’s about to kill herself because of it, and on top of that, this is now all being seen by millions of people. But on the other hand, how much sympathy can I really have for someone who just agreed to give her baby liposuction? In another scene, Brüno tries to make a sex tape with Ron Paul. In a rather elaborate setup, he humiliates an elderly former Presidential candidate, and the whole sequence exists solely as build-up for an incredibly cheap, though admittedly effective, punchline. Was it really worth it? As far as I’m concerned, sure. It was worth it not for the cheap laugh, but because it’s so absurd that he would go to such lengths just to achieve a cheap laugh, and as a result, this takes a cheap laugh to another level of actually being challenging.

The word challenging is usually thrown around for movies I don’t like, because I generally prefer movies to be simplistic, but here it works. And it works because I’m left feeling mentally uncomfortable, which I would have to say is my favorite state of being while watching movies. I like to be uncomfortable, I like to laugh, and I like it when I’m not assaulted by heavy-handed messages I’m most likely already on board with, and this movie satisfies immensely on every fucking level. It’s exciting and amazing. 10.0 out of 10.0