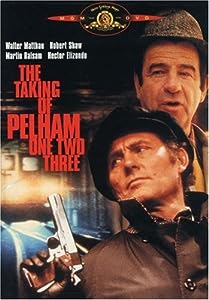 Cover of Taking of Pelham One Two Three

If there’s a good thing about remakes in general, even ones that aren’t very good, it’s that they can rekindle interest in the original. I’ve basically heard nothing but bad things about Tony Scott‘s The Taking of Pelham 123

, but Joseph Sargent‘s The Taking of Pelham One Two Three is a nigh-masterpiece.

Walter Matthau and Jerry Stiller are great as the two Transit Authority Lieutenants, and not to mention Robert Shaw and Martin Balsam as Mr. Blue and Green respectively. (It’s not hard to see why Tarantino copped the use of the color-names for Reservoir Dogs

.) The entire film is so well made — lots of bits of (actually funny!) comedy and high tension that ebbs and flows naturally.

The interaction between Mr. Blue and Mr. Green is great — Mr. Blue’s calm and calculating, while Mr. Green — a former subway driver — almost seems as if he’s in a bit over his head and honestly doesn’t want to see anyone hurt; a view unshared by any of the other Misters. (The look on Green’s face at any of the deaths is one of mild shock and distress; though, admittedly he’s not innocent in any means — without him, the scheme wouldn’t have worked, and it’s not like he tried to stop any of the murders.) Blue seems somewhat annoyed at Green’s general friendliness, though — he chastises him for chatting with the motorman running the Pelham train, and seems mildly exasperated when Green worries about what’d happen if the money doesn’t come through — the answer of course being “We’ll start killing passengers just like we said.”

Matthau is great in this too — his Lt. Garber is obviously upset at the entire situation, not least of all including the death of his friend Fat Caz, but like the best cops, is able to sublimate that distress and keep his cool to do his job… part of which is the best thing about the movie. The central question the characters keep coming to is “Once you’ve hijacked a subway car – by definition, a train car surrounded on all sides in a tunnel – how do you escape?” And the audience is kept in the dark as much as the characters. And the solution is very clever — and it’s amazing that, particularly in a hostage movie, the plan WORKS. It’s very rare for a hostage-ransom scheme in a movie actually works out as well as this one does. Even in the best ones, and Dog Day Afternoon

comes to mind, it rarely seems that the criminals have an end-game in mind. So, while watching the film, in the back of my mind, I’m thinking “It’s a pity that they’ll all end up getting arrested almost immediately after they release the hostages” — so it was a pleasant surprise when they DIDN’T.

If you really want to see how a hostage movie should be done, check this one out — and, if anything, it’s worth it just for the ending, which is so perfect and well done, a great capper for a great film.