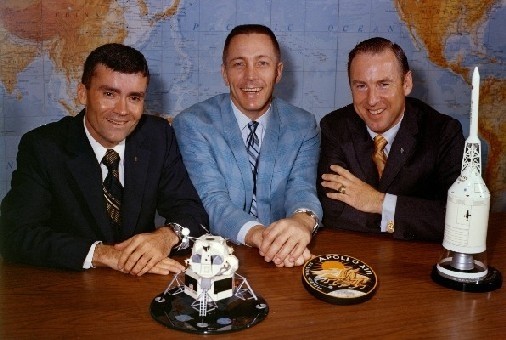 Given that the 40th anniversary of Apollo 13 was a week ago, I recently re-watched the 1995 movie Apollo 13

, starring Tom Hanks as the happy-go-lucky, all American, apple-pie mission commander Jim Lovell, Bill Paxton as the brash LEM pilot who won’t shut up (Fred Haise), and Kevin Bacon as the man-whorish, arrogant as all fuck, party freak backup command module pilot (Jack Swigert). I first saw this movie as a teenage nerd and really dug it at the time. My favorite parts were when Marilyn Lovell freaks out at the press corps parked out on her lawn (Marilyn Lovell could STILL kick my ass in an arm-wrestling match), and when Haise and Swigert nearly get into outer-space fisticuffs over whose fault it was that the command module exploded (Haise blames Swigert in the film). It would have been an even better scene if Haise had said “I heard your mama blew up…in my bed!” and had gotten his ass kicked in space by a clearly pissed-off Swigert. But enough of that. My curiousity, upon reviewing this film last week, was to see how much of the film was historically accurate. As it turns out, plenty of the scenes in Apollo 13 were embellished quite a bit to provide “dramatic intensity,” mostly at the expense of the real-life Jack Swigert, who most conveniently for the scriptwriters is dead as hell and obviously can’t speak for himself.

The movie tends to depict Jack Swigert as a complete, balls-to-the-wall man-slut who has little to no piloting experience. At the beginning of the film we see him trying to woo some unsuspecting chick with a graphic description of in-space rendezvous (you can just guess how he describes it). Before ol’ Jack gets the call that he is replacing Ken Mattingly (who had been exposed to measles, and was bumped from the flight), he is seen getting down to business with some other, different 1970s chick in a hotel shower while listening to the song “Born to be Wild.” Later in the movie, Haise makes a retort to Lovell about Jack giving him gonorrhea by urinating in his relief tube. While it is true that Swigert was a bachelor, most of his real-life friends have protested that his dating habits were not promiscuous; like most single men he happened to date some women, which is hardly fodder for thinking he was some groupie-guzzling figure at NASA.

In the film, Lovell and Haise seem to be utterly mortified that Swigert replaces Mattingly, because of his lack of experience in simulators. This in reality was pretty far from the truth. Swigert had been a pilot since the age of 14, and had basically written the contingency procedures for the Apollo program. He also wasn’t some flighty dumbass; he had two postgraduate degrees. He had as much simulator time as the members of the mission’s prime crew did. He wasn’t some dude who was picked up off the street to pilot Apollo 13. The movie’s plot almost makes it seem that some random janitor was picked to be the command module pilot. Kevin Bacon’s portrayal of Swigert is perplexing…he seems alternately hung up on himself and quite insecure in his piloting skills.

But what I disliked the most is how the movie kind of blames Swigert for the explosion of the Apollo 13 service module. Swigert in reality was the ship’s driver who helped bring the command module home after a freak electrical transient when all three men should’ve been toast. The only thing accurate about the film is that Kevin Bacon sort of looks like Jack Swigert. So I conclude that Kevin Bacon helped blow up Apollo 13, and not Jack Swigert himself. I believe it is kind of shitty to make assumptions – even if they’re just dramatic assumptions – about a dead person (Swigert died in 1982).

In line with my style of thinking, I have also concluded that Vince from ShamWow killed both Billy Mays and Michael Jackson. Vince’s recent “hired help” scandal was so momentous that he felt a need to divert his attentions to destroying Billy Mays; in turn he also wielded the syringe of Demerol/Prozac/crack rock etc. that ended Michael Jackson’s life to divert attention away from Billy Mays’ future death. I hope to write the screenplay for the film adaptation of my theory, but I will probably have to wait until Vince dies first…