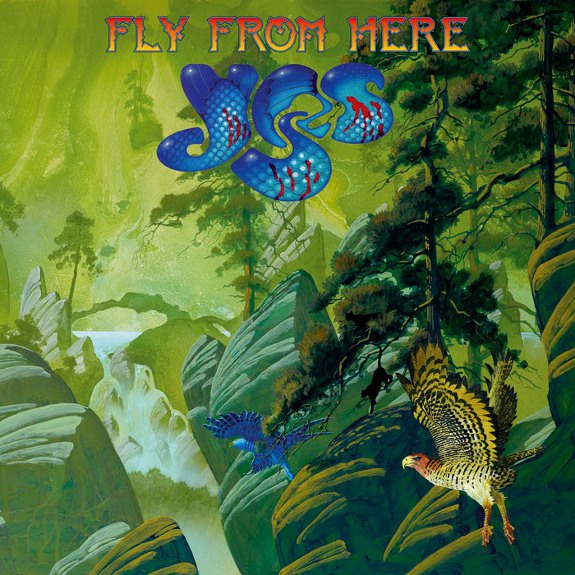 It may be no coincidence that Yes’s prodigal guitarist Steve Howe bears an uncanny resemblance to The Crypt Keeper. After all, Yes is one of those bands that refuses to die. Every time it stops, someone manages to reanimate the corpse. Over the years, Yes has been a Frankenstein’s Monster of a band. Slap a new keyboardist here, a new guitar player there. swap drummers as needed, add a fork of lightning and suddenly you have a band ready to record and tour. The only member who’s never left is bassist Chris Squire. Until now, it’s been a decade since Yes last released a studio album, the orchestral-dosed snoozer Magnification. In that decade, long time vocalist, Jon Anderson dropped out with health issues, but that didn’t stop the lumbering beast any more than it did in 1980 when Howe and Squire recruited upstart new wave band The Buggles to fill in the holes in the lineup. The resulting album, Drama, was not the best received record Yes ever did, but it kept them going to the return of Jon Anderson and their commercial breakthrough with the Trevor Horn produced 90125. 1

With Jon Anderson out again, Yes looks like it’s trying to repeat their 1980 experiment. Both Trevor Horn and Geoff Downes are back with the band. Downes handles keyboard duties, though Horn isn’t behind the microphone this time. Instead, he’s in the booth while Benoît David, former Yes tribute band member takes over vocal duties. It’s a smart move. David joined the group for their first post-Anderson tour, and unlike Trevor Horn, he can actually hit the high notes. Multiple times while listening to the album, I felt like I wasn’t listening to an ersatz vocalist at all. The voices of David and Anderson are quite similar, though Anderson does have a slightly higher pitch. That similarity, of course, is exactly the point, and avoids the problems that plagued the Drama tour when performing old material. Allegedly, Trevor Horn still has nightmares…

While Fly from Here isn’t exactly Drama Part II, it does have more in common with that project than the band lineup. The title piece, a six-part, 24 minute epic, is based on a track written by Horn and Downes for Drama, and was re-recorded for–but dropped from–The Buggles second album, Adventures in Modern Recording. “Life on a Film Set” is based an unreleased Buggles track as well. Of these, “Fly from Here” is the better of the two. 2 While it breaks exactly zero new ground for Yes–unlike the epic opener “Machine Messiah” from Drama 3, its Yes-by-numbers approach serves to ground the track in the rich, 40-plus year tradition of Yes. Specifically, it plays to the popular image of Yes as a band that routinely does 20+ minute, side-long rock epics. Someone who is mostly familiar with the most classic of Yes’s output would feel well at home, author included. Despite its length, it does work well when compressed into a pop song length music video.

Unfortunately, most of the songs that aren’t the “Fly from Here” suite–all five of them–are rather forgettable. One of the two exceptions is the appropriately titled “Solitaire”, a Steve Howe acoustic guitar workout that’ll please those who love acoustic guitar showmanship. It’s a fine piece of classically influenced guitar playing that treads just up to the line of being a piece of masturbatory showmanship, but thankfully restrains itself. “Into the Storm”, the album’s closer tries to be a modern day “Heart of the Sunrise”, but comes up a bit short.

As for the album’s sound, Trevor Horn’s production is far more subdued here than it is on 90125, not that it takes much to be more subdued than 90125. Fly from Here genuinely feels like a recording from Yes’s 1970s prime with modern equipment. If there’s a downside to the production job it’s that it can sometimes come off as a bit sterile. “Into the Storm”, for example, feels like it was recorded in an operating room, not a recording studio. The musicianship on the album is as solid as one would expect from a rock band with a combined 80-some-odd years of experience together. If there’s weak link, it’s that Geoff Downes isn’t exactly Rick Wakeman, and his keyboard playing doesn’t quite reach the virtuoso levels that one expects from a Yes album. Then again, some might be glad to not have the same mind that provided us with The Six Wives of Henry VIII: On Ice 4 deliver his particular brand of keyboard pyrotechnics.

Out of the gate, some people are going to hate this album, simply because it’s Yes in name–and sound–only. To many, Jon Anderson is Yes. Those people are foolish. Besides, having Jon Anderson isn’t a guarantee of a good album. 5 Fly from Here is about as good as you can probably expect given the circumstances: a new vocalist, a decade spent not recording, and an aging group of core musicians. Choosing to base most of the album on unused, thirty year old material proved to be wise. The final judgment of Fly from Here’s worth has to be based on one simple thing: does it sound like your preferred variation of Yes. If you’re into the band’s 70s output, then you’ll probably like it. Anyone into 90125/Big Generator era Yes probably isn’t even going to give this a chance. If you prefer their 90s output, then what the hell is wrong with you? Fly from Here isn’t a 21st century Fragile, but it is a decent Yes album. Keep your expectations reasonable, and you’ll be in for a good flight.