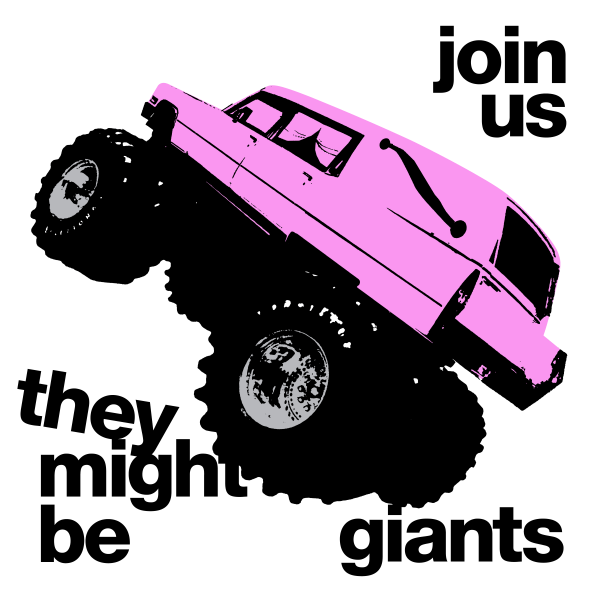 I want to like this album more. This album makes me want to like it more. Join Us is an excitable album. It jumps up, bounces around the room, and says, “Hey! Look what I can do! I’m everything you could possibly want from a They Might Be Giants album!” It’s unmistakably They Might Be Giants, though with a bit more of an electronic edge, and a heavier sound. Join Us continues in the harder direction pioneered by The Else with heavy percussion and techno-influenced beats, all skewed through the trademark TMBG sensibility. The best tracks could just have easily fit on The Else as they could on Join Us, and maybe that’s why they stand out so much. The Else is one of my favorite TMBG albums, and if Join Us is anything, it’s the direct heir to the previous album and sound. Why then, does listening to it feel like such a slog?

It’s worth noting that Join Us is TMBG’s second longest album, with 18 songs over 47 minutes. Only John Henry is longer, clocking in at nearly an hour. [1] The average song on it clocks in at a little over 2:30. The longest song, “Celebration” is almost four minutes. The shortest–and second best on the album–is “Judy is Your Viet Nam” at 1:26. What am I saying with the math here? I’m saying that most of the songs go by in a blur, while the album itself tends to crawl. When I decide to listen to it, I feel like I am making a deliberate investment of time and effort to make it through the next 47 minutes.

Good lord, it’s not like the Johns are out of ideas–quite the opposite. After four years without an album for adults, Join Us comes off like [T]hey were desperate to cram this new album with everything they can think from their earlier albums and then some. Want lyrics with complex ideas, puns, and a bit of word-salad weirdness? Check. Want unique arrangements, and flirtations with styles outside of the typical alt-rock sound? Check. Want accordion? Check. Horn sections? Check. Weird vocal effects? Check, and double-check. [2] A lot of this feels like it’s been done before. It’s not that I think the Johns were standing in the studio with a checklist, making sure to hit all the trademark TMBG notes, but I wouldn’t be surprised if they were. If this all added up to making something that was as memorable and catchy as their previous albums, a checklist wouldn’t feel egregious. The inverse would also be true: if they used a checklist and produced this, it would be shameful.

No, no, that last statement is far too harsh. When Join Us is good, it’s really good. Songs like the lead-off single “Can’t Keep Johnny Down”, as well as “Old Pine Box”, “Judy is Your Viet Nam”, “Canajoharie”, and “When Will You Die” are as good as the best of the band’s post-John Henry output. Meanwhile, “Never Knew Love” and “Cloisonné” are at least decent songs on par with most of The Else. They’re not just good They Might Be Giants songs, they’re good songs. I could listen to them over and over again. In contrast, big chunks of the album are… forgettable. I could listen to this record two-hundred times over, and I doubt I’ll remember much, if anything, of “Let Your Hair Hang Down”, “Protagonist”, “The Lady and the Tiger” or “Spoiler Alert”. As for “2082” and “Three Might Be Duende”, I’m still trying to digest how I feel about them.

I wish I could forget a few songs, though. “Celebration” is just a dull, disco pastiche that goes nowhere. Meanwhile, “Dog Walker” is probably the worst track TMBG have ever put on an album ever. The music is uninspired, the lyrics are annoying, and the vocal effect makes me want to punch John Flansburgh for using it. Finally, album closer “You Don’t Like Me” feels like they didn’t want to bother writing actual song lyrics and decided to just list slightly divisive pop-culture terms: “You like shadow puppets, Woody Harrelson, reading in the bath, Nirvana, and baseball caps”. Hell, even the vocal delivery comes off as bored. If they’d slapped this song in the middle of the record, it would be okay, but as a closer it just feels like there’s supposed to be something else following it. I’m not expecting every album to end with a “The End of the Tour”, or “The Mesopotamians”–or even “Kiss Me, Son of God”–but I need something with more depth to close a record.

Despite all its flaws, its calculated, deliberate quirkiness, its sub-par songs, there’s something charming about Join Us. It’s the woobie of the TMBG discography. It suffers, but you can’t help but love it–or maybe just tolerate it–despite, or even because of its quirks. [3] In the end, alas, I’d give almost anything to have it be a more cohesive, fun, and joyful listening experience. Then again, if I really wanted cohesiveness, I wouldn’t be listening to They Might Be Giants. Part of the fun of their albums is the way they go all over the map, under the map, and off the map. Yet, the more I think about it, the more I come to the realization that one third of the tracks are so far out that they lose the indefinable centering that makes some of the more outlandish They Might Be Giants tracks so pleasurable. Another third are so damned conservative that they lack the same spark. Thankfully, that still leaves a bunch of songs that are still damn good, and those alone make this a record worth listening to.