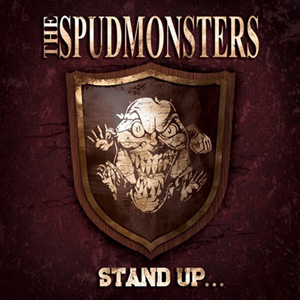 Maybe it’s me, but I don’t really understand what motivates a band with a sense of humor to stop making fun music. The Spudmonsters first album is loaded with amusing and fun numbers like “Garbage Day,” and “Repo Man.” Now, after over 20 years as a band–14 of which were spent on hiatus–they’re back with the seemingly dead serious Stand Up For What You Believe In. There’s no fun here, unless your idea of fun is moshing aimlessly to some of the most generic angry lyrics you’ve ever heard. Don’t get me wrong, Cleveland is the kind of place that can make you an angry, angst-ridden young man and want to take your emotions out in music. The entire metropolitan area has a long history of that sort of thing. However, the bands that have lasted have more to offer than simplistic moralizing and angst.

Certainly, it’s possible to take serious subjects and serious messages and deliver them in a way that is, if not humorous, at least more nuanced and subtle. I’m forced to point to the most prominent of Ohio rock bands, DEVO, as an example of delivering songs about serious subjects with a level of humor and nuance that is utterly lost on Stand Up…. That’s really what disappoints me when I listen to this album. It’s empty, angry posturing that goes nowhere and does nothing. Even the songs that aren’t angry and angsty in the traditional sense just are easily agreeable platitudes: “Stand Up For What You Believe In” and “Tolerance”. No new ground is broken here. I’m guessing the members of The Spudmonsters are in their early to mid–40s now, and if that’s the case, I imagine a large chunk of their fanbase are approaching that point in their lives. I’m in my late twenties, which the last time of your life when being angst-ridden is appropriate. When you’re older, it’s expected that you have a slightly more nuanced worldview, right?

All lyrics aside, the music is technically solid. These guys know how to play, but there’s nothing particularly catchy about the tunes, either. Most of them sound very similar. There’s little variation in tempo, chord changes, song structure… I think that I’m approaching the critique of the musicianship from a disadvantaged position. I’m not a Hardcore fan, and never really have been. Certainly, this is at least tolerable to listen to. The production is clean, the mix is done well. If you’re going to deliver lyrics that are meant to be taken seriously, they should be distinguishable, and they are to the degree that any growled vocal is distinguishable. I certainly won’t be able to transcribe any of the lyrics.

Competence, however, is not the same thing as quality. I’d happily listen to an album that’s not as competently performed and produced if the music was good and it spoke to me in a language that I can, if not understand, at least appreciate. What I get from Stand Up in the end, is simply 30 minutes of boring, cookie-cutter Hardcore music. If it will satisfy anyone, it’ll satisfy long-time Spudmonsters fans who have been jonesing for their band to produce something for a decade and a half. I can relate, believe me. For newbies, for other fans of Hardcore, and for schmoes like me who approach this record blindly, there’s better options. I’d go spin their first record, Stop the Madness. It has a lot more depth in its juvenility.