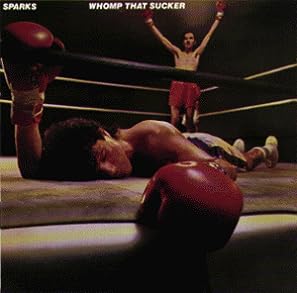 Cover of Whomp That Sucker (Reis)

Rev. Syung Myung Me:  It’s funny — I always think that Angst In My Pants came before this one.  I had to double-check before writing — and I’m hoping I didn’t plug Angst as next in the twitter-post-announcement thingy.  I wouldn’t put it past me, though.  I am kinda dumb.

ANYWAY: Whomp That Sucker.  It’s one of my favorites of this era (referred to as the KROQ era in No. 1 Songs in Heaven, as it was when Sparks finally broke in America, mostly due to the famous LA radio station), either that or Angst, which I tend to lump with this album, as I kinda mentioned above.  There’re a lot of really great, classic Sparks songs on this one — “Tips for Teens” — a great album opener, “I Married A Martian”, “The Willys” (which has the great line “It’s hard to explain/like Citizen Kane/To someone who’s blind”), “Don’t Shoot Me” and “That’s Not Nastassia”.  I particularly like that last one, with the phrase “Nastassianic ways”.

Whomp is just a really well-written and performed album; the backing band (pretty much copped in whole from the band Gleaming Spires) works perfectly for this sort of new-wave sounding Sparks — and Gleaming Spires tended to have a similar sort of sense of humor as well (as can be evidenced by their song and video “Are You Ready For The Sex Girls?”).  Whomp has everyone firing on all cylinders.  If you’re looking for the sound that broke them in the US, this is a great one to get.

Aila: Whomp That Sucker is one of the better Sparks albums, and the third in a series of great albums Sparks did around this time. It’s also something of a “return to rock” for Sparks, in terms of style, and a (slight) return to commercial success.

The album begins very strongly, with the energetic opener “Tips For Teens,” followed by one of Sparks’ strongest songs of any era in my opinion, “Funny Face.” The most immediately noticeable thing about these songs, other than the typical Sparks eccentricity and humor in the lyrics, is the different use of synthesizer and keyboard parts. Unlike the previous two albums, where the electronic instruments were very much the focus of the music, here they are used more in a manner that augments a fairly guitar-driven sound. This was fairly typical of a lot of the the new wave rock that flourished in the early 80s, but Sparks do it really well and of course with their own slant. Tracks 3 and 4 on this one, “Where’s My Girl” and “Upstairs,” are more frenetic than the first two songs, although they are probably both inferior songs to those. The album then slows down slightly and definitely becomes progressively sillier in terms of lyrics and themes, starting with “I Married A Martian” and ending with the closer, “Wacky Women.” None of the songs really qualify as “filler,” but it does wane a bit towards the end. The production is crisp and clean throughout, without going overboard (something which certainly did happen a couple albums later on Sparks In Outer Space).

Whomp That Sucker isn’t one of the Sparks albums I listen to all that often, but I always enjoy it a lot when I do. This album and the next one, Angst In My Pants, are very similar in style and it’s not difficult to think of them as two parts of a whole (this also makes sense with a few other consecutive Sparks albums – the first two albums, or possibly Hello Young Lovers and Exotic Creatures Of The Deep, for instance). It’s difficult for me to decide where this one ranks if I’m attempting to rank the Sparks albums (which I always kind of think about when I’m doing these mini reviews), but it’s definitely top 10, and I probably wouldn’t argue with anyone placing it in the top 5, although I’m not sure I would personally. By any measure, it’s a great album.