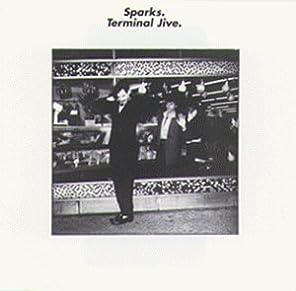 Rev. Syung Myung Me: In the process of doing this reviews, I’ve rediscovered Terminal Jive.  When I first listened to it, it was one of the albums that didn’t click — I liked “When I’m With You”, of course, but nothing else really leapt out at me.  Between then and now, I had a music drive crash and Terminal Jive was one of the casualties… but I didn’t realize that until I went to go to listen for this review.

So, I re-ripped it and listened to it again.  And, well, I don’t know what I was thinking.  It’s not quite as good as No. 1 In Heaven, but, well, very few things in life are.  But, honestly, this is a really solid record.  Yeah, “When I’m With You” is the strongest track — that doesn’t change, but then again, it really is a phenomenal song.  It’s worth having an instrumental version on the album just a couple tracks later.  But what surprised me is how good the other songs are.

“The Greatest Show On Earth”, “Young Girls” and “Noisy Boys” all popped out at me as being strong, classic Sparks songs, and the other tracks are great too — like “Rock ‘n’ Roll People In A Disco World”.  (I shall refrain from the cliche that this is an apt description of the album, since Terminal Jive combines rock guitars more in the mix than the previous No. 1 In Heaven.  Not because it’s not true — it is relatively apt, it’s just that everyone else does it.)

It’s surprising that this album didn’t really do anything outside of France — it tanked in the UK and wasn’t even released in the US until Oglio reissued all the albums on CD in the 1990s.  Perhaps it’s related to how it didn’t do anything for me the first few times — perhaps if the UK just went back to it after a while, it would have been accepted as the great album it is.

Aila: Terminal Jive is one of the Sparks albums that took a while to grow on me. At first listen, I wasn’t all that impressed, but after repeated listening I think it’s actually a very high quality album, at least in the top 10 or 12 (remembering there are over 20 Sparks albums to make the list).

As the follow-up to the magnificent No. 1 In Heaven, it was almost certain to be a bit of a letdown. Stylistically, it’s somewhat similar, but perhaps a bit toned down. If anything, this comes closer to being the Sparks “disco album” than the last one did. Which isn’t to say it’s standard genre music in any way (I don’t think Sparks have ever really done that), but it is distinctly more subdued than the previous record. The opener, “When I’m With You,” was the lead single from the album, and while I don’t think it met with a lot of success at the time, it does manage to be a very memorable track and an obvious highlight for the album. The lyric I always remember is “it’s the break in the song, when I should say something special – but the pressure is on and I can’t think of nothing special” – typical of the Sparks’ humor and not the first or last time their lyrics have referenced the song structure itself. The album then veers a notch or two down with the so-so “Just Because You Love Me,” “Rock and Roll People In A Disco World,” and the instrumental reprise of “When I’m With You.” The next track, “Young Girls,” is a very catchy song but the lyrics are certainly a little creepy (though the lyrics themselves seem to acknowledge this). “Noisy Boys” isn’t bad, but not one of the best tracks either. The second-to-last song, “Stereo,” is probably my favorite song on this album. It usually stays floating around in my head for a while any time I listen to this record. “The Greatest Show On Earth” is perhaps not the strongest song they could have closed with, but it’s still a relatively strong finish.

Overall, Terminal Jive is a really good Sparks record. It isn’t their best record, and it’s not even in the top 5 or so. But a really good Sparks album is probably a great album by just about any other measure. It’s one of a group of four or five records from this time period that represented something of a resurgence for Sparks. I don’t know if I’d suggest a new fan start with this one, but I think even a casual fan of Sparks would enjoy this.