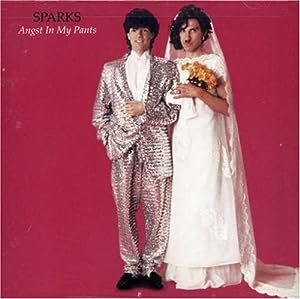 Cover of Angst in My Pants (Reis)

Rev. Syung Myung Me:  As I mentioned last time, I tend to lump Angst In My Pants in with Whomp That Sucker.  It’s really hard for me to say which is better.  If you put a gun to my head, I might say Angst, even, but it could change depending on the day you asked me.  It DOES have 11 tracks, after all, to Whomp’s 10…. but then, Whomp is longer by two minutes.  Either way, let’s just say you should get both.

Seriously, though — lots of great songs on here.  The title track, of course, with its almost-pun is definitely a winner (and sometimes almost-puns are better than actual puns).  That, and it’s probably the only pop song I know to use the word “Dramamine”.  It’s also got “I Predict” (with a music video directed by DAVID LYNCH!), “Sherlock Holmes” (also covered well by the Dirtbombs on We Have You Surrounded), “Nicotina”, the tale of an anthropomorphic cigarette, “Moustache”, “The Decline and Fall of Me” and “Eaten by the Monster of Love”.  Are there any bad tracks on this thing?

If forced — “Mickey Mouse” and “Tarzan and Jane” do the least for me… but they’re still good.  And “Sextown USA” is one that, if Sparks are going to have a guilty pleasure, which I’m not sure is even possible, it’s probably that one.  It’s really goofy, but fun, and the hook is undeniable.  (Sorta like “All You Ever Think About Is Sex” from In Outer Space — I think I just find it weird when Sparks are so upfront about scoring.  But then, it doesn’t twig anything in “Instant Weight Loss”, so perhaps it’s just that word.  Who knows.  I apparently have weird issues with sex, but only when it’s mentioned by a Mael.)

Anyway — this is another one you can’t go wrong with, and more proof that this lineup, the Gleaming Spires lineup, was one of the best Sparks had — and finally, the beginning of Sparks breaking in the US, which was well deserved.

Aila: Angst In My Pants continues the excellent run of form Sparks were on in the early 80s. It’s a very natural follow-up to Whomp That Sucker in terms of style and lyrical silliness, and it’s arguably the slightly better record.

The sound of this album builds on the synth-enhanced “new wave” style Sparks had begun on their last album, increasing the keyboard elements and slightly toning down the guitars. It works really well on this record, and I personally think this was the perfect balance for this era of Sparks – a little less conventional than Whomp, but not yet veering into the total plastic sound of Sparks In Outer Space. One of the only really negative things I can say about this record is the sound quality – I’m not sure whether it’s an issue of production, mastering, or some combination thereof – but it is a little “off.” It sounds ever so slightly muddled and noticeably “tinny” to my ears. If there’s any Sparks album that could seriously benefit from a remaster, this is the one for me. Of course, this only slightly distracts from the quality of the songs themselves.

The opening title track and the first couple songs to follow are very strong, while setting a very silly tone in terms of lyrical content. This is definitely the silliest album Sparks had made up to this point. While absurd humor is one of the essential things I love about Sparks, on this album there are actually a few moments I wish they’d toned it down a bit, or at least better focused it somehow – “Mickey Mouse” springs to mind. Not that I have anything against the character in particular, but unless you’re advertising for Disney it seems like a bit of a lame subject and the lyrics are a bit throw-away to be honest, which is a shame because the sound of the song itself suggests something better. That said, I actually like the song (no, really). There are a few other moments on this record where the same thing could probably be said of different songs, but in general these are minor quibbles. These are fun songs which are obviously not meant to be taken too seriously in terms of lyrics. In fact, my favorite song on this record might actually be “Moustache” – a patently absurd song that manages to work very well (at least in part) because of the lyrical absurdity, not despite it. Ron Mael finally wrote a song about his most beloved feature – and I’m surprised it’s apparently the only one, frankly. If I had to pick a couple other favorite songs on this, I’d probably go for the ridiculous-but-fun “I Predict” and the strangely-accented “The Decline And Fall Of Me.” The weakest song is probably “Tarzan and Jane,” which isn’t to say it’s a bad song, just the weakest link in a strong group.

Angst In My Pants is another of the Sparks albums that’s really difficult for me to rank in the overall Sparks albums “pecking order” (something which probably only exists in my mind anyway). Suffice it to say, it’s definitely high on the list. In fact, there are probably a fair number of fans who would say this is the last great album Sparks did for about a decade, and I wouldn’t completely disagree (although I probably will attempt to disagree – at least somewhat – in my next album review).

Cait: So, this was my “It’s Hitler on the telly” moment: It’s May of 1982 and I’m sitting in my three-foot-by-four-foot bedroom in our little trailer in Phoenix, watching Danny DeVito on Saturday Night Live. There was a particularly ripping Doug and Wendy Whiner sketch, as I recall. And then it’s time for the musical guest, and this weird, skinny, Hitler-y looking character comes out and starts giving an awkward recitation–facts about “the mouse”. “The mouse is responsible for much of the world’s pestilence and destruction….when the mouse is not scaring women, eating saltine crackers from cupboards, or ingesting huge amounts of saccharine in laboratory experiments, the mouse has been known to enter the world of entertainment…” DeVito just stands there, slack-jawed, and I’m sure I was in front of the tube doing the same exact thing. Then they launch into the song–there’s this whirling dervish in this oversized sequined suit, and there’s all this weird grimacing and interplay from the Hitler guy, and the song is relentlessly catchy and I’m just gobsmacked. I don’t know what the hell I just saw but I’m completely smitten. The rest of the show I’m just wanting the skits to get the hell out of the way so I can see that band again. The second song comes on–finally I catch the name of this weirdo band, “Sparks”–and it’s even weirder. The singer is out there doing regular rock star stuff, and Hitler stands there in a fishing cap looking annoyed. “Is this a skit?” I ask. “This cannot be a real band.” Because honestly they’re too good to be a real band. Too funny, too catchy, too inventive, too warped, too great.

At some point I discover they are indeed a real band, and in LA that summer (at the Montclair Plaza mall!) I finally get my hands on their real album–Angst In My Pants. And it’s still “Sparks” for me. They have a 40 year career, they’ve done so many different styles and genres and I love them all, but Angst is my Sparks. KROQ kept relentlessly playing the Angst stuff (and of course those delicious, elusive cuts from Whomp That Sucker, which I didn’t own for years after that). I didn’t ever even think of it as separate tracks–it was one whole thing, which I loved without reservation. Looking back, the title song has the most emotional impact for me–so much so that I wanted to use it as the opening for my twee autobiographical motion picture, and even wrote a Sparks cover band into the script which I wanted Ron and Russell to actually play. “I Predict”, “Mickey Mouse”, “Sextown USA”, “Moustache”, “The Decline and Fall Of Me” and “Eaten By The Monster Of Love” are all untouchable. (To echo Aila, I can’t believe Disney hasn’t used “Mickey Mouse” in a commercial yet–as a Disneyland fan, a Sparks nut and a KROQ kid it’s my perfect song–but then I don’t understand why Pep Boys hasn’t co-opted the Dickies’ “Manny, Moe and Jack” yet either. Missed opportunities, corporate dudes!)  Listening to Angst now, “Nicotina”, “Tarzan and Jane”, maaaaybe “Instant Weight Loss” strike me as tracks I might have skipped, if skipping was possible back then. And honestly I’m glad it wasn’t. The beauty of Sparks is the diversity of their songs, and having to “slog” though offbeat gems in order to get to the “hits” was key to my musical development. I seem to vaguely recall seeing the “I Predict” video some late evening on Night Flight that summer but I know it was “banned” or something and I may be misremembering. It wasn’t until last year that I learned it had been directed by David Lynch and when I found out, I just sort of nodded knowingly. That’s another part of them that’s so great–it’s a complete package. The performance persona/”characters” of Ron and Russell, the art direction, the lyrical wit, the compositional complexity, the hooks, the showmanship…ah, Sparks. I was so in love with them for a couple of years after this. And then you know what happened? They went and put out “Cool Places”. And I literally completely forgot about the band that put out Angst and went–”Whoever that band is that put out “Cool Places”, I effing hate that band.” And it was quite a few years before I fell back in love with them or even attempted to listen to them again, such was my loathing of that song. But that’s a story for a later day. I love you, Ron and Russell! (ahem…couldn’t help myself, sorry…)