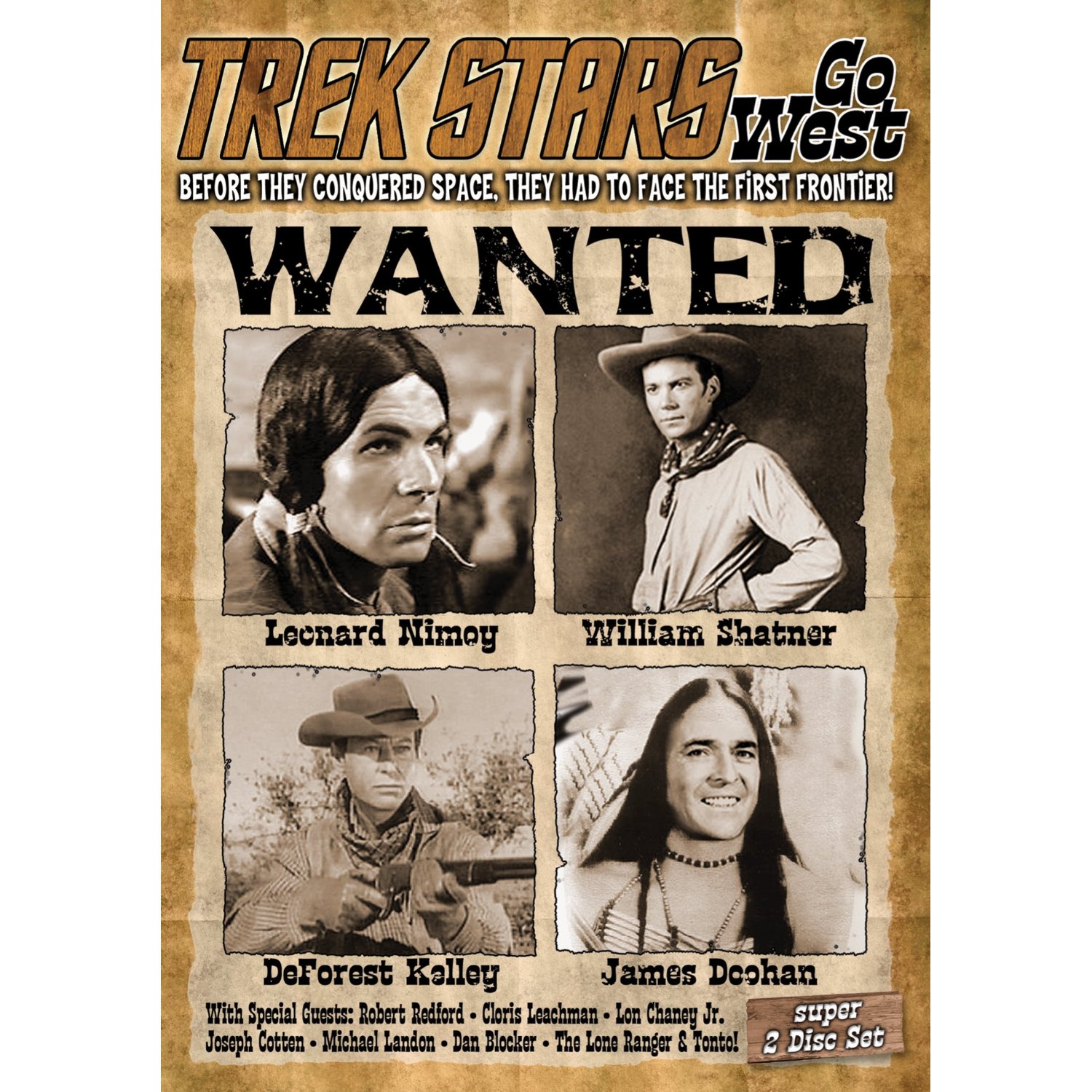 It’s not difficult to find the reasoning behind a compilation like Trek Stars Go West – it’s a well-known fact that when Gene Roddenberry first came up with the concept behind the original Trek series, he described it as a western set in space. (At the time, that was like selling your pitch by comparing it to a cop show – you couldn’t throw a stone in an electronics store in the 60s without breaking a screen that was showing a western.)  It’s not surprising that the cast they chose had a certain amount of experience playing cowboys and Indians, and pulling some of that earlier material together seems like an easy sell to old-school Trekkies; and I’m sure, a sell that didn’t involve a whole lot in licensing fees.

What is a little bit tricky, though, is being handed a two-disc set gathered from westerns filmed in the 50s and the 60s and writing it all into a review. The source material is what it is, simplistic storylines, inherent racism / sexism and all – but you know that already. If you want to read a cultural analysis of the genre, there are any number of good books / websites available. So I’m assuming what you really want to know about this set is: do the selections included actually have any relevance to fans of Star Trek (TOS) and the actors involved, and is it all put into a package worthy of your hard-earned dollars?

The set includes seven episodes (one is a two-parter) from five western TV shows – Tate, Bonanza, Outlaws, The Lone Ranger and the series version of The Last of the Mohicans, and one film – White Comanche, a Spanish-made movie William Shatner did during a series break during Trek’s original run. It’s a pretty representative collection that spans from the more mythical / superheroic with the Lone Ranger and Tonto, to the more realistic (and actually pretty well-written) series Outlaws, to the spaghetti-westernish excesses of the film. You aren’t getting anything quite as classic as John Ford here or even John Wayne, but you can see some direct parallels in the themes and acting style between what we’re given and classic-era Trek.

However, the title of the collection does imply that you’re going to see the earlier work of the ‘stars’ of Star Trek, so it’s not enough to just give you a sampling of the genre. There were already plenty of collections that could provide that – you make the connections to the voyages of the Enterprise either way. But as for the promise of seeing your favourite stars get a lot of screen time, you’re only going to really be happy with the amount of Shatner provided (that is, assuming you do like Shatner, which I do) – the selections that supposedly ‘co-star’ Leonard Nimoy, DeForest Kelley and James Doohan are for the most part in very minor roles indeed. I’m assuming this was a rights thing – all three have a wide range of screen credits that would have fit, and I’m assuming some of those must have been in larger roles. So I’m left feeling a little bit like they simply shoehorned in whatever they could get most cheaply.

Again, the selections featuring William Shatner aren’t bad (even though White Comanche is often listed by critics as a stinker on the level of Plan 9 From Outer Space, I actually enjoyed it), and you can see a lot of the roguish charm that he brought to Captain Kirk on the screen. He’s always had a strong screen presence regardless of the material, and it shines through particularly in the episodes of Outlaws where he was featured.

As far as the actual presentation of the material goes, this is where the set really falls short. I won’t blame them for the transfer quality to a great extent, because I’m sure the source material wasn’t the best – but some sections are really painful to watch. The poorly-Photoshopped cover is magnificent when compared to the menus on the discs themselves – I’m quite certain my mother’s home movies have a more professionally-designed menu, and of course there’s no additional information or special feature included at all, not even any real liner notes beyond brief descriptions on the back of the case. I really don’t feel any love, or even mild interest, here – they’re simply after your money and this was a novel way to try to get it.

It’s really a shame, because I do think there could be a well-produced, documented, intriguing package put together to bridge the gap for Trek fans – particularly those with no real exposure to the westerns themselves – between these shows and the series they came to love. But if Trek Stars Go West made any real attempts in that direction, they were highly flawed and hampered by cheapness. If you can get this collection for five or six bucks (it lists on Amazon for seventeen), there might be enough to interest you, but I can’t really recommend it.