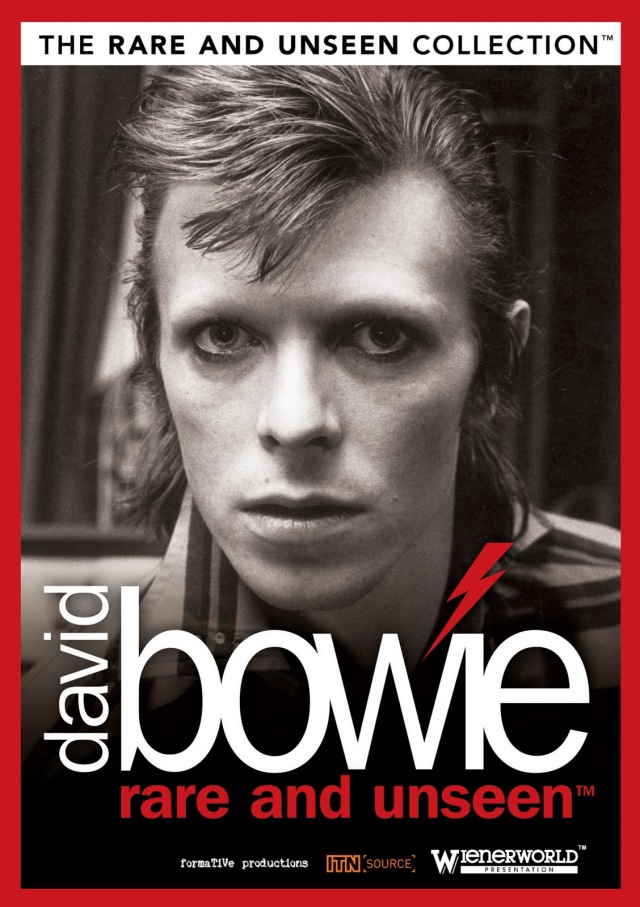 David Bowie’s one of the most interesting artists, and has been for about 40 years.  This is not news.  In fact, it’s too bad that he hasn’t done a new record since 2003’s Reality (his follow-up to the brilliant 2001 Heathen) — I’d love to hear where his head’s at now, aside from guesting on SpongeBob in somewhat of a Yellow Submarine riff.  Since Bowie’s been quiet of late, we can keep going back to the past and discovering more about what’s already come.  The deluxe version of Station to Station is good for this, as is MVD’s new DVD David Bowie: Rare and Unseen.

Rare and Unseen is a little under an hour of various Bowie interviews from a few different eras — there’s the Station to Station/Man Who Fell To Earth interview with Russell Harty over satellite, a Never Let Me Down interview (or perhaps EPK?), and a later era one promoting Earthling that acts in particular as a commentary on his earlier interviews.  The editing job on these is, for the most part very well done.  The interviews tend to dovetail without being redundant — and it helps that he’s a personable, hilarious sort — particularly in the later interviews, where he’s more relaxed and comfortable with himself.

To be honest, there aren’t a whole lot of revelations here — but it’s always enjoyable to see Bowie.  The Russel Harty interview takes up about half of the program — at first, he comes off a bit like a twit asking stupid questions and trying to be funny and failing… but eventually Harty and Bowie end up being comfortable with each other and it ends up being pretty good.  I’d love to have seen the promised follow-up interview, where Bowie promised more time to talk about more serious topics like spirituality and whatnot.

There aren’t a lot of problems with this disc — there’s one part about 45 minutes in that strangely repeats interview footage shown earlier featuring John Landis and Julien Temple.  The only other problem is that there are a few bits edited in rather awkwardly of a fellow named Steve Riks doing a goddawful Bowie impression on Bowie songs.  Riks tends to get the bombast of Bowie’s vocal style without any of the nuance or, well, skill.  I understand that the rights to the actual Bowie audio would be prohibitively expensive, but, honestly, it’d have been much better to forgo these clips set to Bowie’s music videos entirely.

Overall, though — I’d enjoy seeing more of the Rare and Unseen collection.  If you’re a Bowie fan, it’s definitely worth a look, and they actually do a decent job with the video quality, considering the nature of the sources being mostly ethereal news reports and chat shows never really intended to be seen 20 years on.  It might not be an essential addition to a Bowie collection, but it’s definitely enjoyable.