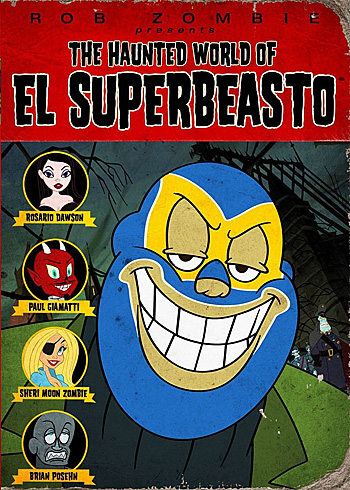 The great thing about animation is that it can be used to depict just about anything. Whether the work is crafted using traditional hand-drawn art, computer-generated imagery, models or any combination thereof, the result is always something that just can’t be captured with live action. Provided, of course, the filmmakers put any imagination into it.

There is certainly no lack of imagination in The Haunted World of El Superbeasto. There are no boundaries, either. The fact the film was directed by Rob Zombie (and adapted from his comics) should be enough of a warning, but if it isn’t, just consider this: a close-up shot of a man’s unwashed foot and his chipped, infected toenails is one of the less-disgusting images you’re going to run across.

This film has been described as Spongebob for adults, or Ren & Stimpy meets and gets it on with the lovechild  of Ralph Bakshi and Heavy Metal. Let me put it another way: it’s not for kids.

In fact, this film isn’t for most adults, either. The extreme gross-out humor, frequent nudity and in-your-face violence have many convinced this is purely a teen’s movie. However, most teens are likely to miss the references to old cinema’s horror flicks and yesteryear’s pulps, as hard as it is to believe that a movie written by Zombie and rowdy comedian Tom Papa could have any subtlety. But then, anyone who knows anything about Zombie is aware of his love for the classics, and how cinema’s horror greats have inspired not only his music, but his drawings, writings and videos as well.

The movie even opens with a parody of the warning that accompanied 1931’s Frankenstein picture, in which an impeccably-dressed gentleman warns the audience that what they are about to see could shock them. Karloff’s Frankenstein isn’t likely to shock a modern audience, but by God, El Superbeasto just might.

So what exactly is this movie about? That’s the real kicker. The story doesn’t matter. The story is an excuse to show everything the movie shows. It’s not about the story. It’s about watching 77 minutes of what happens when filmmakers get gleefully carried away. But there is something resembling a plot: the nerdy evil scientist, Dr. Satan (voice of Paul Giamatti), wishes to have the ultimate power (“All the sudsie powers of HELL!”), and to get it, he needs to find a woman with a triple-six birthmark on her booty, marry her at a specific time, and… you’re rolling your eyes already, aren’t you?

It’s not worth sweating the details. We don’t really care if Dr. Satan succeeds or not. We just love hearing Giamatti go so overboard with his role, and oh, does he go overboard! But then, so does pretty much the rest of the cast, and if you listen carefully, you’ll hear the voices of Cassandra Peterson, Laraine Newman, Dee Wallace and Clint Howard pop in. This movie is all about excess, and if excess is your thing, this is the perfect movie for you.

Basically, Dr. Satan’s target is a foul-mouthed topless dancer named Velvet Von Black (Rosario Dawson), who also happens to be the target of the title character’s boundless lust. Beasto (Papa), a luchador with bad taste and worse manners, just happens to witness Velvet’s kidnapping by Dr. Satan’s intelligent servant ape, Otto (Spongebob‘s Tom Kenny, who performs several other voices in the movie as well), and decides that saving her and getting a “reward” just barely wins out over devouring a plateful of hot wings. And this is long after the movie has already sunk to the low, low depths it will joyously sink to again and again.

Beasto is all brawn and no brains, and decides to enlist the help of his quick-witted, impossibly-stacked zombie-killing sister, Suzi X (Sherry Moon Zombie) and her perpetually horny robot Murray (Brian Posehn). Of course, Suzi and Murray already have their hands full, as they’ve abducted the animated head of Adolf Hitler and are on the run from the Nazi Zombies and their Commandant (Rob Paulsen using his hilarious Dr. Scratchensniff voice). Yes, it’s every bit as ridiculous as it sounds, but if you’re still reading this, you’re likely going to be laughing too hard to care how absurd this so-called story is anyway.

Beasto stumbles his way through every situation with bravado and non-stop chatter, pausing only to yell at his agent over the phone or oggle the closest hottie he sees. He’s all too happy to get into a scrap, and is clearly a student of the “shoot first and ask questions later” school of thought, though his sister seems to be no better in that regard, in spite of her greater success at gathering information. He’s strong enough to take out a foe five times his size, and he’s already a pretty big boy himself. He’s also not afraid of using whatever is handy for a weapon, even if it happens to be a new acquaintance whose most prominent characteristic is an over-sized scrotum, which holds a pair of solid metal testicles. And when a girl he’s getting freaky with falls under the influence of the full moon and morphs into a five-headed monster, the ceiling fan becomes his best friend, and the result is a torrent of blood sufficient to cover the camera (though Beasto at least has the decency to walk over and wipe the lens off a moment later). Pretty much the one thing Beasto truly fears is his Uncle Carl (Jess Harnell), who farts rats. Don’t ask.

On top of all of this insanity is a series of songs to accompany the, er, action. The songs, which more-or-less tell the story as it’s happening, were composed and performed by Chris Hardwick and Mike Phirman, a duo known as Hard ‘n Phirm (get it?). These increasingly goofy tunes tell us the details of Dr. Satan’s rise to demonhood, and tell us it’s okay to stimulate ourselves while watching cartoon women fight each other, since “the Japanese do it all the time.” Even the Nazi Zombies are given their own theme music, which sounds like what the Beatles might have composed if they’d taken even stronger drugs.

Obviously, this sort of movie isn’t going to win any awards (unless it’s the Way Too Over The Top award, which it would win in a heartbeat), but no matter. It’s a fun escape into sheer madness that anyone with a love for this kind of humor will get a big kick out of. And if it becomes too much for you, well, as the impeccably-dressed gentleman said, we warned you.