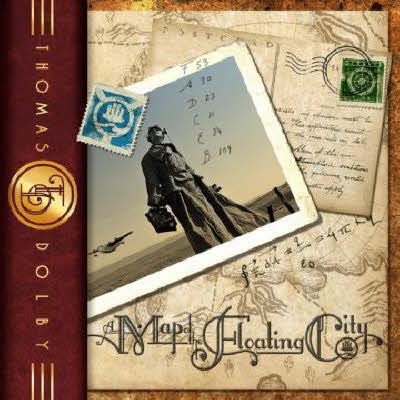 When you haven’t released a new album in nineteen years [1], it’s a bold statement to open with a song called “Nothing New Under the Sun.” Amidst wobbly bass synths and brassy horns, the synthetic pop sounds of Thomas Dolby are familiar comfort to anyone who has heard his more famous works of the early 80s. When paired off with the arabesque “Spice Train,” and its meaty dance beat, one might be fooled into thinking Dolby’s back doing that same thing again. As Thomas tosses out a quip of “Hey, any fool can write a hit,” in “Nothing New Under the Sun,” and he should certainly know. We’re a long way from “She Blinded Me With Science” here, though.

Thomas Dolby may have the reputation as a synthesizer whiz and a musical boffin with an army of keyboards and other gizmos at his disposal, any deep exploration of his music reveals a gradual move towards a more organic sound. Dolby’s last record, Astronauts & Heretics, began with a chorus of fiddles in “I Love You, Goodbye” part of a host of instrumentation across the record that varies between real and close enough to be real. The remainder of A Map of the Floating City is much more of the same as Astronauts & Heretics, picking up right where Dolby left off in 1992. Along the way, he tackles everything from cocktail jazz to American country, showing off his range to excellent effect.

Floating City is split into three thematic sections: Urbanoia, Amerikana, and Oceanea. Each was also meant to be a stand alone EP, but the Urbanoia tracks ended up being integrated into Thomas Dolby’s A Map of the Floating City interactive game. While the release strategy gave hardcore fans a chance to get their fix of new Dolby music before the album’s release, it does mean that for those who have heard the EPs and played the game there are few surprises left on the album. Surprises still abound for the uninitiated from the “brand new mash of bluegrass and techno” on “Toad Lickers,” to the sanguine piano and violin melancholy of “Love is a Loaded Pistol,” and Regina Spektor’s Michael Jackson-esque backing vocals on “Evil Twin Brother”. There’s enough variation in style and tone to keep you interested, though it does make for a bumpy ride at times.

This even extends to the album’s thematic parts. “Spice Train” is incongruous among the jazz influence of Urbanoia, while the lyrical themes in “Simone” contrast with the rest of Oceanea. They’re not bad songs though, and they work well on their own or with their companion EP. Perhaps a re-sequencing of the songs would have made the album a more cohesive piece, but it’s components are still top notch. At least Dolby smartly saved the best track for last. The album’s heart is all wound up in the final song, “To the Lifeboats”. It’s easily Dolby’s most epic piece since “Budapest by Blimp,” though far more intense. See-sawing from calm and melancholy to the heart of a maelstrom and back again, it’s proof that Dolby hasn’t lost his edge despite his time out of the studio.

It’s great to have Thomas Dolby back. Whether you’re been (im)patiently waiting, tracking the album’s progress and listening to the EPs, or taken completely by surprise by his return, A Map of the Floating City is worth the wait. Fans of his more electronic efforts may be surprised by the variation in song styles and genres, but all the elements that make Dolby’s work so compelling are here: inventive arrangements, rich storytelling lyrics, and an indescribable sense of fun that permeates even the most melancholy songs. For fans, this is indispensable. For the casual listener, you’ll be surprised by what this old master of the synthpop genre still has up his sleeve. I just hope there isn’t another nineteen year wait for the next one.