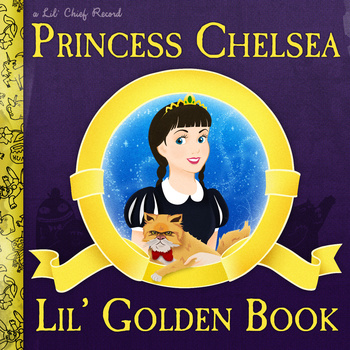 It’s odd what childhood cultural touchstones we take for granted–and odder still when we learn about cultural differences and find out those odd little true commonalities. Case in point: I didn’t even know they had Lil’ Golden Books in New Zealand. The name alone should bring back memories of the little cardboard books, designed to take the abuse of children while delivering sappy moral lessons and teaching basic language skills. It’s an appropriate title, as moral lessons are a big theme on this debut album by Princess Chelsea. Lil’ Golden Book is loaded with numbers on the dangers of cigarettes, begging someone to cut down on drinking, best friends falling in love with older guys, monkeys stealing bananas…

All of this is presented through music that sounds like lullabies for The Addams Family. The combination of minor key organ and piano, tinkertoy percussion, and the cold, short-range vocals combine to form a compelling off-kilter pop sensibility. The nearest I can come to describe it is the pop-sensibility of Takako Minekawa mixed with the sinister overtones of The Residents in their Duck Stab period–or possibly the their Goosebumps songs. However, it’s Chelsea’s vocals that really complete the package. The childlike tones evoke the innocence necessary to make the simple lyrics work. In another Residents comparison, her voice is reminiscent of long-time Residents collaborator Molly Harvey’s vocals on songs from Demons Dance Alone.

“Cigarette Duet,” which features additional vocals by backing musician Jonathan Bree, was picked as a leadoff single–and it’s a good example of what Lil’ Golden Book is about, but the heart of the album lies in the second track, “Yulia.” While, stylistically, it’s a departure from the cold organ-drenched tracks that make up the majority of the album, with an organic, sparsely mixed piano, upright bass, and drums. “Yulia” is sung from the point of view of a young girl trying to understand her friend’s romantic relationship with an older man touches on a universal nerve of abandonment. The sparse(r) backing music drives the message home. Other high points are “Monkey Eats Bananas,” “Ice Reign,” and “Overseas.”

If there’s a weakness to the childlike style and themes, it’s that sometimes the music and the lyrics can be a bit too simple. Many of the song lyrics rely on those basic moon/June/spoon rhymes and the stories they tell can lean bit too hard towards simplistic moralizing. It’s possible this was a deliberate stylistic choice, and when it works it works well. It leaves a lot of depth that can be explored in future albums–and I eagerly await their arrival. I can’t wait to hear what happens when Princess Chelsea gets a chance to hone her craft and make something even more amazing and distinct. The promotional materials describe Lil’ Golden Book as stories of “growing up in modern New Zealand,” but like those Golden Books, they’re more universal than one might imagine.