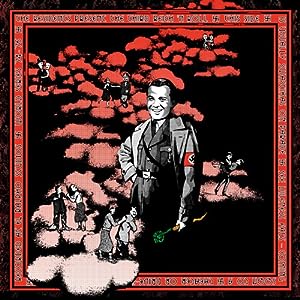 So, we’re stealin’ the idea from the Sparks Project and doing one with probably even more records out there — The Residents!  And this time we’re changing it up a little bit — we’ve got two hardcore Residents fans in me and Rich, but Aila is, at best, a casual fan, who will be hearing about 99% of these records for the first time.  PLUS SPECIAL GUESTS! DANGEROUS!  So, enjoy, THE RESIDENTS PROJECT!

Richard J. Anderson: If you look over the output of The Residents, you’ll notice that they do a lot of cover songs. I mean, whole albums’ worth of cover songs. They have albums devoted to covers of George Gershwin and James Brown, Hank Williams and John Phillips Sousa, and Elvis Presley… all of which we’ll get to in time. Pointing a funhouse mirror at the music we all know and love is how the Residents like to roll, and they’re still at it. Their latest project, a stage show called Randy’s Enchanted Evening features the Singing Resident hollering his way through rock standards, but The Third Reich ’n Roll is where it all extends from. This was one of the first Residents albums I ever picked up. I’m a sucker for covers, deconstruction, and parody. Growing up on “Weird Al” Yankovic probably helped. Ostensibly the point of the exercise is to make some kind of commentary equating popular music with fascism. The cover depicting Dick Clark as a Nazi probably makes this point best.

Recorded in 1974, “Swastikas on Parade” starts with a sample of the German language version of Chubby Checker’s “Let’s Twist Again,” making the rocker sound more like a military drill sergeant. That segues into a cover of “Land of a Thousand Dances,” that’s more or less pure percussion and vocals. Every so often, the medley devolves into the sound of gunfire, diving planes, and sirens, as if to put the listener in the middle of a musical war zone. Sonically, this side is very much in the same vein as Meet The Residents as it was recorded around the same time, and you can take that as either an endorsement or a critique, depending on your own views on that disc. It’s not like extending that album’s “Boots” to a full LP side, but close. Somewhere in that mix, by the way, is a cover of “Double Shot (Of My Baby’s Love),” a song we’ll revisit in the future. Meanwhile, the German version of “Papa’s Got a Brand New Bag,” with a sample of the original horns, comes off more as a nightclub act from the 40s than the funk classic. When combined, you get something both disturbing and compelling.

“Hitler was a Vegetarian,” on the other hand, is more in line with the style of Not Available: more synthesizers, better playing, and easier on the ear—relatively. One its high points is the spoken word bit where the singer of “96 Tears” consoles the singer of “It’s My Party,” which serves as a lead-in to “Light My Fire.” I love how the synthesizer player charged with the famous “Light My Fire” organ decides to completely disregard Ray Manzarek’s playing, and just do something simple with ascending notes. The Residents were not really good musicians yet, even with the original recordings as a guide. Overall, I’m not sure how The Third Reich ’n Roll stands up on a conceptual level, but it’s certainly interesting and fun listening. You’ll laugh, you’ll cringe, you’ll play “What song are they actually playing?”—especially when they layer a couple songs on top of each other in the finales of each medley. Give it a try.

Rev. Syung Myung Me: This is one of my favorites, but it might not be the best place to start. The conceit/story for the album is the Residents put a medley of bubblegum pop hits on one track of an 8-track recorder, recorded stuff over the top to go along with it, and then erased the original track. The album is two suites (each taking up one side of the original LP), “Hitler Was A Vegetarian” and “Swastikas On Parade”. Though the original album didn’t have a side A and B labeled—it was just “This Side/That Side”, “Swastikas” is the clear A-side and “Hitler” is the obvious B-side.  “Hitler” also provides a magnificent ending — a combniation of “Sunshine Of Your Love”, “Sympathy For The Devil” and “Hey Jude”, with the excellent guitar line that perfectly combines the songs. That is basically worth the price of admission alone, but most of this album is really good.

The Third Reich N Roll is also the name/source for the Residents’ first music video (and one of the first music videos in general), available on the Icky Flix DVD… or at MoMA if you happen to be in New York.  The video, cut together from the “Land Of 1000 Dances” portion of “Swastikas On Parade”, features the Residents in Newspaper Klansman outfits miming to the track, followed by giant meat costumes crushing a swastika, and a second band line up featuring a couple TVs.  Trust me, it works.

The Residents also recorded a teaser single of “Satisfaction” for this album—sort of a concept-distillate that’d fit on a 45; “Satisfaction” is much darker and scarier than any of the actual album, though, which is relatively friendly comparatively.  One of the CD issues of Third Reich has the “Satisfaction” single on it — though most of the in-print editions do not.  That said, “Satisfaction” (and its’ non-cover b-side “Loser Is Congruent To Weed”) have appeared on many best-of compilations for the curious.  Still, it’s an odd album that is more accessible than its teaser single.

Aila: I had thought Third Reich N’ Roll was one of the Residents records I had heard. Listening to it now, I’m not so sure about that. If I had, I suppose it’s not a good sign that I found it so forgettable. Although that might be due to so much of the Residents music being similar (in my novice opinion), not really a reflection on the quality.

This is a very silly album. It’s basically a collection of very warped cover versions, which openly mock the source material. It’s often amusing and entertaining, although to be honest it gets a bit grating after a while, and it’s not an album I would imagine re-listening too very often. Another component of this is the fact that it’s grouped into just two extra-long tracks. The first track, “Swastikas On Parade,” sounds as if it were made by a stereotypically ‘special needs’ person who might have inherited a fortune and built a recording studio to do covers of their favorite songs. It starts with a sample from an original German version of one of the countless permutations of Chubby Checker’s “The Twist” (something which is absurd itself – Chubby Checker’s career has basically been a long exercise of flogging the dead horse of his one original hit song, but that’s besides the point). It then moves on to abbreviated covers of various other popular songs from a range of around 20 years before this album was made in the mid 1970s, including “Bony Moronie” and “The Letter.” Musically it’s pretty abstract, which is to be expected, and the extensive editing I imagine must have been needed to assemble this track works fairly well. The second track, “Hitler Was A Vegetarian,” is very much along the same lines, although perhaps slightly less abstract musically. It’s also often very funny, with the cover of “Yummy Yummy Yummy” standing out as a particularly effective mockery in my mind.

My overall assessment of Third Reich N’ Roll is that it’s an entertaining album well worth listening to and definitely good for a few laughs if you’ve got the right sense of humor. However, it’s also a reasonable candidate for the soundtrack of an eternity spent in Hell, played in a loop. I wouldn’t recommend listening to this all that often, unless you’re insane or would like to become insane (in which case – I highly recommend it!). That said, The Residents did a good job on this one, as I suspect that’s the sort of reaction they were hoping for.