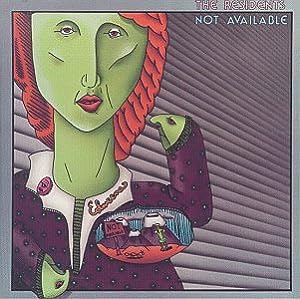 Cover of Not Available

So, we’re stealin’ the idea from the Sparks Project and doing one with probably even more records out there — The Residents!  And this time we’re changing it up a little bit — we’ve got two hardcore Residents fans in me and Rich, but Aila is, at best, a casual fan, who will be hearing about 99% of these records for the first time.  Also, sometimes special guests!  DANGEROUS!  So, enjoy, THE RESIDENTS PROJECT!

Maddie: So The Rez’s second album was infamously recorded under N. Senada’s theory of obscurity which states that art is at its most pure and free when produced with no intention of it ever being released. The best stuff is so obscure, you’ll never get to see or hear it, guys! Sure enough, it was released, allegedly without their consent thus the theory of obscurity remains intact. Later editions do state that they didn’t initially release it because they felt it to be too personal and revealing. Either way, it’s probably the most oft quoted and compelling piece of Rez lore, aside from their identities.

Obscurity comes into its own again with the lyrics. The album is presented as a four part piece with a supposed narrative and various characters but the abstract lyrics leave us with only a fuzzy and dim idea of what’s happening. Despite the lack of reason, the rhymes are often enough. I adore lyrics that can move one emotionally while still being abstract and this is a wonderful example. Narrative and structure is really overrated. I’ll take texture any day.

Musically, overlapping rhythms, synths and acoustic instruments create a dense and highly textured soundscape quite unlike any you’ve ever heard. At times discordant, flashes of beauty permeate the noise, most notably a soaring and distant saxophone and a battered but loved sounding piano. The music finally stops fighting itself and pulls together to build to the soaring climax. Quite possibly their most haunting and beautiful pieces, it’s certainly one of my favorites and has formed a large part of my musical awareness since I first heard it, some fifteen years ago.

Richard J. Anderson: I’ve often heard Not Available described as the magnum opus of early Residents albums. I’m not entirely sure I agree. Part of its exalted status might be the story behind it. It was intended that the album not be released until the band forgot about it, in accordance with the Theory Of Obscurity, one of the two guiding principles behind the music of The Residents. The Theory of Obscurity states that an artist releases his best work while still obscure, unknown, and free of audience expectations. Not Available was meant to be the logical conclusion of such a line of thought. The other main theory behind The Residents work, by the way, is the Theory of Phonetic Organization, wherein a musician should first determine the sounds of their music, then build a piece around the sounds, rather than the other way around. Now that you understand these concepts, the work of the early Residents should make a bit more sense—but only a bit.

Not Available is sort of an avant-garde rock opera-cum-love story. It’s the embryonic form of the musical storytelling that would become a Residents trademark on albums like Eskimo, Mark of the Mole, God in Three Persons, and most of their recent works. If you’re the kind of nut who wants to jump into the deep end, I suppose you could start here. Musically, it’s a lot more coherent than Meet The Residents, both in terms of structure and performance. The story concerns Edweena, a young girl who goes off to college with, uh, a “Porcupine whose name was known as knowledge”. They seem to have a relationship that may or may not be metaphorical, and there’s an Enigmatic Foe, and a conflict, and occasional asides from Uncle Remus… Look, it’s all there in the lyric sheets. I’m not going to say it makes sense, but I don’t think the point was to tell a coherent story through the lyrics alone, which are overall rather abstract and poetic anyway. It’s a bit of a triumph, though, in the way that everything manages to make sense in the head without making sense on the page. The music helps this, ranging from soft little piano and synthesizer ballads, to discordant free jazz, and back, reflecting the emotional tone of the story.

It’s amazing that a band that produced such plonking, plinking, thudding, atonal—but often compelling—nonsense on their first album somehow managed to get enough skill to pull together some really great and beautiful music all in about a year. The compositions are great, moody yet compelling and well performed. Sure, there’s still that omnipresent banging piano, but it’s joined with some rather lovely synthesizer, and a lot more restraint in the use of horns and things. The tick-tock drum machine percussion that runs through some parts does get wearying, but not as wearying as the vocals. The Residents are still in their “let’s all sing in silly voices” phase, which is going to last until Duck Stab!, but here it’s cranked up to eleven. There’s a tie between the Porcupine and the Catbird for most annoying voice, and the only reason the Catbird doesn’t win is that it doesn’t get nearly as much stage time as the Porcupine. Look, this will all make (some) sense once you listen to the record. Promise.

Rev. Syung Myung Me: This was, according to lore, the second Residents album recorded, although it’s tough to say whether or not that’s actually the case. The story is that The Residents recorded it, intending it to be only released when they had forgotten about it, allowing them to operate under the Theory Of Obscurity, which says that the only pure art is that which is made with no considerations for the audience in mind. Since they never intended to release it (at least releasing it while they remembered what was on it, anyway), they could record it for themselves.

As for the album itself—it’s often listed as Residents-fans’ favorite album, but I’ve never been able to get into it. I can appreciate it, but most times I go to listen to it, it’s to attempt to see if I can “get” the album, or at least why it’s so beloved.  Oddly enough, I tend to like the stuff done with it (like on Our Finest Flowers or the live version of “Ship’s A’Goin’ Down” on 13th Anniversary Tour: Live in Tokyo) more than the album itself.  I love the idea, and I just really, really want to like it more than I do.  I like parts (like how the “chorus” sections on “The Making of a Soul” coupled with Duck Stab are kind of the blueprint for Les Claypool’s vocal delivery), but as a whole, for whatever reason, it just doesn’t quite jell for me.

It should also be noted that apparently the most recent edition of Not Available adds about seven more minutes to it.  I’ve not heard this version (and, as far as I know, everyone here is reviewing the original).  Perhaps the new version will make me fall in love with the album the way everyone else seems to.

Aila: Not Available is the second Residents album and it’s also the second that I had not heard until just before reviewing it. If The Residents Project were some kind of space mission, Matt, Richard, and now Maddie would be astronauts/cosmonauts, while I would be a “spaceflight participant.” Basically clueless and with no business going into space, but nevertheless enthusiastic. Only without the money of someone who has bought their way into space, but that’s besides the point.

This album is markedly different from Meet The Residents in a few ways. First, it seems to basically be a long suite of music. A musical play, or a concept album of sorts. Only I can’t really decipher what it’s about. But I enjoy the mentions of porcupines, spotting rot, and ships going down in any case. All five tracks (with the exception of the epilogue) are fairly long, and not really “songs” per se, so it’s difficult to pick out anything as a highlight, although I do feel it gets better as it moves along, and the first part of “Never Known Questions” is probably the part that seems to have stuck with me the most immediately. Musically, this is honestly a step up from than the first album. The music is actually quite beautiful and engaging in places, and would be enjoyable even without the added layer of Residents weirdness. On the other hand, the eccentricity of The Residents is probably the most appealing thing about them. So in a way, this album seems to have taken a bit of a compromise in curtailing that to produce a more coherent piece of music. Lyrically it’s still pretty out there – like I said, I have no idea what this is supposed to be about, even though I’ve looked at the lyrics. I suppose that is one of the overarching themes of the band though, being enigmatic. They have of course long maintained the anonymity of the band members, although it’s not exactly hard to figure out who they are (which shouldn’t really matter anyway). Although this seems to be a somewhat conventional, if strange concept album, it’s approached from an oblique angle that is entirely consistent with their overall work.

It’s very hard for me to evaluate how much I like this record in comparison to other Residents albums, since I’ve heard so few of them. As a new experience, I definitely enjoyed it, but I think in some ways I preferred the bite-size Residents doses of Meet The Residents. Likewise, I think I also preferred some of the few things I’ve heard from later on. Of course, since most of the other tracks I have heard were part of a best-of (Louisiana’s Lick – the one Residents cd I actually own) they lack context, which is certainly important for an album. So while Not Available is another very good and interesting record that I’m glad I finally got a chance to listen to, I anticipate better things to come. At the rate of once a week, probably.