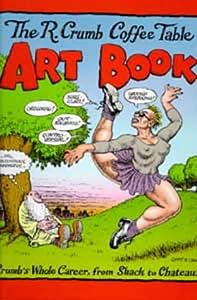 I used to always say that I’m probably the only person who’s a much bigger fan of R. Crumb‘s music than his comics. For what it’s worth, that’s probably still true — I love the Cheap Suit Serenaders — but I’m beginning to come around more on his comics. Kitchen Sink Press‘ The R. Crumb Coffee Table Art Book is a giant volume of essays by R. Crumb, reprinted comics and sketchbook pages — and a lot of the comics are from other periods than his late-’60s/early ’70s heyday — the stuff pretty much everyone thinks of when they think of Crumb. The stuff where he was influenced most by LSD.

As it turns out THAT’S the stuff that tends to leave me cold. A lot of it just seems transgressive for transgression’s sake and/or nonsensical but in a way that makes you wonder if it’s intended to make sense. The draftsmanship is always good with that stuff — honestly, Crumb’s a phenomenal artist and that shouldn’t be news to anyone — so there’s at least something there to keep interest — and probably the reason why, despite not really liking this stuff (what I thought was most of Crumb’s oeuvre growing up), I kept feeling drawn to it to try to Get It.

Luckily, honestly — that stuff was just a relatively short period of Crumb’s life — and his other stuff, before and after, is so much better. I love Crumb’s autobiographical comics and his more serious work — though I also really liked the story from Zap where he re-drew one of the funny animal comics he wrote with his brother as a child. That’s the stuff I find interesting — the looks into Crumb’s mind and self without the drugs in the way blocking the view.

The essays are also enlightening. Crumb talks about his life, what he was going through when he was making the Zap-era comics, and answers some of his critics. My favorite essay was about the racism in his comics — while that is an aspect of Crumb’s work that I really don’t like, I can respect him when he says that it’s because that, while he doesn’t consider himself racist — and realizes that the racial stereotypes in his work ARE awful — it’s a part of his consciousness, and he doesn’t want to censor himself — be it with the weird sexual stuff he’s known for, or the weird racist stuff. It’s all weird and suppressed in the everyday life — and in the case of the racism, not even believed — so it’s all fair game for comics. Of course — the question is whether or not some stuff SHOULD be self-censored, and, well, honestly, I’d come down on the side of “Yeah, probably”… but it’s good that Crumb makes you THINK about that kind of stuff.

I enjoyed this volume much more than the similar (and much smaller) volume The R. Crumb Handbook. Both contain essays and art from different periods, though it seems that the Handbook was a bit more focused on the stuff that doesn’t click. Of course, I still recommend picking up the Handbook for this simple reason: It contains a full-length CD of rare Serenaders stuff, including the Dr. Demento favorite “My Girl’s Pussy“. About a cat. Honestly.

Luckily, I’ve found the Coffee Table Art Book on bookstore remainder tables — so it often ends up being cheaper than the Handbook. That makes it a bit easier to pick up both which I recommend; you get the Art Book as a great insight into the man along with a best-of with his art… and then you get an awesome CD with a really, really thick book of liner notes.