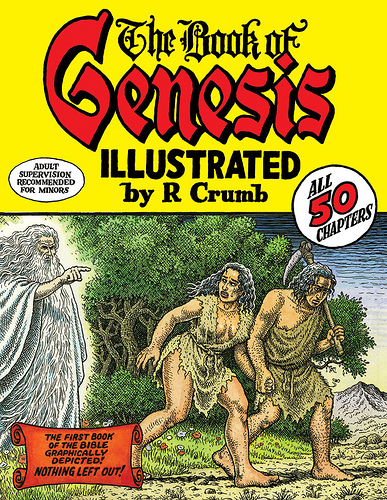 I’d never thought there’d be a time where I’d find myself reading the Bible before bed, but for a week or so, I did indeed.  The catch — the edition was R. Crumb’s Book of Genesis Illustrated, a comic version of the first book of the Old Testament.  This isn’t as big a catch as you might expect, though.  It’s the complete book (including, as the back proclaims, all the begats) with Robert Alter’s translation as the main source (though Crumb also uses a few other sources for the text as well) — and the artwork is straight — it’s not a parody or lampoon of any sort.

Crumb’s art is, as always, exquisite, and makes the narrative clear.  Crumb even smooths out the parts that contradict each other — not by editing the text, but through interpreting them with his images.  The best example is one of the biggest and clearest examples — the first couple chapters of Genesis, which seem to offer two separate creation stories; in Crumb’s, while if one knows the contradiction beforehand, it’s easy to see — but if you just read his version, the story flows and it works; it feels like different parts of the same story, rather than two different ones.

The pictures help bring along the other stories too — sometimes the prose of the Bible can get a little redundant or esoteric (seeing as it IS thousands of years old, there’re references people just don’t get anymore).  The panels help clear that up — and Crumb’s also included a few pages at the end of the volume of his notes, not to mention parenthetical asides in the main text where a simple definition or translation from the Hebrew suffices.  The book is a definite work of scholarship and belongs on everyone’s shelf.  It’s an accessible version of one of the most important books in history — but one that doesn’t sugarcoat or dumb down the content.

In a perfect world, Crumb would continue and do all the books of the Bible, Old and New Testaments.  That said — I remember reading an interview where Crumb said this was it as he wasn’t happy with what he saw as the inverse ration between the amount of work he put into it and the amount of notice it’s received.  I hope that he reconsiders — this is a masterwork, and I’d love to see it continue.  If there was any doubt that R. Crumb is a phenomenal and important artist, this puts the kibosh on that but quick.