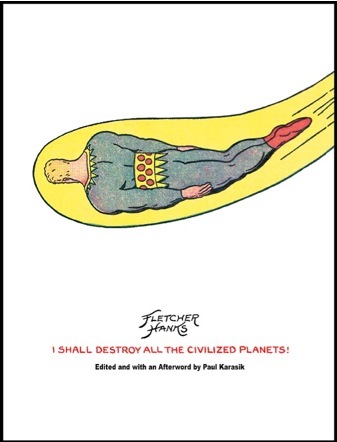 Fletcher Hanks had a very short run in comics; he worked only from 1939 to 1941. In fact, this, the first volume of his comics, I Shall Destroy All The Civilized Planets!, combined with the companion volume, You Shall Die By Your Own Evil Creation!, contains everything ever published by Hanks.  Though his run may have been brief, he worked with Will Eisner’s studio.  Will Eisner, though, didn’t remember much about him — just that he did everything alone, but turned everything in on time.  Granted, with the amount of work they were doing in that time to get complete comics packages out to various publishers and distributors, speed and timeliness was the most important thing, rather than quality.  Formula was king, just because it allowed creators to churn out stories quickly — though, unlike Hanks, most creators specialized in one or two parts of the process and passed the stories on — getting multiple viewpoints in the creation.  Hanks’ stories are all the product of his own mind and hand.

Hanks wasn’t the only creator to work alone on every step of the story — Harvey Kurtzman is one of the biggies in this realm, known for even doing full layouts for the stories he didn’t illustrate himself.  Hanks, however, wasn’t as, I suppose, what you’d consider classically “good”; some have considered him an Outsider Artist, but he was trained and worked in the heart of the industry — he wasn’t just a lone nut in the woods making comics for nobody.  I think a better comparison is Harry Stephen Keeler — a prolific author who was equally idiosyncratic, with his own weird quirks; not a person who became a big name in his field, but someone who inadvertently cultivated a cult following after his death.

His art style is very odd — he’s an accomplished artist, and typically knows his anatomy, but his heads and faces are typically weird looking.  His heroes typically have massive foreheads, while enemies are grotesque, but not in a gimmicky way like Dick Tracy heroes.   He figured out quickly what reproduced well given the cheap printing of comics, and some of his panels, when compared to more established titles — including Superman, actually come out on top when it turns to technique in terms of the medium of comics.  You Shall Die By Your Own Evil Creation! includes examples of his early art, and a lot of his stuff is actually very good and pleasing to the eye.  It’s clear that Hanks’ style isn’t out of incompetence, but of stylistic choice.

Hanks’ major characters are Stardust the Super Wizard and Fantomah, Mystery Woman of the Jungle — though appearances from Big Red McLane and Buzz Crandall of the Space Patrol are included in this collection.  Stardust is a superhero living on a star, who is the most powerful person in the universe with a collection of, to borrow the phrase from The Powerpuff Girls, ultra-super powers – meaning his powers are that he can do magically whatever happens to be needed.  (Sort of like Blossom’s super power of knowing where to find giant jars.)  He’s devoted to “racket-busting”; though most of the villains are psychotic to the point where even the Joker would say “Man, that’s a bit much.”  It’s not uncommon for the bad guys in Stardust stories to kill anywhere from 2,000 people up to an attempt on the entire world’s population — and Stardust doesn’t stop many of the smaller amounts of murders (anything under 5,000 seems to be small potatoes), but stops them before anyone important can be killed… or at least before we start talking about megadeaths.  His preferred method often involves making people hover motionlessly in the air, either to protect victims or to terrify wrong-doers.

Fantomah, on the other hand, deals with smaller causes — her purvey is the jungle, and she doesn’t go far outside of that — meaning typically that, in her stories, only hundreds of people die.  Oddly enough, Hanks seems more concerned with the animals — they’re not usually spared casualties either, but it seems that Fantomah’s often more concerned with saving the animals than she really is the human denizens of the jungle.  Like Stardust, she can fly (though sometimes she’s just a head — which isn’t ever really explained), and also likes to suspend folks in midair.  Both Fantomah and Stardust have also magically turned a group of thugs into one man, and punished that one man (who, in his dialogue, doesn’t seem particularly confused by his new, singular form).  I guess only having to punish one guy instead of hundreds saves time.

The book ends with a comic by the editor, Paul Karasik where he attempts to find out information about the elusive Hanks.  Karasik finds his son, Fletcher Hanks, Jr. — and it’s rather sad.  It turns out that, as human beings go, Hanks, Sr. was a piece of shit.  He was an abusive drunk who, ten years prior to his comic career, stole all the money from his son and wife and ran off — though, that might have been the best thing he’d done for them.  He kicked Hanks Jr. halfway down a flight of stairs with one kick — when Hanks Jr. was FOUR.  He also punched his wife so hard in the face he broke bones — then refused to take her to the doctor, allowing the bones to knit together however they happened to be, rather than having them set correctly.  It’s a bit of a downer to end the book on, but it’s better to know the truth about Hanks — and by putting it at the end, it doesn’t color his work when you’re reading it for the first time — just like how Hanks’ readers for the past 80 years haven’t known that these comics were drawn by a man so awful his own children fantasized about one day killing him to stop the abuse.