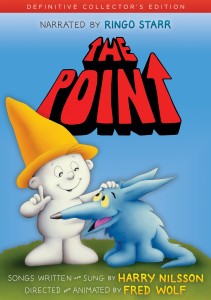 The album version of The Point, Harry Nilsson‘s children’s fable, was an integral part of my childhood. I have many fond memories of listening to that record with my dad, thrilling to the story of Oblio, born pointless in a world where everything is pointed, and his adventures in the Pointless Forest. But I did not see the film version until I was older, and that one time was quite awhile ago. So it was with fresh eyes that I watched the new “Definitive Collector’s Edition” DVD, but I am very happy to report it lived up to all my expectations.

The Point is a wonderful confection consisting of Nilsson’s unforgettable songs, simple and eye-catching animation, a captivating story, and a moral lesson that manages to not be preachy. Narrated by Ringo Starr and animated entirely by a man named Fred Wolf, everything about it is delightful. But the film really hinges on Nilsson’s beautiful songs, and everything else is carried along by them.

The film tells the story of a very different little boy, something I think all children can relate to in one way or another. Without talking down to them or hitting them over the head with it, The Point deals with this idea in a sensitive way, something all children’s entertainment could learn a lesson from.

And The Point is one of those rare entertainments aimed at children that can be enjoyed just as fully by adults. It doesn’t try to sneak anything in that would go over a child’s head, but the songs, animation, and story are so compelling that it is a wonderful viewing experience no matter how old you are.

A half hour of bonus features round out the DVD, providing some interesting backstory on the making of the movie. The one thing that comes through most clearly in the interviews with Fred Wolf, other people involved in the production, and Nilsson associates is how dearly beloved Harry Nilsson and this project are by everyone involved. I think The Point has to a certain extent fallen through the cracks in the forty-two years since it was released, and I hope this relase will introduce it to a new, well-deserved audience. Though it certainly bears the mark of the time in which it was made, its lessons are timeless.