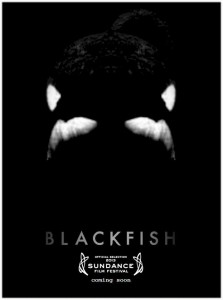 I remember visiting SeaWorld as a kid. I grew up only a few hours north of San Diego, so that’s the park where we would go. SeaWorld was never quite as much fun as a trip to DisneyLand or Knotts Berry Farm or Magic Mountain or even the San Diego Zoo or Wild Animal Park. But it was always a big event. And the entire trip would always center on the orca show – usually ending with a big fight over whether we would be allowed to sit in the splash zone or not (I believe that the kids only won this battle once). The last time I went to SeaWorld in San Diego, I was probably around ten to twelve years old.

I have a lot of disconnected memories of SeaWorld – tide pools where you could pet fish, creepy eels poking out of reefs, sea otters maybe… the main memory I have of the orca shows was not being able to stop being freaked out at the thought of swimming in that tank with that whale. Seeing a whale dive through the water and a person in a wet suit dive off of the whale’s nose did not just leave me awe-struck. I was preoccupied with how fucking frightening it must be for the person doing it.

But while it did bother me in that kind of vague way that seeing any wild animal in a zoo or circus has always made me feel just a bit off – I never questioned SeaWorld’s right to keep the orcas there and to train them to perform.

After seeing Gabriela Cowperthwaite’s documentary Blackfish, I do not feel guilt or regret about my own participation in SeaWorld. I don’t feel anger toward my parents for taking me to SeaWorld. I don’t feel any guilt over memories of my mom’s white Astro van that we named ‘Shamu’. I think that it is important to point out that while the documentary clearly takes the view that the orcas held not only by SeaWorld, but in marine parks worldwide, are treated less than humanely, this is not a frothing indictment setting out to vilify anyone in particular.

While, yes, it does establish that the ‘party line’ from SeaWorld is usually disinformation and evasion, it does not point to any single individual and I think this is important. There is not one big-wig money man holding the keys to the kingdom and laughing evilly to himself because he’s gotten his jollies by making these whales lives awful. We are all of us complicit in their exploitation and this documentary seeks above all to educate the audience about how the whales were obtained (horrifically), how they have been kept, and how the people who train them have been kept out of the loop in many important aspects of their care and training. Not least of which is the lack of information given to the trainers about past ‘accidents’ and attacks by the animals.

The main focus of the film, the narrative that ties the documentary together, is the story of Tilimuk, a 30-ish year old bull orca who was captured in the wild when he was about two years old and who has been directly involved in the deaths of at least three humans. It’s a heartbreaking film to watch and it’s a difficult subject to explore. I believe that this film is wonderfully constructed and I have a huge admiration for Gabriela Cowperthwaite. I was fortunate to attend a screening where she was present afterwords to conduct a Q&A session. She does not come from an animal rights activism background – rather, she is a mother and she took her kids to SeaWorld and could never quite articulate what about the experience bothered her – when Tilimuk was involved in the death of one of SeaWorld’s top trainers in 2010, she began to form the idea of making a documentary. Particularly after reading Tim Zimmerman’s excellent article The Killer in the Pool (I highly recommend reading it, it makes a good supplement for the documentary), and Zimmerman I believe was a producer on the documentary.

The film should be released this summer, I believe August was mentioned. This is a very important film for you to see and I urge you to check it out and judge for yourself. Cowperthwaite mentioned that at the Sundance screening that there were people asking a lot of questions that made it clear that they were SeaWorld legal team members on the DL. They were asking things like ‘What, you think we should just release the whales into the wild?’ and of course not – the orcas that SeaWorld keeps in a life of 365-days-a-year entertainment slavery would not survive in the wild. I do feel strongly that they should not be made to perform every day and I believe that it’s awful that SeaWorld has built such a huge moneymaking machine at the expense of these amazing animals leading the lives that nature intended for them. Retire them to an ocean cove sanctuary. Replace it with educational exhibits. Stop pretending that SeaWorld is anything more than a glorified circus act designed to make money.

I know that my own childhood instincts were right – that’s fucking dangerous what they do. I always think back to the wildcat rescue team that I saw last fall presenting their ‘ambassador cats’: a cheetah, a mountain lion, a baby ocelot, and a Siberian lynx. The handler said to us ‘You may think that you’ve just seen friendly cats up here – purring and rubbing against me. But that’s not what you’ve seen. You’ve just seen some terrified wild animals and I am the only thing up here that they have of their territory. I never forget that – they have their routine and if I break that, even for a second, then they could and probably will attack me and I’d deserve it because these are wild animals’. And you don’t fuck around with that.