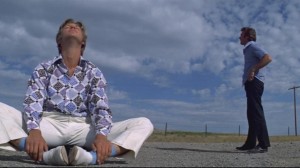 I learned that the movie Thunderbolt and Lightfoot existed in May of 2010. I was in Santa Fe, New Mexico visiting some friends and we had gone to a local video rental store and each of us chose a movie to rent. I was careful to choose a movie that was not available at the time on DVD or Netflix (it now is). I chose a Jeff Bridges movie called Against All Odds (if you don’t know the movie, I know you know the Phil Collins theme song which is called “Against All Odds” but it’s the “Take a look at me now” song). I was looking at Jeff Bridges’ other movies on the IMDB app on my iPhone when the title jumped out at me and I made a note to see if I could find the movie.

It took me a little over two years after that before I was finally able to see Thunderbolt and Lightfoot. If I’d been passionate about seeing it, I could have hunted down a copy sooner, but I didn’t know then how much I would love the movie. I had almost forgotten about it when I saw that it was scheduled to screen at the Pacific Film Archive in Berkeley in July of 2012. I was extremely excited and so I was disappointed when I realized that the movie was set to screen on the day that I was supposed to go backpacking in Yosemite with my dad. I resigned myself to it, taking comfort in knowing that there was a print out there getting theatrical play and knowing that if I really wanted to, I could hunt down and buy a copy of the movie. Then my father’s secretary passed away and, in order to attend her memorial, he called to ask if we could push the backpacking trip back by one day. Of course I told him that was fine and, though I am very sad about her passing, I was glad to take the opportunity to see the movie.

I still have my ticket stub from that fateful trip. From the moment the movie started, I had a feeling that it was important. I’ve had this feeling before and it’s never been wrong. I loved the hell out of the movie and was so glad to have been able to see it. But I was quickly distracted by backpacking and getting an interview for the job that I have since gotten and I didn’t think much more about the movie until it screened at the Castro Theatre in San Francisco a few months later as half of a Jeff Bridges double feature with The Big Lebowski. I was able to see it a second time from a 35mm print and it was even better seeing it the second time.

The official DVD release in North America has long since gone out of print, and copies on Amazon can go from around $20 to around $90. I was able to find a bootlegged copy for sale on ioffer.com (sometimes a good source for such things) which I bought and received and was refunded for – I have no idea why, the Paypal message said something about the product not being new. I’m not going to complain about free movies though. I now own this movie on DVD and the DVD includes the theatrical trailer. I would love to see this movie released (preferably on BluRay) with a ton of special features – commentaries and making-of documentaries and retrospectives in which Eastwood and Bridges would chat about the movie and how much fun it was to make. Assuming of course that it was actually fun to make.

So why should you see this movie? What’s so special about it? What makes it worthy of your time?

It’s a difficult movie to describe. It’s a bit of a road movie, it’s a bit of a crime thriller, it’s a very 70s movie, but at its heart is the story of men being friends. The film opens with Eastwood preaching in a church as a man with a gun arrives and chases him out of the church. At the same time, Bridges is shown approaching a used car lot, where he cons the salesman and drives off in a flashy car. Eastwood literally runs into Bridges in his escape from the man with the gun, whom Bridges hits with the car. Eastwood crawls into the car despite Bridges attempts to throw him off. At first, Bridges — Lightfoot — is bothered by this preacher joining him. After driving a while together, though, Lightfoot is sad to see the preacher leave. He insists that they make a good pair and were beginning to become friends. Through a twist of plot and without much time for reflection, Eastwood — Thunderbolt — rejoins Lightfoot in his car and they continue together.

As the movie progresses, the men bond over a mutual interest in petty cons and Lightfoot’s interest in Thunderbolt’s history as a successful criminal. They eventually are joined by two more con men and begin to plan a large, dangerous, and complex heist. The process of preparing for a heist is not an uncommon sight in this kind of movie, but the preparations and the execution done in Thunderbolt and Lightfoot are unlike any other movie I’ve seen. And at the heart of it all is this bizarre, yet utterly believable and charming, bond between the two men.

I know there is speculation of a queer reading of the friendship between the two men –and the canon of the film does little to discourage it (though they are clearly established as heterosexual and each have encounters with women in the film). But I really believe that it’s rare to see a movie that treats male friendship so well – it doesn’t take much and Lightfoot and John (Thunderbolt) are friends — they absolutely trust each other and have each other’s backs; one of my favorite moments in the movie shows John buying them ice cream cones after they receive some bad news. There is no need for a heterosexual romantic storyline in the movie — there are actually very few female roles in the film — and no need for a homosexual romantic storyline either. The movie is about a heist but also about the relationships between the men working to pull off that heist. It’s a bromance movie. (All that being said, there is some wonderful gay subtext sprinkled throughout the movie, making it fun to watch on many levels – there’s a 45+ page thread on some Clint Eastwood site all about the subject – it’s called “Gay or No Way?”)

The movie has a lot going for it – it has Clint Eastwood and Jeff Bridges in the heydays of their respective careers. Aside from Jeff Bridges unfortunate choice of pants throughout the movie, both guys look super foxy (Clint Eastwood especially – through most of the movie he’s wearing a very flattering checkered shirt and when he removes it in favor of a white undershirt… YUM). Gary Busey has a small role that’s fun to see – that’s some SUPER young Busey (his name is spelled ‘Garey’ in the credits). Jeff Bridges looks awesome in 70s drag. George Kennedy has a great supporting role that gets better with each repeat viewing. There are surreal moments (a trunkful of white rabbits), funny moments, touching moments, plenty of excitement and thrills, and the ending is moving and well done. There is minimal music used in the movie, with the theme song “Where Do I Go From Here” written and sung by Paul Williams (who wrote “The Rainbow Connection” for The Muppet Movie and played Swan in Phantom of the Paradise, he’s a fucking legend).

This is a perfect movie. It’s hard to say without the benefit of more time, but this is a movie that I could easily see becoming a very very top favorite of mine. The night that I got the DVD, I watched the movie twice in a row and would have watched it more if I’d had the time.

I highly recommend tracking down a copy and making it a part of your life.