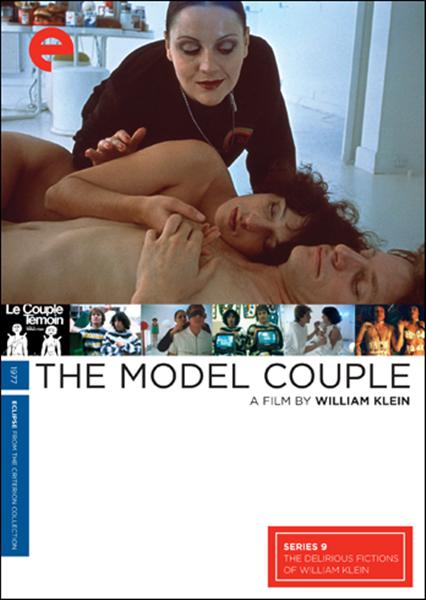 Le couple témoin, or, in English, The Model Couple, is, unfortunately, William Klein‘s last fiction film to date.  Like Who Are You, Polly Maggoo and Mister Freedom, it’s available in the great Eclipse DVD set The Delirious Fictions of William Klein.  It’s a satire, as the other two films are, although it’s neither as straightforward as Maggoo, nor as over-the-top as Mister Freedom (though, of course, what else could be so?) — but somewhere in the middle.  The Model Couple feels a little bit like science-fiction, but not in terms of space and lasers; rather, it’s social-science fiction.  The titular couple are analyzed and processed and placed in an apartment where everything is labelled (including a wall, helpfully labelled “wall” and a lamp that is the word “lamp” in neon) or lettered for proper, exact data collection.  While the man, Jean-Michel spends 8 hours a day at “work”, testing various consumer products, the woman, Claudine keeps house with state of the art devices (that the couple was not given outright, but given a discount on).

What ends up happening is that Jean-Michel and Claudine become a perfect focus group, constantly monitored for their choices and preferences.  The client isn’t a multinational corporation, though, but the Ministry of the Future, a French governmental organization set to design the City of the Future.  The tests are for not only what products should be provided — or rather sold — to the populace, but also to determine what restraints can be set before people start to lose happiness — like whether or not they could lower the ceilings by eight inches without people complaining; so, the couple are put through all sorts of various mental tests as well of dubious merit.  How many of the tests are for research and how many are to amuse the researchers is never clear.

Like in Albert Brooks‘ film Real Life, a reality show of sorts is made; feeds are aired, experiments are discussed and dissected on live TV by a panel of experts, and people are allowed to tour and ask overly familiar questions of the stars as if they know them.  Of course, the purpose is not only to help design the perfect City of the Future but to get citizens used to the idea and envious of living in there with all the decisions made for them for maximum happiness.  The Minister of the Future says during a dinner with the Couple that governments can strive to bring progress or happiness, but not both — and it sounds like his department’s thrown its lot in with the latter.  After all, as DEVO said, freedom of choice is what you got, freedom from choice is what you want.

As is Klein’s nature, the film does peter out a bit at the end; it ends with a youth rebellion that doesn’t quite seem to make a whole heck of a lot of sense, but, again, as is Klein’s nature, it’s still enjoyable to watch and beautifully shot.  His background as a fashion photographer (or, somewhat of an anti-fashion photographer with his ironic approaches) for Vogue is clear and infuses every shot; the composition is always outstanding and just grabs the eye and doesn’t let go.  Of the three films in the Eclipse set, it’s probably my favorite — both Polly Maggoo and Mister Freedom have their duller stretches, even though Maggoo‘s story is the most coherent.  It’s got a more universal theme than Maggoo, but it isn’t as exhausting as Freedom.  Still — though none of the films are perfect, they’re much better than most non-perfect things out there.  And even if they don’t necessarily gell as films, at least the mix is almost there.  I don’t know if Klein’s one of my favorite directors, but he’s definitely one I want to see more of — and hope he gets back into film soon; his last was in 1999, and that’s too long.