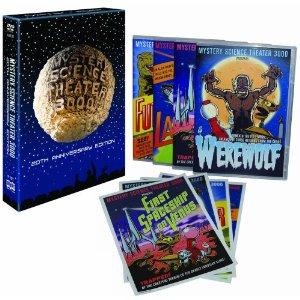 It’s kind of amazing that Mystery Science Theater 3000 has been around for over 20 years, and even the earliest episodes still hold up.  I guess the act of making fun of bad movies never really gets old.  It sure doesn’t for the MST3K crew; they’ve got a couple ventures going today — Joel Hodgson, Trace Beaulieu, TV’s Frank Conniff, Mary Jo Pehl and J. Elvis Weinstein doing Cinematic Titanic, and Mike Nelson, Kevin Murphy and Bill Corbett’s Rifftrax (and, earlier, The Film Crew).  Both of these are great, but there’s nothing like the original.

The 20th Anniversary Edition also marks MST3K‘s move from Rhino Home Video to Shout! Factory — and it’s definitely a move up.  This isn’t to knock the Rhino releases; they were all quite good — but the Shout! releases are beautiful.  The exclusive artwork for the cover art of the individual DVDs is great — but it’s the actual content that really shines.  Shout! has done some level of remastering — I don’t know how much, but these look better than they ever have — including when the episodes aired.  One other bonus — they’ve fixed the audio levels.  In some episodes, the riffing was MUCH louder than the actual film dialogue — meaning that to hear both, you’d have to crank the volume. Admittedly, if you have to go deaf, going deaf by Crow yelling at you isn’t bad, but still.  Now, though, you can have the film at a normal volume and hear both perfectly.

The shocking thing — even the ORIGINAL FILMS look great.  On one hand, I wonder if Shout! actually re-greenscreened the Shadowrama over a new, better print.  It seems like a thing that’d be more effort than it’d be worth monetarily, but damned if it doesn’t look great.  Either way — whatever they did, it’s well-appreciated from this fan.

Perhaps even more shocking than that — there’s actual KTMA footage on the bonus features and even that looks outstanding!  I don’t know how they did that either; it’s footage from a small UHF station from 20 years ago — I wouldn’t even expect the original masters to look as good as they do on this DVD.  Shout!’s mastering department must be the best in the business.

The rest of the bonus features are great, too — there’s a feature-length documentary on the history of MST3K, including the aforementioned KTMA clips, and interviews with just about everyone.  It’s a relatively up piece, not really hard-hitting, but even though while it doesn’t go too much into Joel’s reasons for leaving, he DOES make a comment about him feeling that the show was being wrested from his control — which is more than you’d expect from a real puff-piece.  There’s also the footage from the Comic-Con reunion hosted by Patton Oswalt!  And rounding it off — aside from all the original movie trailers — is a great feature editing together all the different versions of the MST3K theme song, including the original from KTMA!  (It’s not all the opening sequences; the Season 1 version is omitted, as though it looked much different, the song was the same as the one from seasons 2-5.)

The movie choice for this one is pretty good, too!  There’s First Spaceship On Venus, a season 2 one featuring Crow and Servo’s robot that communicates only in foam, Laserblast, the final episode of the Comedy Central era, Werewolf, a 9th season one featuring Joe Estevez and a weirdly international-sounding cast, despite taking place in Flagstaff, AZ including a woman who pronounces the titular character as it is spelled — mainly “were wolf”, and, finally, season 10’s Future War, the most recently made film that MST3K ever riffed.  All are great episodes — and with this and the other sets, Shout! is showing itself devoted to putting out both the obscure episodes (Mad Monster and Robot Vs. Aztec Mummy from Season 1) as well as the fan favorites and important ones (Laserblast, Soul Taker, FInal Justice and The Final Sacrifice – ROWSDOWER!).  I hope the relationship with Shout! lasts a long time.  They’re definitely the DVD label of choice for doing TV right — and they seem to have pretty good taste in what they put out — Freaks & Geeks, SCTV and MST3K all seem like they’d belong at the same home, and now they do. Shout! Factory — though, if you guessed “my house”, you’d be right too.