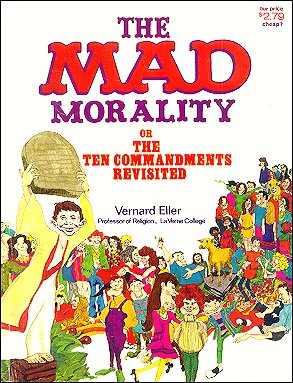 The MAD Morality is an odd duck amongst the world of MAD paperbacks. Originally published by the Christian-based Abingdon Press in 1970 and receiving a second paperback edition by Signet in 1972, it’s remembered more as an oddity amongst both MAD and Christian circles than as a serious piece of work. The MAD Morality began life as an essay in The Christian Century, where it received a fair amount of praise for its clever writing and biblical foundations. He later contacted the editors of MAD to ask permission to use their material in a book-length version of the aforementioned essay, where (according to MAD historians) the editors were so amused by the concept that they agreed.

The MAD Morality, on its surface, attempts to state that MAD has a firm Biblical morality deep within its satirical outercoat. Eller goes through each of the ten commandments and, using previously published MAD material, shows the readers how MAD uses satire and comedy to get very moralistic lessons into the heads of its readers. Some of the examples are fairly obvious, such as showing some typical Dave Berg “Lighter Side” comics to showcase how MAD tells readers to Honor Their Father And Mother. In the You Shall Not Commit Adultery section, a comic parodying Dr. Seuss showing two Grinch-like creatures cheating on each other is used. Eller easily makes his point that MAD “sneakily” teaches youth simple moral lessons that have a firm basis in Old Testament Biblical foundations.

The trick of the book, though, is that while it states that it has no other purpose other than to exonerate MAD in the eyes of fretting Christian parents worried about the moral fiber of their children, it actually has an ulterior motive: Teaching a modernistic take of the Ten Commandments. The original “MAD Morality” essay shared an anecdote about how when Eller pointed out to a group of teens that the lessons being taught by MAD articles were simply the same thing being taught in their Sunday school classes, they brought up an interesting point: While Sunday school and other Biblical classes tell you WHAT to think, MAD shows you THE TRUTH and lets you draw your own conclusions. Eller proposes that this sort of teaching, in which those wishing to teach Biblical principles “Show, Not Tell” through a modern style of parables-through-satire, is better suited for spreading the basics of Biblical teachings in an environment of social rebellion amongst youths.

The late 60s/early 70s saw a rise in “Jesus People”, or a more social-justice oriented side of Christianity. An offshoot of hippies, “Jesus People” took the progressive leanings of the hippie movement and applied them through the lenses of New Testament teachings. Taking the social justice morality that matched with that espoused through Jesus Christ by the horns while skipping the sexual freedom and drugs saturating the movement, “Jesus People” took to preaching and bringing the younger generation to Christ. Communes and turning to early Christian lifestyles became in vogue amongst the movement, and while these communes have all but disappeared from the modern Christian landscape the social justice motivations have stuck around the more liberal Christian denominations.

It was during the backdrop of the “Jesus People” movement that Eller wrote The MAD Morality, and it shows. The newfound interest in Christianity gave him a good opportunity to make the case for keeping the ten commandments by offering a broader interpretation of their meaning. Using Frank Jacobs and Max Brandel’s incredibly biting piece “America The Beautiful – Revisited”, which features the patriotic hymn through a series of pictures of hate crimes and pollution, Vernard Eller states that “Keep Holy the Sabbath Day” isn’t just about going to church, but keeping good stewardship of the environment. A case is made for “Honor Your Father and Mother” meaning that all people should be respected and loved, while “You Shall Not Make a Graven Image” is shown to mean that public nudity is disrespectful to God. The interpretations are a bit of a grab-bag: While it’s easy to make the case that all cussing is dissallowed by the third commandment, saying that it extends to those doing evil in the name of good is a pretty big stretch, even for those who aren’t traditionalists.

As a piece of obscure MAD history, The MAD Morality is an absolutely fascinating book. It was rare to see MAD being lauded by a Christian scholar as something that HELPED social mores instead of a piece of trash that was slowly eroding them away. Eller does a fantastic job making his point clear, and his examples aren’t just one or two cherry-picked moments that feel out of place in the MAD compendium but works that show exactly how MAD used shark-tooth style satire.

60’s-70’s MAD didn’t just make silly jokes about burping and the ridiculousness of pop culture, but grasped on to the outrages of the time and tore them apart. Whether lambasting the John Birch Society with an eerie prescience or mocking the two-faced nature of using violence during calls for peace, MAD acted as a reflection of the counterculture of the time by skewing any and all hypocrisies the writers and artists saw. One of the greatest, most upsetting pieces I ever saw in MAD, and one that garnered them some of the biggest controversy, was a typographic work of art in which the pledge of allegiance was filled with racial slurs. Written by Al Jaffee, it cut straight to the bone of the hypocrisy of uber-patriotism and exclusion while being a simple piece of work. Its a piece of “shock” humor that actually works, and is something that I think that any comedy writer needs to print out and put on their walls.

The MAD Morality is far tamer with its points, obviously, but it still makes them well. Whether or not you agree with Eller’s re-interpretation of the ten commandments is up to your own personal religious beliefs, of course. As a UU Christian, I am open to re-interpretations of any piece of scripture, and while I strongly disagree with a few of his points regarding sexuality overall I found a very interesting piece of apologetics that seems to have been lost to the tides of time. Anyone interested in either theology or MAD should at least take a look, if only for curiositiy’s sake.

Grace Hartman has been saving MAD paperbacks from the cruel clutches of used bookstores since she was 10, and has amassed a collection of over 20 different books. When not doing terrible, terrible freelance ghostwriting she likes to draw awful pictures and watch cartoons aimed to sell toys to little girls.