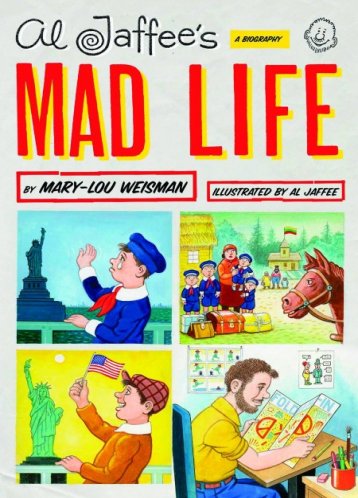 Al Jaffee is one of the most talented cartoonists in the world; not only is he a great artist, but he’s incredibly clever.  After all, he’s the guy who not only invented the Fold-In, but has done over 400 of the things.  He’s also done a lot of hypothetical inventions for MAD magazine… some of which have made it into the real world, with his name on the patent.  He’s 89 years old, and still going strong, despite having an essential tremor in his hand causing him to hold his drawing hand steady with his other hand.

The new biography Al Jaffee’s Mad Life by Mary-Lou Weisman fills in a lot of the background on his life that most people, even hardcore MAD fans, don’t know.  In books like Mark Evanier’s MAD Art and Marie Reidelbach’s Completely MAD, there’re references to his childhood in Lithuania, but not much more.  Mad Life reveals much about his childhood — how his mother took the four Jaffee children away from their father in Savannah, GA to Zarasai twice.  Al’s father saved them the second time just before the Nazis came through Lithuania — where Al’s mother was later killed.

The best thing about Mad Life is not just the tons of new illustrations by Al, but the fact that it is more-or-less a book-length interview.  Al is as interesting as you’d expect, and he’s got a laid-back tone that makes reading him a joy.  In fact, it might be slightly better than actually sitting down with him, since there’s footnotes to define the occasional bits of Yiddish he uses!

There’s also plenty for fans of Harvey Kurtzman too, since he talks about being aware of him at the High School of Music and Art in New York, and being brought aboard for MAD intially and Humbug.  He also reveals that Bill Gaines, publisher of MAD, was trying to get in touch with Kurtzman to publish Humbug during MAD’s off months.  (Unfortunately, Kurtzman’s falling out with Gaines was still in full-force, and he refused to entertain the idea — or even make himself available to anyone from the MAD camp who could relay the message.)  There’s also a few behind-the-scenes bits that Al Jaffee relates including about some of the editorial decisions behind the modern MAD and how he typically doesn’t come up with the ideas for the Fold-Ins anymore (due to a lack of desire to keep up with pop culture).

For anyone who’s a fan of MAD or cartooning in general, Mad Life is a must read.  The bulk of the book is about his childhood — and the various gadgets he and his brother Harry would come up with.  It’s amazing the things they’d come up with and then build and make work.  It’s hard to read this book without your jaw slackened from amazement.  If only the book were longer — say about 1000 pages.