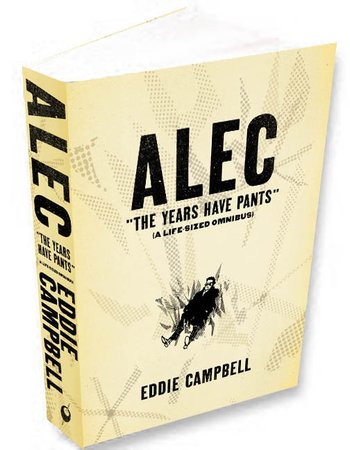 Some people can’t grasp certain concepts. The medium of comics is something that still has a long way to go before being fully understood. Despite the enormous selection and diversity present on bookshelves, in store windows and online, there are still those who have a very close-minded and unfair view of what comics are. Some are merely dismissive of all comics as “kid’s stuff,” while others say anything from it “not being real art” (whatever that means) to it being “utter garbage.” Truthfully, I think there will always be those who just won’t try a comic or a graphic novel out just because of what it is. They’ll literally judge a book by its cover. Hell, they might judge the book without even bothering to look at the cover. If it’s a comic, well, it’s not grown-up enough for them.

It’s a pretty safe bet that such people have never read anything by Eddie Campbell.

Known for such collaborations with Alan Moore as From Hell and A Disease Of Language, Campbell is a prolific and talented writer and artist, and one who certainly has a lot to say. His autobiographical work Alec: The Years Have Pants, collected into a nearly-complete single volume by Top Shelf Productions (ISBN 978-1-60309-025-4; $35), demonstrates that comics can not only be smart and fun at the same time, but they really can be just for adults.

Some might be a little put off by the book’s sheer size –it’s a staggering 638 pages– but those brave enough to give it a try in spite of that will find their bravery rewarded soon enough. The format is that of a daily newspaper comic, but it forms a familiar, ongoing slice-of-life narrative that is nothing like the often random (or, at best, loosely connected) world of the funny pages, while at the same time so closely resembling it. The art style shifts a few times (this is, after all, a compilation with some experimental works thrown in), but on the whole it manages to be simple and detailed at the same time: easy to look at, but full of nuance.

I say it’s a nearly-complete volume because a seventh, full-color work is not inlcuded, being in the hands of another publisher. But what we have here is quite enough. It certainly feels complete, and it includes rare and never-before-seen material, making it worth having even for those who might have the original works stored away in their libraries somewhere. Campbell includes details of where these works have popped up before, or where they might have been had they seen the light of day. It’s certainly Campbell’s magnum opus, and not merely because of its length.

It is often very funny, sometimes touching, sometimes metaphorical and occasionally downirght surreal. It’s brave enough to show us the ugly things. We see people blowing up at each other and behaving badly. We see little moments of triumph, big moments of anger and even bigger moments of humilation. We see crazy, I-can’t-believe-that-just-happened kind of things, like an old lady being given a ride home only to wind up dangling off the side of a truck, or a guy taking just a moment to thoughtlessly urinate into a refrigerator. We see people getting together and people breaking up. And we see a little girl being potty trained and, whether innocently or deliberately, taking her instructions a tad too literally.

This isn’t the sort of book a kid would get into. It’s too long, too mature and actually too down to earth. Kids like fantastic stuff. Well, there are exceptions, certainly, but you wouldn’t want your kid reading this book. Since it presents life starkly and honestly, it presents things kids aren’t ready for. People get drunk. Tempers flare. Sex occurs. And, of course, some of the characters curse. They don’t curse often. But they curse freely.

Campbell presents his work with wit and imagination. He uses different techniques and layouts. He even mimics the art of others, including such big names as Segar and Walt Kelly. The art will sometimes come within range of photo-realism (though it never quite takes that extra step) or sometimes resemble random scribbles or incomplete pencil work that still manages to form a definite image. And what detail is not conveyed in the art is more than adequately expressed in the narrative. It achieves what any good literary work or film achieves: we feel we come to know these people, although in this case, we might wind up knowing a few of them a little too well.

Could a graphic novel challenge a reader? Yes. This has been proven many times before, and Campbell proves it again. A challenge is not something to shy away from. It is something to step up to, face, and take down. Don’t take it as a challenge from me. Challenge yourself, and be rewarded. There is much to appreciate here.