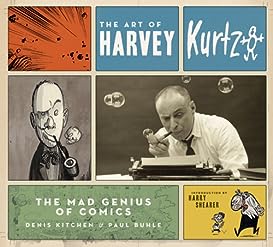 [Purchase Book]
Harvey Kurtzman is one of my comedy heroes — and he’s one of those people who has had a huge influence on our culture; not only did MAD change the culture, but in particular, it was HIS version of MAD that had a huge influence on a lot of cartoonists — not to mention that he discovered Terry Gilliam and gave Gloria Steinem a boost in her career.  This isn’t to say that the Al Feldstein era of MAD had no influence or worth like some folks do — in fact, I think that while the Kurtzman era was a singular vision, the Feldstein era was more consistent — despite being written by many different people.  Of course, Kurtzman invented the damn thing and the whole style used by both eras of MAD, as well as countless knockoffs — and, well, he was incredibly funny.  If Kurtzman had a flaw when it came to his work — and I don’t think he necessarily did — it was that he insisted on doing so much of the work himself from writing, pencilling and editing everything, which he had the talent to do, easily, but that’s a good recipe to burnout.

Oddly enough — with such an interesting, talented person, there’d never really been a biography on Kurtzman — though Denis Kitchen and Paul Buhle’s The Art of Harvey Kurtzman: The Mad Genius of Comics fills that gap pretty well.  It’s not an in-depth biography, but that’s because most of the page count is taken to beautiful reproductions of Kurtzman’s art, including lots of rare stuff, and, well, that’s a trade I’m happy to make.  The art goes through every era of his life, from his early, early days, to the E.C. comics era, through his various satire magazines and finally the Little Annie Fanny strips he did for Playboy with longtime friend and collaborator Will Elder.  The covers to all of Kurtzman’s satire work, from MAD to Trump, Humbug and Help!, are included, along with analysis and, where needed, an explanation of the reference the cover’s based on.  This is a great companion to Fantagraphics’ recent collection of Humbug and the (hopefully forthcoming?) collection of both Trump issues put out by either Dark Horse or Playboy (it’s been attached to both — Playboy does own the material).  If only the Help! issues will get the proper reissue treatment, we’ll be able to see the full selection of Kurtzman’s magazines.

One of the real treasures in this book — well, aside from the rest of it, that is — is the look at Kurtzman’s legendarily in-depth scripting process with a full-color vellum insert of each stage of a Little Annie Fanny splash page, from thumbnail, through to color overlay, other drafts, all the way up to Will Elder’s final, beautiful painting.  Some artists found Kurtzman’s level of detail constricting, but Elder worked very well with it, elevating both artists to a level of brilliance I might say that neither could reach individually… but both could come equally close to it.

If the vellum insert wasn’t enough of a tip-off, the book is beautifully put together — the publisher, Abrams Comicarts didn’t spare any expense on a handsome tribute to an amazing cartoonist.  While the Comics Journal Library #7 book on him is a great resource, The Art of Harvey Kurtzman is much more readable in one sitting but also acts as a great browsing book.  Harvey Kurtzman is a person everyone should be familiar with — and if you’re not, this book does a great service at explaining and then illustrating exactly why.