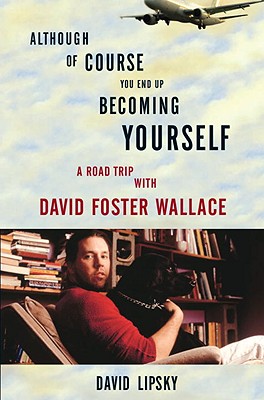 In 2010, there’re a couple of David Foster Wallace biographies due — I’m not sure when the other one is coming out, but David Lipsky‘s Although Of Course You End Up Becoming Yourself is the first one to be released, though, really, it’s not actually a biography.  It’s a book-length interview conducted at the end of the Infinite Jest promotional tour.  David Lipsky was hired by Rolling Stone to do an article on Wallace (or, perhaps more accurately, the hype around Infinite Jest) and so they sent him out to spend five days with the author.  Unfortunately, the article ended up being spiked, but Lipsky kept all the tapes — and this is the result.


As Wallace is one of my favorite authors, I welcome anything more from him — his suicide in 2008 was an absolute tragedy, that someone so talented had to have such a short life; in a way, the interview format is better than a straight biography, in that there’s more of his actual voice.  Of course, as it’s extemporaneous, it’s not as dense and as well-crafted as his work — but it’s clear that Wallace isn’t a put-on; he still has a simlar voice, albeit with much less in the way of digressions and 2 dollar words.
The book picks up steam as Wallace becomes more comfortable with Lipsky after they’ve spent a couple days together.  At that point it becomes a bit more like they’re just having a conversation rather than an actual interview — though Wallace is always aware that it is for an article, and makes reference to the future piece and parts that he hopes will have the proper context, rather than just dropping a quote in that might sound strange divorced from the surrounding information.
The other great thing about when the book hits this point is that Lipsky’s parenthetical comments tend to fall down in number.  The early chapters are filled with loads of, quite frankly, irritating notes of Lipsky trying to second-guess Wallace’s motivations for saying particular things.  Lipsky’s favorite descriptor seems to be that Wallace was “flirting” with the interviewer, presumably in Lipsky’s eyes to make it so that he, i.e. Lipsky, will be more inclined to write his article more favorably.  I admit part of my objection is that it tarnishes my mind’s-eye of David Foster Wallace as Pure and basically on the up-and-up and not nearly as manipulative as Lipsky seems to make him out to be.  But most of my objection involves invoking the Dan Le Sac rule:  Some people are just nice.

While the book definitely suffers from Lipsky’s desire to shove himself into the narrative by making comments after the fact (and that his introduction has a vaguely snotty tone I can’t quite put my finger on — and the really, really, ugly, awkward bit where his Rolling Stone editor gets Lipsky to pump Wallace for an admission of rumored — and non-existent — heroin abuse), the book is a must read for Wallace-fans.  Not only is there insight into his life and history, but a lot of it feels like being in Wallace’s head-space, much like his fiction allowed us to feel.  Although Of Course You End Up Becoming Yourself isn’t a perfect book — and I think could have been much better with a different writer leading the interview — it’s an essential addition to the DFW bookshelf.