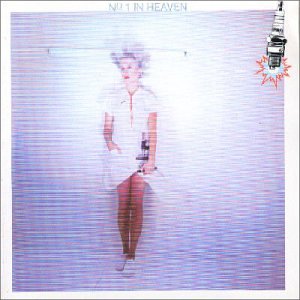 Cover of No. 1 in Heaven

Rev. Syung Myung Me:  This is one of my favorites — it’s only six tracks long, but, dang, what songs.  “Tryouts For The Human Race” is amazing — not only has it got a great sound and beat, but the lyrics are super clever, even compared to Ron’s other lyrics, which are all pretty much super clever.  It took me a couple listens to realize the song is sung from the point of view of a load of sperm.  Not many pop songs take that voice.  I think it’s because they know they won’t live up to this one.

“La Dolce Vita” is another one that just lodges in your head, and, well, god, “Beat the Clock”?  Dang.  There’s a reason they kept going back to that song — it’s a shoulda-been-smash-hit, from the songwriting and the vocal performance from Russell.  The capper, though, is the title track — “The Number One Song In Heaven”.  That is just about a perfect song.  Even if it’s two songs.  I don’t care, it’s perfect.  Good god, that song is gold.  The performance is dead on, of course, but again, it’s the lyrics.  The first part — I love the slight fear that’s in there: “This is the No. 1 song in Heaven/Why are you hearing it now you ask/Maybe you’re closer to here than you imagined?/Maybe you’re closer to here than you care to be?”.  That’s the flip-side of heavenly things — if we’re to take that literally, does that mean we’re about to die?  And can that mean we’re guaranteed entrance into Heaven, or is it just spilling out from the Pearly Gates while St. Peter is the Eternal Bouncer?

But anyway — then you have the second part of the song… which is about what happens to hit songs.  People love it, and it goes everywhere, is used in advertisements, and children sing it.  It becomes part of the fabric of existence.  And, well, there’s something amusing, if unsaid, about God getting royalties from ads.  It’s a gorgeous, perfect song.

The interesting thing is, you could probably make a concept album with the first and last cuts on this record — just arrange it a bit so it matches a life-story, and there you go. Hell, throw “Beat the Clock” after “Tryouts” and you’re halfway there.  You’re on your own on the best ordering of “La Dolce Vita”, “Academy Award Performance” and “My Other Voice”.

Aila: No. 1 In Heaven is one of the very best Sparks albums. It marks a definite return to form for the band, as well as a dramatic reinvention of the band’s sound. It may well be my favorite overall Sparks record – depending on my mood, it often is.

It would be easy to label the music on this album as “disco,” but for me it’s not that easy. The producer, Giorgio Moroder, obviously had a noticeable influence on the sound of this record – and there are certainly some similarities between this and other music he worked on in the late 70s. However, a lot of the music here seems heavier in terms of beat, and certainly more varied creatively. If anything, the sound is probably more reminiscent of music produced in the 80s by bands like New Order or Pet Shop Boys. It doesn’t really sound like anything else released in the late 70s. And unlike a couple of the Sparks albums that preceded this, there is really no filler on this record. Of course, one of the reasons for that might be the fact that this album contains only six songs. In fact, the only actual negative criticism I can honestly make for No. 1 In Heaven is it’s length. Six songs is far too short for an album! If the songs are very long it might make sense, but apart from the last song, which doesn’t seem lengthy while listening, that’s not really the case here. It clocks in at just under 34 minutes overall, so it’s not outrageously short in reality, but this is such a fantastic album that you kind of wish it could go on forever.

The first song, “Tryouts For The Human Race,” has an extremely infectious sound that strangely recalls elements of music produced by Talking Heads in the next decade. It’s also probably the best, and certainly most catchy song that seems to be about sperm (well, as far as I know). The next two songs, “Academy Award Performance” and “La Dolce Vita,” live up to the high standard set by the opener, and either would easily be the best song on countless other albums of the era. As it is, they are just excellent Sparks songs on an album which contains two or three better ones. “Beat The Clock” uses more repetition than any other Sparks song to this point, but in a very effective way that Sparks seem to have mastered over the years. It’s one of the best songs on this record. “My Other Voice” is the most experimental song, making interesting use of the flange effect and vocoder – but it’s certainly not “filler,” despite probably being the weakest track on the album (if I must choose one). The final track, “The Number One Song In Heaven,” is quite possibly my favorite Sparks song of all time. Fast, catchy, and inventive music, clever lyrics – it’s difficult to imagine wanting anything more from this song. It’s the knockout blow of a set of songs which have already basically “kicked the ass” of all popular music to this point.

As anyone reading this can probably tell, I absolutely love this album. There would be a lot of great albums from Sparks in the decades following, but nothing obviously better than No. 1 In Heaven, in my opinion. The fact that they managed several albums after this which might be as good is a testament to the greatness of the Mael brothers.