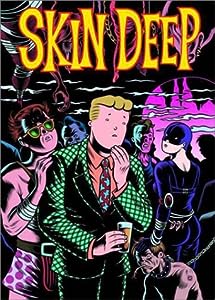 When I was young, my dad and I were both huge fans of MTV’s Liquid TV.  Actually, that’s not quite true — we still are, it’s just not on anymore.  Until they finally release it on DVD, we’ll be happy to make due with the burns of it I downloaded from torrents.  The great thing with Liquid TV is the way it turned me on to a lot of great artists; that was where I saw the work of Richard Sala for the first time, and it introduced me, in a sideways way to Charles Burns – though that’d be solidified with the documentary Comic Book Confidential which included a narrated Big Baby strip.

But anyway — the funny thing — when I watched Liquid TV, at the time I didn’t GET the “Dog-Boy” shorts that ended each episode of the second season.  Partly because they weren’t cartoons, but live action characters with weird plastic hair interacting with a green-screen and fakey props.  Whenever “Dog-Boy” would come on, I’d watch, hoping for something that’d reveal why it was on instead of more cartoons.  Sometimes there’d be a joke or something that the 12-year-old me would like, but for the most part it was just weird and, well, not animated.

Now, I get those shorts and enjoy them, and am a fan of Charles Burns’ work.  I think Black Hole was the first real work of his that I’d sat down to read, and it’s amazing, of course, and then I started going back to his earlier stuff like the aforementioned Big Baby.  And, well, it all comes back full-circle with Fantagraphics’ recent soft-cover re-issue of his collection Skin Deep, which opens with the original “Dog Days” story the “Dog-Boy” shorts were based on.

I suppose it’d be funny if it turned out I STILL didn’t get “Dog-Boy”, but sadly, that’s not the case.  The story works better all at once, though the shorts did explore a little bit more about his life.  But reading the original story, I wanted more into the character, more adventures and whatnot.  Honestly, I’m not sure if Burns ever really returned much to Dog-Boy after the “Dog Days” story, and while this edition of Skin Deep includes some earlier versions and designs of Dog-Boy, not much is said about anything else involving the character, other than some earlier strips appearing in RAW.

Enough about Dog-Boy, though — there’re two other stories (all linked together by means of a character in the story previous).  The second is “Burn Again”, a story about a man who becomes a cult leader after seeing God, a giant cyclops with terrible powers.  “Burn Again” includes a hilarious version of a Chick tract, and a complicated story that echoes parts of When Worlds Collide, some of Philip K. Dick’s work and the story of Marjoe Gortner, among other parts — all in a wonderful, frightening melange.

The book all ends with “A Marriage Made In Hell”, a parody/homage to both the 1950s romance comics and the same era’s horror comics, sort of in the E.C. vein, though with a twist E.C. wouldn’t have done.  Actually, a few twists, to be honest.  The artwork in this one has a slightly different style — a bit more angular than the other two stories, but given that so much of it takes place in another comic book, that stands to reason.  “Marriage” isn’t as eerie as “Burn Again” or as funny and engaging as “Dog Days”, but it’s still great; it’s the weakest not by dint of being a bad story, but because the other two are so strong.

Fantagraphics is constantly doing interesting things — not only with new titles, but re-issues of lost ones like this.  Skin Deep was originally published in 1992 by Penguin, and I don’t think I’ve ever seen a copy of that version; it was reissued by Fantagraphics in 2001 as a hardcover, and while I’d seen that one, I always remember it as being kind of expensive (but undoubtedly beautiful) — so it’s nice that there’s a softcover version now as well to bring this wonderful book to more people who might be scared off by the pricetag of the hardcover edition.  I believe there’s no difference between the two Fantagraphics editions in terms of content — so I don’t think an upgrade is in order; if you’re one of the lucky folks with a Penguin edition, you might consider an upgrade, but the new content is only a few pages and a few notes — so I don’t think it’s essential — but if, like me, you’ve never read this before, this edition is very welcome indeed.