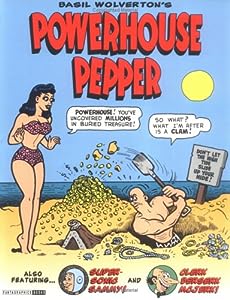 Fantagraphics’ volume of 11 of Basil Wolverton’s Powerhouse Pepper stories (along with 4 starring other characters) works as a great companion to their new Culture Corner volume, despite having come out in 1994.  Where Culture Corner showed Wolverton’s skill at doing brief half-page joke strips, Powerhouse Pepper shows how his style worked with longer, 10-page stories — and oddly enough, the difference isn’t as great as you might expect.  Like his shorter stuff, it’s packed with puns, rhymes and alliteration, but the added space gives him room to fill the panels with what Will Elder always called “Chicken Fat”, the sidebar jokes and gags that fill the page and keep you re-reading and discovering new bits.

Of course — Wolverton’s panels aren’t nearly as chicken-fatty as Elder’s (as just about no one’s were, with the possible exception of Wally Wood), but the flavor is still delicious.  The stories are a little formulaic (Powerhouse Pepper, a well-meaning strongman, runs into sadists who attempt to abuse Pepper who has a double comeuppance by not actually ever being hurt AND by cleaning their clocks), but the formula works due to Wolverton’s sense of humor and the payoffs in the punchlines.

My favorite of the stories is probably “A Scoot For Loot”, with an ice skating theme as it’s incredibly well-constructed.  Pepper doesn’t have any skates, so a crooked guy sells him some for five bucks; turns out they’re tiny toys that came in a snack box.  To get his five dollars back, Pepper chases the conman, and ends up falling through the ice and while he loses the jerk, catches a giant fish.  An ice fisherman sees the fish, and offers to buy it from Pepper for a thousand dollars; Pepper will only take 5, as that was all he was down, but gets a $95 bonus from the fisherman.  Our villain sees this and decides to pick the rich fisherman’s pocket.  He’s not terribly slick at it, and the fisherman chases him — which Pepper sees and joins in.  Pepper finally catches him, and brings him back to the fisherman, explaining that he too has a beef with the fellow, as he sold him the fake skates… but as it turns out, the fisherman’ll buy the toys for three thousand dollars as he collects the toys that come in the snack… which, as it turns out he owns the company that makes said snack, but hates the food.  Of course, Pepper loves the snack, so he declares that he’ll spend the three grand on buying boxes of it.    It just all comes together from the original gag to the payoff like a puzzle — and, of course, it’s funny.

One kind of strange thing in these strips is how in most of them, Wolverton draws a pretty girl as Pepper’s love interest — or sometimes just as an onlooker.  It’s strange not that Wolverton can’t draw pretty girls — of course he can — but that the idea of pretty girls existing in the Wolverton universe of cartoony grotesques doesn’t seem to jibe.  Still — it’s not really a complaint, just something to think about, and puzzle how they fit in.

The four non-Pepper stories are pretty good too — there’re three Supersonic Sammys, about a small alien in a tiny saucer, but with a big vocabulary who comes to Earth (his debut has him picking up Stalin, then realizing what a big jerk he is and dumping him back in Siberia) to help folks out, whether or not they want it, and one Hothead Hotel, about a terrible hotel clerked by Berserk McJerk, a noble goon who means well even if things don’t always work out quite right.  Of these, the Supersonic Sammys are the best, but Powerhouse Pepper is still the highlight of the compilation.

This is a thin volume, sort of an introduction into the earlier works of Basil Wolverton — and hopefully there will be a complete Powerhouse Pepper, or, even better, a multi-volume complete works series, like what Fantagraphics is doing with classic comics like Peanuts, or the work of R. Crumb.  And, of course, even with earlier collections like this one, Fantagraphics proves itself, once again, as one of the best comics houses out there, combining excellent content with a true and obvious love for what they’re doing.  Wolverton couldn’t find a better home, and I hope they continue releasing this master’s work.