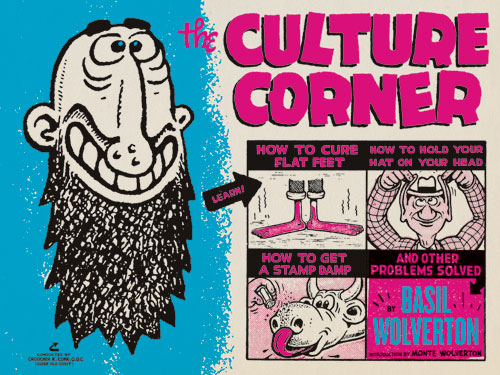 Basil Wolverton is one of the most easily recognized comic artists and one of the most beloved.  It’s always interesting to me how his art was often grotesque and vaguely disturbing (in the best of ways!) and that he was a minister as well.  I’d recently read about someone whose father forbid him two things: Rock and Roll and Basil Wolverton, and as such, he was drawn to both immediately; I wonder what the father would think to find out he was banning the work of a Vancouver, Washington-based minister.

Admittedly, this father wouldn’t have, most likely, much of a problem with Wolverton’s 1945 strip Culture Corner that ran in many of the Fawcett titles, but most notably Whiz Comics as a page-filler.  Culture Corner, hosted by Croucher K. Conk, Q.O.C. (Queer Old Coot), offers cultural solutions to standard (and non-standard) problems faced by modern people.  Stuff like how to tie a tie, how to scratch your back, and how to eat soup without slurping.  Very rarely are the solutions obvious, and even when an obvious solution is given, it’s pooh-poohed and shot down with an equally obvious flaw.  And, if you’re familiar with Wolverton’s style of humor — as well you should be! — you can gather the types of ideas Conk offers to solve these problems.

Fantagraphics has just compiled all of these strips in a beautiful hardcover, and as is their standard operating procedure, they’ve gone above and beyond.  While the originals no longer exist, they tracked down all of the published editions from the various Fawcett comics and did a dandy job cleaning them up — but if that weren’t enough, almost every strip has Wolverton’s original pencil roughs that he’d submit to the editor on the opposite page AND roughs for all the other strips that were rejected.

The pencils are incredibly interesting — most of them are pretty close to the final work; a couple have alternate gags, but very few are different from the published strip, including the obvious care that went into these roughs, despite the fact that they’d be seen by, most likely, two people at most.  The style is slightly looser, but most of the compositions and character designs are the same as what the final would have, but of particular note is the notes on the rejections.  Some are tagged “too grotesque” (amusingly, nothing that’d even remotely come close to Wolverton’s later Lena Hyena!), and there’re a few where Wolverton’s done notes to himself that he’d recycled a gag for another strip.  (Sometimes other Culture Corners, but usually for his other humor strips.)

Thing is, this book would be amazing even if it were only the published strips; unlike some humor strips from 65 years ago, these are still FUNNY.  Wolverton’s art is lively and hilarious as ever, but his writing (filled with his typical use of rhymes, alliteration and assonance) has a great rhythm.  The solutions to everyday problems offered by the strip still hold up, too — there are very few that are dated, and none that I saw where the joke didn’t make sense from the passing of time. Wolverton’s stuff is timeless even though these strips were mostly meant to be ephemeral they still resonate today.  And, well, Wolverton’s art is, as always, absolutely a joy, so even if they were all about clearing the party line to make a private call[1], it’d still be an absolute treasure.

[1] True story — when I recently watched the Rock Hudson/Doris Day movie Lover Come Back with my parents, we ended up having to pause the film so they could explain to me the ins-and-outs of how party lines worked and, basically, what the problem was with the film and why Doris Day COULDN’T just get a private line.  (That said: The film is still excellent.)