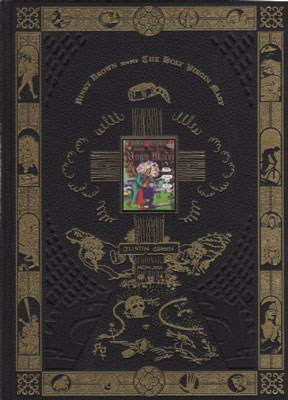 McSweeney’s always publishes beautiful editions — that’s one of my favorite things about their books, the idea of them as objets d’arte is as important as the literature inside — which often is, of course, worthy of such a beautiful form.

On the other hand, most ’70s underground comix, while undeniably art themselves, often took the form of the trashy and disposable; one could be forgiven for assuming the worst if they had no idea of what the contents were.

So, it’s particularly interesting to see McSweeney’s do a gorgeous edition of the 1972 comic book Binky Brown Meets the Holy Virgin Mary by Justin Green. The comic is about 48 pages, give or take — the first long-form autobiographical story in underground comix — but is in a huge (over a foot tall!), hardcover edition covered in gold-leaf. In fact, aside from its slimness, one could easily mistake it for a family Bible. The original art has been re-photographed in full-color, even when the original artwork was not — allowing the reader to see edits, marginal notes, and the actual paper the comic was drawn on.

As for the comic itself — it’s pretty good; some might say it’s more a classic for what it did (Art Spiegelman has said Maus wouldn’t exist without it) than for the story itself. I can definitely see that — I tend to wobble back and forth on how much I actually LIKE or ENJOY the book — though, regardless, I’m glad I read it and own a copy. It’s definitely an Important book — and one anyone interested in comics history, and particularly underground comix, should be familiar with. The story is sometimes a little frustrating and the art goes between very good to somewhat amateur, but considering the nature of the story, it had to have been hard to write.

The book follows Binky Brown (Justin Green’s stand-in) as he struggles with what will later be diagnosed as Obsessive-Compulsive Disorder. As Green didn’t know about OCD when he wrote it, the book sometimes comes off as a “See how the Catholic Church fucked me up?!” tome — but for readers, it’s clear that while the Church may have been the source and the excuse for some of his obsessions and rituals, there’s much more going on — and it’s no one’s fault, not Brown/Green, not his parents’ and not the Church; it’s just his brain chemistry.

This edition includes an afterword where Green talks about his later diagnosis, and how that informs his view of the work after the fact. He’s less angry at the Church as he was in ’72 (though he never returned), and understands that the narrative is important, too, as an autobiographical look at an OCD sufferer. In this way, the comic can be frustrating — you want the author to know that he’s got OCD… but of course, he doesn’t, and barring some form of time-travel, can’t. That’s not Green’s fault, of course, but for a modern reader, it makes it a bit more difficult.

Is this a recommendation? I think so — maybe one with a bit of hesitation. It’s definitely a book that’s “good for you”, but unlike a lot of “good for you” things, it’s not awful going down. It’s not an easy read, but its brevity definitely is in its favor; there are other Binky Brown stories, and, I have to admit, I’m not sure if I’m terribly interested in spending more time with him. But this visit with Binky is definitely worth it, even if he doesn’t become your new best friend.