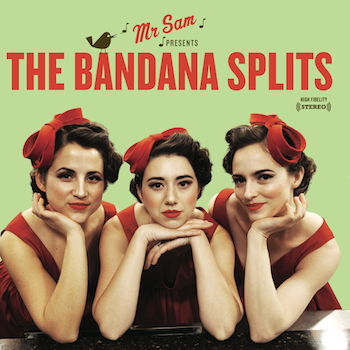 I’ve definitely got a soft-spot for retro-flavored records.  Some of it, like the Ditty Bops (one of my all-time favorites) or Katzenjammer , is because I like the original styles as well — the 20s and 30s, sorta cabarety-jazzy stuff.  (I also like what my friend Nick termed “the R. Crumb shit”, mainly that old jazz that is on the Ghost World soundtrack or that Crumb himself plays in the Cheap Suit Serenaders.)  Oddly enough, though, while, say, the Andrews Sisters don’t do a whole lot for me, I really enjoy folks like the Puppini Sisters, who’re definitely styled on that sort of thing.  And, of course, there’s the Pipettes, who have that 60’s Girl-Group thing down (and their garagey cousins in The Like, who are likewise amazing).  And now there’s the Bandana Splits for me to massively enjoy.

To continue the comparison to the groups I’ve mentioned, the Bandanas are like if you split the difference between the Puppinis and the Pipettes.  (Which makes sense, as if you combine two capital “P”s, you get a capital “B” which stands for Bandana Splits.)  Like the Pipettes, most of their songs are originals, like the first single, “Sometimes”, though there are a few covers on the album — like “You Don’t Have To Be A Baby To Cry”.  And it’s really hard to tell which are the covers if you don’t already know.  And given that a lot of those originals were written by Brill Building-types, that’s a huge compliment.

The album was recorded with all the vocals recorded live with the Splits all around one mic while their producer Sam Cohen (of Apollo Sunshine) played all the instruments (presumably not live to tape… though if he had a one-man band setup, I hope they release video of the recording sessions).  The recording method gives their album an appropriate retro sound that could fit in along other records of the 50s or 60s — though a bit cleaner sounding, of course, given that multi-tracking no longer necessarily results in a stacking of tape hiss.  The sound is perfect — the women can all sing amazingly well, and this style fits their voices perfectly, and Cohen’s arrangements are likewise perfect.  They’re not as jam-packed as Phil Spector’s Wall of Sound (and unlike most of Spector’s work, this album is in stereo, not mono) — but since the voices are the centerpiece of this magnificent record, it works.  The instruments compliment rather than overpower — though I love Spector’s production work, it often felt like his vocalists had to fight to be heard.  The Bandana Splits don’t have that problem — nor should they, with voices like that.

The album is out now on Boy Scout Recordings, and is definitely worth picking up.