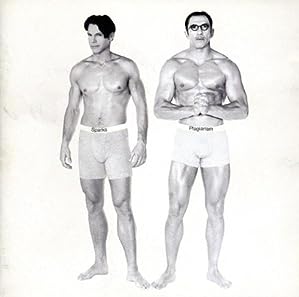 Who don’t love Sparks?  I suppose the folks who don’t know who Sparks are might not love Sparks, but that’s only because of plum ignorance.  But REST EASY, reader — we’re here to set you straight by reviewing ALL the Sparks records — and not just by one, but TWO (and maybe occasionally MORE!) Die-Hard Sparks Fan Reviewers.  We shall be your guide into the wonderful world of Mael.  Check it out!Rev. Syung Myung Me:  As I mentioned in the review of Music That You Can Dance To, one of the rules of record-geekery is that there’s nothing worse than a re-recorded greatest-hits album.  The whole thing smacks of desperation and lame “updated” production that can’t hold a candle to the original.

Of course, Sparks go ahead and do such a thing… and make it outstanding.  What’s up with them, anyway, taking standard, concrete, stone-written rules and breaking them, huh?  Where do they get off?! Not only does Plagiarism not suck, but I tend to think of a lot of the songs on it as the definitive versions.  This… this isn’t supposed to happen.

Plagiarism started life as an intended tribute album, but ended up morphing into a tribute-to-themselves album.  There’re a couple guests (Faith No More on a couple tracks and one each with Erasure and Jimmy Sommersville from Bronski Beat and the Communards), but mostly it’s the Maels’ show, with an assist from Tony Visconti (yaaaay!) on orchestral arranging and such.

There aren’t any new songs (unless you count the “Orchestral Collage”, which is all of :30 seconds, and “Big Brass Ring”, which was an Interior Design-era b-side/outtake originally), but the arrangements are usually pretty drastically different.  One of my favorites is “Funny Face”, which actually betrays what a sad song it actually is.  Some of the otherwise-forgotten songs like “Change” or “Pulling Rabbits Out of a Hat” are also given makeovers that remind the listener how great those songs are… and in the case of the latter was one of the reasons I wanted to go back and give Pulling Rabbits another listen.  Oops.

Making me want to listen to a weak album aside, Plagiarism is just about perfect.  As classic as cuts like “This Town Ain’t Big Enough For The Both Of Us” and “Something For The Girl With Everything” are, I think these versions are better, even aside from the technical improvement making the vocals clearer than on those original albums.  With “This Town”, it’s even a toss-up as to which I like better — the one with Mike Patton on co-vocal is pretty dang awesome, as is the one with just Russell.  If the Maels ever get sick of writing songs, I’d be reasonably happy if they went and did Plagiarism-style versions of all their previous albums.  But they should keep writing songs.  They’re really, really good at that.

Aila: Plagiarism is not a typical ‘greatest hits’ album. Of course, for Sparks, such a thing would be nearly impossible to do justice to anyway, as the band have changed styles so many times you’d probably need at least three or four volumes to make cohesive collections. But that really isn’t the aim of this album, this is basically an album of newly recorded alternate versions of a selection of past songs.

While mostly positive, the results of this experiment are somewhat mixed. A few of the tracks on here I prefer to the original versions. Most of them I enjoy, but would typically go to the original recording if I wanted to hear a particular song. And there are a couple that seem almost pointless. The album starts very strong with a new version of “Pulling Rabbits Out Of A Hat,” which was previously the highlight of a very weak album. The version here is orchestral and choral (one of several tracks expertly arranged by Tony Visconti), and it works surprisingly well for what was originally a mid-80s synthpop track. “This Town Aint Big Enough For Both Of Us” is given similar treatment, and while it’s seemingly the perfect sort of song for this, I definitely prefer the original recording. However, there is also a more ‘rocking’ version of the song later on the album, a collaboration with Faith No More (along with a take of “Something For The Girl With Everything”), which is much better. The first real weak spot in this album is the third track, one of two new versions on “The Number One Song In Heaven.” This version, taken from the second part of the original, is basically just a facsimile of the song with 90s instrumentation. It’s a pretty pale imitation of the original, lacking a lot of the bass in the original recording. This is one of only a couple tracks on Plagiarism I really don’t like (along with a weak version of the otherwise-great song “Beat The Clock”). The orchestral and choral songs are all pretty much great, even when they don’t quite manage to eclipse the original recordings, as in “When Do I Get To Sing My Way” and “Change.” A very well done (expanded and full-length) version of the a cappella “Propaganda” is one of the most altered songs on the album, as the original track was little more than a jingle. And there are of course songs that succeed without the magic of Tony Visconti, such as the guitar and synth heavy version of “Angst In My Pants,” and the very eery take on “Funny Face.” “Popularity,” “Amateur Hour” (with Erasure), and “When I’m With You” are all decent, but fairly straight-forward and forgettable versions of great originals. The decision to include a new take on “Big Brass Ring” is curious, as that was one of a very small number of tracks from the Interior Design period that wasn’t completely awful – if they needed to revisit that time at all I much would have preferred a new take on one of the several songs that were ruined by the poor production and instrumentation the band were using at the time. Possibly my favorite parts of Plagiarism are saved for last, with the second (this time fantastic) version of “The Number One Song In Heaven” (with Jimmy Sommerville) segueing perfectly into a beautiful take on “Never Turn Your Back On Mother Earth.”

Overall, as long as you avoid the mistake of thinking of Plagiarism as a ‘greatest hits’ record, it’s a great album. It probably wouldn’t be the best way to introduce someone to the band’s music (for that, basically just pick one of several great stand-alone albums), but for fans of the band it’s an amazing piece of work. By the time this album was released, in 1997, it probably seemed like it was high time to revisit some of their by then 27-years-long career. And maybe it was, but the truth is Sparks were still yet to make some of their best ever music. If not for the unlikeliness of the band repeating themselves, there could easily be another volume of Plagiarism.