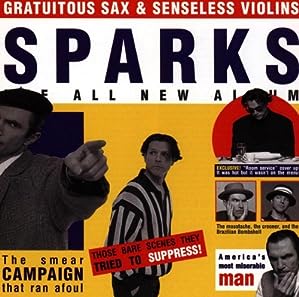 Rev. Syung Myung Me:  YAY, we’re out of the dregs!  It’s all smooth sailin’ from here on out!  Gratuitous Sax & Senseless Violins is one of my favorite Sparks albums and the beginning of the really cool, quasi-Pet Shop Boys era.  Actually, Sparks would probably balk at that, since I know they tend to think of PSB as folks who ripped ‘em off.  How I see it is that Sparks weren’t using that style for a while, so at least the Pets did good things with it.

Anyway, though — lots of outstanding stuff on this album.  The best is “(When I Kiss You) I Hear Charlie Parker Playing”, though there’s not a stiff on the entire album.  “Charlie Parker”, along with “Now That I Own The BBC” and “When Do I Get To Sing ‘My Way’?” were the singles, and, well, all three of those are very worthy of that status, but, honestly, I figure the record company could have just thrown a dart at the back sleeve of the album and had a great single choice.  The only ones that might have not quite worked are “Tsui Hark” — a great sound-collage based on samples from an interview with the great director — and “Let’s Go Surfing”, a decent song but one that I can’t ever remember.

A lot of the songs on Gratuitous Sax feel like they could have come from any of the following albums; “Frankly, Scarlett, I Don’t Give A Damn” or “I Thought I Told You To Wait In The Car” could fit well on Hello Young Lovers or Balls — or even Plagiarism, as they’re as good as anything they’ve ever done.  The great thing with Gratuitous is that it’s not a great album compared to the previous three, but it’s a legitimately great album.  It’s surprising that this one is so hard to find; it deserves to be in everyone’s collection.

Aila: Gratuitous Sax and Senseless Violins is one of the best Sparks albums ever made. Which was something of a special accomplishment for the band when you consider that it came after a six year layoff from music and the low point of Interior Design. It was also the first new Sparks album that I bought as a fan when it was released, so it’s got a bit of a special place in a corner of my mind because of that. I’ve probably listened to it hundreds of times (less so in recent years). That said, it definitely stands on its own merits as a great record, apart from any personal nostalgia I might feel.

The opening track, “Gratuitous Sax,” is really more of a jingle than a song – somewhat akin to the eponymous opener on Propaganda. It and the last track, “Senseless Violins,” are both really good for what are basically short song fragments which I suspect may have been created just to fulfill the bad pun of the album title. The next song, “When Do I Get To Sing My Way,” is the one I usually think of as the first track, and it’s also one of the best on the record – in the years since the record’s release it’s become something of a Sparks favorite for good reason. “(When I Kiss You) I Hear Charlie Parker Playing” might be even better, and it continues a very strong opening with another of the two or three best songs on the album. Honestly, rather than going into each song individually it’s probably just as well to say there aren’t really any bad songs on this one. If I had to pick a lesser one I’d probably go for “Tsui Hark” which isn’t really a bad song, but a decent instrumental with samples of the film director layered over it (incidentally, this is the same director they worked with on an abandoned film project during their hiatus). There are a couple other songs which I often don’t even remember until I listen to this album as a whole, but are still excellent songs – “Frankly Scarlett, I Don’t Give A Damn” and “Let’s Go Surfing” come to mind. Slight memory lapses on my part aside, the album doesn’t really contain any ‘filler,’ – probably the first Sparks record in over a decade for which that claim could be made. A few of my other favorite songs are the high tempo dance track  “Now That I Own The BBC,” the slightly goofy and heavily atmospheric “The Ghost Of Liberace,” and the typically eccentric “I Thought I Told You To Wait In The Car.”

This is one of the albums where Sparks kind of reinvented themselves, which usually means something fantastic (see also No. 1 In Heaven and Lil’ Beethoven). However, it would be wrong to say this album doesn’t owe anything to the band’s past work, as elements of some songs are certainly reminiscent of the style Sparks used on Terminal Jive, albeit a bit updated. But aside from those elements it’s a largely new style for the band, one which they’d pretty much stick with until Lil’ Beethoven. This was the starting point of over 15 years of great albums from here on out (I don’t feel they’ve made any real misstep since). Gratuitous Sax and Senseless Violins is a great Sparks album for fans of the band, and probably even for those who aren’t (yet) fans.