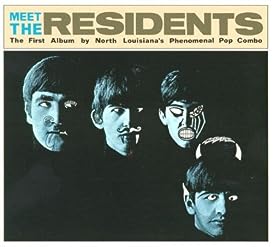 Cover of Meet the Residents

Richard J. Anderson: According to legend, the first Residents album sold only 40 copies in its first year. Imagine being one of those 40 people. Even in 1974, post-Captain Beefheart, pre-rediscovery of The Shaggs, this would have come off as heady stuff at best, or at worst a bunch of stoned weirdos banging around a recording studio. Of course, legend also states that most of those 40 copies came back unopened, so maybe I’m giving some people’s opinion too much credit. The closest touchstone for Meet The Residents is probably Beefheart’s Trout Mask Replica. Non-traditional musical forms, atonal sounds, off-kilter rhythms. It’s not easy listening, and it’s certainly not even the best place to start with the epic journey that is The Residents. I wish I could say I got into Trout Mask first. But, here we are. Even among the difficulty, rawness, plonking piano, squawking saxophones and amateur playing, there’s signs of what the future would hold.

There’s a lot to digest here. The first six songs blow by in a blur, a shifting, raw medley that goes from a satirical cover of “These Boots Were Made for Walkin’,” into the honky-tonk piano of “Numb Erone,” then country warbling in “Guylum Bardot,” mock playground chants juxtaposed with guitar freakouts in “Breath and Length,” the Beefheart-inspired “Conseulo’s Departure,” and finally the proto-punk of “Smelly Tongues.” All of this is done in the space of about nine minutes. You can’t fault these guys for progressive aspirations. In the first half of the first side of the record, they’ve already predicted their own future work in The Third Reich ‘n’ Roll and The Commercial Album. I tend to think of the whole first six tracks as one complete work, with a part that stands well on its own. From “Rest Aria” on, the album does settle down a bit, with longer-form tracks, save for the delightfully creepy “Skratz.” “Infant Tango” is probably my favorite cut on the album. The boys, probably aided by Snakefinger, slip into a tight and almost funky guitar groove. Then, there’s the cover/sample of “Nobody but Me,” by the Human Beinz incorporated into “N-er-gee (Crisis Blues)” taking the whole thing full-circle.

A lot of the future Residents trademarks are absent, too. The traditional “Singing Resident” voice is mostly absent, though appears on “Guylum Bardot” and part of “N-er-gee (Crisis Blues)”. There’s no real conceptual framework, just a lot of banging, hooting, and experimentation. One thing that is clear is that whatever The early Residents lacked in musical ability, they made up for in studio skills. There’s a lot of layering, texture, quick changes and cuts that make the experience a remarkable listen. No, it’s not the best starting place, but Meet The Residents is a great record to come back to once you’ve gotten your feet wet to see where it all evolved from.

Rev. Syung Myung Me: This album is the reason my girlfriend is afraid of the Residents.  She followed a similar track to me — we’re both huge They Might Be Giants fans, and we both were aware that the Johns both mentioned the Residents heavily as big influences.  As it turns out, I dipped my toe in by downloading an mp3 of “Constantinople” from the Duck Stab album via Hotline (which tells you how long ago this was).  On the other hand, she went to her local library and got the only two albums they had: The compilation Heaven and Meet the Residents.

She doesn’t remember which one it was she tried out first, but I’m thinking it was Meet, just because Heaven was more along the lines of the later Petting Zoo compilation of the “friendlier” tracks, and besides it makes a much better narrative, so I’m editing her life to make it so she definitely listened to Meet the Residents first.  Even the Residents say not to start with Meet the Residents.  I’m glad I didn’t — I tend to have a stronger stomach than her when it comes to weird music… but “Constantinople” is a much catchier, friendlier song than “Boots”.

Coming to it later, though, I actually quite like this album.  It’s one of the ones I listen to most often.  When it was re-released on vinyl, I picked it up immediately — partly because I love it so, but also to see about the story I’d heard where the pressing-plant engineer kept a copy of the album because the grooves on the album LOOKED so weird.  As far as I can tell, that story is apocryphal — unless I’m missing something, the grooves look pretty much like every other record I’ve seen.

Anyway — though the album is perhaps the roughest sounding, cuts like “Rest Aria” are surprisingly pretty.  In fact, “Rest Aria” was sampled by another musician and then later used in a Levi’s commercial.  My other favorites are “N-Er-Gee (Crisis Blues)”, “Infant Tango”, and the classic “Smelly Tongues” — though none of those are as PRETTY as “Rest Aria”.  In fact, prettiness is something the Residents do well (for example, the second half of “The Electrocutioner” from Duck Stab, or “When We Were Young” from The Commercial Album, or, well, lots of stuff from the later eras), though not something they’re particularly known for.  Still — probably stay away from this LP until you’ve heard a few others… probably at least until you’ve listened to Fingerprince, which is probably the most in feel of this album… and likewise, not a starter.

Aila: I am not a hardcore fan of The Residents. I do like them, and I’ve heard a few of their records before embarking on this series of reviews, but I only own a best-of and I’ve only heard a relatively small percentage of the albums. I am, you could say, a “casual” fan at best. Which was kind of the idea of my taking part in these reviews, to offer a different perspective. It’s also something that I will likely enjoy, as I do like almost everything I’ve heard, and I’m not sure why I haven’t gotten around to listening to the albums already.

The first Residents album, Meet The Residents, is one of the ones that I don’t think I’d heard before listening to it for this project. Or if I had, I didn’t remember it. Which might seem like a bad sign if it were that forgettable, but honestly this is a band who don’t really do the kind of catchy pop songs that stick in your head (anything but that, in fact). One thing I’m certain of is that if had been around in 1974 when this album was released and I’d heard it then, it’s one I never would have forgotten. The 70s were an era of musical experimentation, but this album would have stood out immensely anyway. From the opening track, “Boots” (an abbreviated and seemingly mocking version of “These Boots Are Made For Walkin’”), it’s clear that something strange is afoot. This is an album that approaches popular music from a different standpoint to anything that came before. It’s often very silly, sometimes sinister, and always engaging. The first few tracks are all relatively short and seem to run together in a way, and it’s difficult to find a highlight, but the one that seems to have lodged in my mind is “Smelly Tongues” – an absurd song which seems to literally be about smelly tongues, accented by the odd vocal styles that The Residents would make use of throughout their career. From “Rest Aria” onwards, the album consists mostly of longer pieces, some of which even flirt with the conventional (but never really consummate anything). There are hints of some things that came before, particularly Captain Beefheart, and I suppose some of the electronic musical elements draw a slight parallel to the contemporaneous work of Kraftwerk, but overall the sounds are unique, especially for the time. The standouts on the second half of the album are probably “Infant Tango” and “Seasoned Greetings.”

Meet The Residents is an very interesting and enjoyable record on any terms, but listening to it for (what I believe to be) the first time, I can’t help but imagine what it would have been like to hear it when it was first released. It certainly would have seemed like a bolt out of the blue, and would have made anyone who enjoyed the strange and eccentric hungry for more. Since I haven’t heard a lot the albums, I suppose it’s had the same kind of effect on me. I’m certainly looking forward to the next chapter.