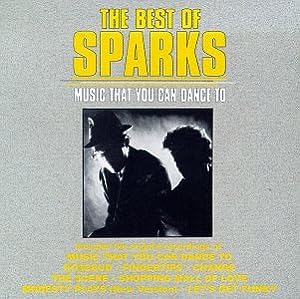 Cover of Best of

Rev. Syung Myung Me:  I always thought this was an underrated album — it almost seems like a footnote of Sparks history.  It doesn’t help that in the US, it’s marketed as a “best-of” called The Best of Sparks: Music That You Can Dance To, with really awful cover design:  Not only does it look like a cheap, gas-station tape that looks like it might even be a misguided bootleg, but for a “best of”, it doesn’t have any of Sparks’ hits like “Cool Places”, “This Town Ain’t Big Enough For Both Of Us”, “Amateur Hour” or anything.  One of the tracks is even labelled “New Version”, which as record geeks know, usually means it’s a lame cash-in recording with no particular love or care put into it, recorded perhaps after half the band, including the singer and songwriter have left and it’s left to the drummer to try to keep the cash flowing in so he doesn’t have to go back to the 7-Eleven.

This is a shame — because while maybe not the Best Of Sparks, it’s a damned good album.  And, to be fair, it’s got “Change” on it, one of their most beloved songs and one that actually DID get some airplay and chart success.  And, actually, it didn’t originally — on the Australian issue, and all subsequent ones, “Change” replaced “Armies of the Night” (from the Fright Night soundtrack).  Of course, with a song as good as “Change”, anything’s going to be trading up, but “Armies” is actually a really good, hooky song.  It might not be a single, but it doesn’t deserve to be in the dustbin of history; especially on an album that’s only 8 cuts long anyway — there’s room!

“Change” or not, though, this album has some other really great, classic tracks — the title track for one and “Modesty Plays” for two.  That’s just off the top of my head. (And for what it’s worth, the original was a single-only song from a few years prior — and it’s certainly not unheard of for bands to re-record single cuts for the album, so there.)  If you know your comics, the title might remind you of Modesty Blaise, which isn’t a coincidence.  The song was originally going to be a theme for a TV show based on the character, but the show didn’t get off the ground and Sparks had to change the title (but not the lyrics!) to get around any legal hassles that might arise from using the character’s name.

The rest of the album’s pretty good, too — the music tends to fit the original cover (a noir-ish black and white photo of the Maels); on the tracks from this album, there’s a darker feeling to them that gives it more edge than Pulling Rabbits Out Of A Hat, even if it’s likewise a bit more serious.  “Rosebud” is a really great single (that has nothing to do with Citizen Kane, in case you’re wondering), with the great hook of “The angels hide in disgrace/From your beautiful face”.

The album is very 1985ish, but in a way that takes its cues from bands that were doing quality music; “Fingertips” has a definite Oingo Boingo quality — particularly Dead Man’s Party or Boi-Ngo, and aspects of the entire record remind me of the more serious half of Barnes & Barnes’ Amazing Adult Fantasy (perhaps my favorite Barnes and Barnes record).  This is unfortunately the last record Sparks recorded with the Gleaming Spires lineup, and after the disappointing Pulling Rabbits, shows that this lineup of Sparks still had a lot of juice in it.

The opening title track is catchy enough, but ultimately it’s a catchy kind of mediocrity that definitely isn’t helped by the annoyingly moaning quasi-‘soul’ backing vocals. Still, it might have been a highlight on either of the Sparks albums before or after this one. The next song, “Rosebud,” is again marred by the annoying background moans, and it’s clearly a better song, but it’s certainly not the Citizen Kane of music. This is one of the first Sparks songs I remember using a sort of spoken monologue part along with the singing, which would be used to mixed effect throughout the rest of Sparks’ career. “Fingertips” is a pretty forgettable song, with lyrics that are banal but mercifully short. The next song, “Change,” belongs amongst the best Sparks songs ever made, and might be my favorite Sparks song of the 1980s. Another one that employs the partial monologue, this time with somewhat bizarre/funny lyrics, it’s nearly perfect in my opinion. It’s also pretty engaging musically, and suits the kind of instruments and sounds the band used in this era (there’s a remake of this song a decade later on Plagiarism, which is interesting but not quite as great). “The Scene” seems like a somewhat ill-fated attempt at something interesting, at least musically (lyrics not so much), although almost anything would have seemed like a bit of a let down after “Change.” But I do think this is a song that suffers somewhat from the synthesizer sounds Sparks were using at the time – the bass, for instance, sounds like it’s straight out of Seinfeld, which really isn’t a good thing in this context. There’s a rare Ron Mael (spoken) vocal on the next track, “Shopping Mall Of Love.” Unfortunately it’s not a great song, despite the attempt at something different musically and the little Fats Domino reference that appears in the lyrics. “Modesty Plays (New Version)” is a difficult one to measure. The first version, which was an unsuccessful single a few years earlier, was originally intended to be titled “Modesty Blaise” (after the comic book character of the same name) and the lyrics make a bit more sense in that context. I’m not sure why the band chose to remake this song, because honestly it’s not really an improvement on the earlier version, although that one hadn’t appeared on an album (it was actually made for an unsuccessful TV pilot) so perhaps that factored into the decision. Regardless, it was a relatively mediocre song to begin with. The last song on the album, “Let’s Get Funky,” is one I’d almost completely forgotten about. Which is one of the reasons I’m glad this review forced me to re-listen to Music That You Can Dance To, because it’s a really good song that I think is easily the second-best on the album. The music is a slightly odd electronic mish-mash with overtones that hint towards country music (although maybe that’s in my mind only, like “Dance Godammit” from Sparks In Outer Space). The lyrical narrative of this one is what really makes the song, though. It’s an absurd little story where Russell (or whatever somewhat “folksy” character is intended to be the narrator) meets a decidedly unappealing-sounding young woman at a Greyhound station who can apparently only say ‘Let’s Get Funky.’ The song is a little bit strange, a little funny, and maybe a little confusing – most of the things I love about Sparks, honestly.

One of the things that’s always amused me about Music That You Can Dance To is the fact that it ended up being released as Music That You Can Dance To: The Best Of Sparks by some unscrupulous record company at one point (in fact, this is the version I have). It’s certainly not “the best of” Sparks, not even close, but it really isn’t a bad album. And compared to what came immediately before and after, it seems like a sparkling oasis in a nearly bone-dry desert.