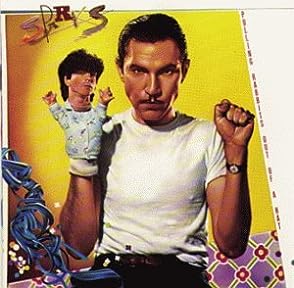 Cover of Pulling Rabbits Out of a Hat (Reis)

Rev. Syung Myung Me:  This is another one of those albums like Terminal Jive, where when I first listened to it, it didn’t click with me, and when it too was a casualty of my music drive crashing, I didn’t notice until it came time to do this project.  Unlike Terminal Jive, unfortunately, after re-ripping and loading it on my iPod to live with for a few weeks, I still don’t really care for this one.

It’s a bit more of a serious record — not as much of the patented Sparks Sense Of Humor(TM) is on display — but, unfortunately, it’s not as moving as Sparks are capable of being.  A lot of Sparks’ best has a real emotional core to it — like “Tits” from Indiscreet, but it’s just kind of absent here.  The title track is by far the best song on the album (and seemingly the only one they ever really feel like revisiting); a lot of the rest are either forgettable or phoned-in.  “Love Scenes” has what should be an amusing-enough hook (making movies as a metaphor for making love), but nothing’s really done with it.  “Pretending To Be Drunk” is better, but, again, it just comes off like a missed opportunity — it seems if this song were written by the Sparks of a couple years earlier, it’d be a classic, but here, it just seems flat.

Honestly, the only other song on the album that seems to pop out to me is “With All My Might”, another decent one, but despite having just heard songs like “Sisters” or “Kiss Me Quick” or “Progress”, I can’t even recall them in my brain.  This was the only Sparks record NOT to be released in the UK, and, honestly, it’s easy to see why.

Aila: Pulling Rabbits Out Of A Hat is the first real contender for the worst Sparks album ever made. There’s very little positive to be said for this record, except that there might be one worse Sparks album, and it may have a couple decent songs. And it does probably have the most entertaining cover art of any Sparks album (featuring Russell Mael as Ron’s puppet).

Stylistically this is a continuation of In Outer Space, only without the humor and charm of that record. However, it does start decently, with the eponymous opener – one of the few songs on the album that are genuinely worth going back to (in fact Sparks would do just that with the song, about a decade later on their ‘remakes’ album, Plagiarism). The album then takes a rather sharp downturn, with the lyrically daft “Love Scenes,” the wasted opportunity of “With All My Might,” and the obviously intended-as-funny (but not) “Pretending To Be Drunk.” The next song, “Progress,” might be slightly entertaining if it were intended as satire, but in this case I have the feeling it’s an earnest attempt at cutting edge mid-80s synthpop (which, in any case, is something which should NEVER be attempted). The instrumental “Sparks In The Dark” tunes (two parts) are decent, but nothing to get excited about. “Everybody Move” seems like it could have been interesting in a satirical way with a bit more effort (similar to “Dance Goddamit” from In Outer Space), but it fails in much the same way “Progress” does. “A Song That Sings Itself” is a bit mundane, but it’s probably not as offensively bad as most of the songs on this record (which I guess means it’s a ‘winner’ by lowered standards). “Sisters” is one of the songs that I’d almost forgotten about before re-listening to the album for this review, and it’s better than I had remembered. It’s actually a pretty decent song, probably one of the two best on the record – it’s at least musically engaging and it has some nice background vocals that compliment it well. “Kiss Me Quick,” which is the last song with vocals (the album finishing with the second part of “Sparks In The Dark”) is pretty awful, especially lyrically, and probably serves as an appropriate ‘last word’ for Pulling Rabbits Out Of A Hat.

To put things in perspective, even this, which is unequivocally (in my mind) one of the two worst Sparks albums, is not all that bad. It’s at least better than most of the mainstream music released in 1984, although to be fair most of the mainstream music from that year was flat-out terrible. Sparks weren’t a mainstream band, and needed to do something interesting to win new fans and/or engage their current fans. They didn’t do that with Pulling Rabbits Out Of A Hat, and to be honest they wouldn’t really do it again until 1994’s Gratuitous Sax And Senseless Violins. This was the start of a really poor period for Sparks, although it does improve slightly with their next record.