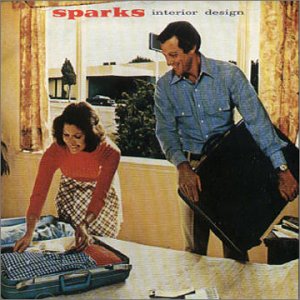 Rev. Syung Myung Me:  Interior Design is easily Sparks’ worst album; it’s kinda funny that it does come between a decent one and one of their all-time best albums.  (Also, like the previous Music That You Can Dance To, this one was ALSO re-released as a best-of, but only in some European countries.  Talk about your cruel jokes.)

This album was released in 1988, and, boy does it not let you forget that.  It actually sounds like Total DEVO in some places — amusing since this is the first record in a while WITHOUT David Kendrick (who played drums on Total).  “So Important” is a little catchy, but nothing really special.  “Just Got Back From Heaven” is a bit of a slog, just… like the Maels are writing what they think a hit single by a boring band should sound like.  It’s strange — this is the first Sparks Project review that’s actually felt like a chore rather than something fun.

Basically — if you’re a casual Sparks fan, run away from this album.  If you’re a die-hard, get it last to fill in the hole in the discography.  Unlike other misfires, it’s not even really particularly interesting.  It’s no real surprise why they never really came back to this one.  For example, the only track from Plagiarism that’s from this one is “The Big Brass Ring”, which was a b-side from this era only tacked on to the end as a bonus track on a later issue of the CD — and on the best-of The Heaven Collection, “So Important” is the only song to make an appearance.

At least after this one is Gratuitous Sax and Senseless Violins.  That’s the only good thing I can really say about Interior Design.

Aila: I’m just going to say it: Interior Design is a bad record. This isn’t one I’d listened to much, and before now I thought it was only a contender for worst Sparks record. I was wrong – it wins worst easily. It’s really the only Sparks album that crosses the threshold of ‘bad for a Sparks record’ to ‘bad for ANY band.’

The first song, “So Important,” isn’t the worst on the album, but it’s telling that this was a single considering its mediocrity. It’s very much a product of it’s time – the late 80s, which may well be some of the worst years in the history of popular music. Lame synth sounds and corny production really ruin any little pieces of decent songwriting that exist on this record. “Just Got Back From Heaven,” the second single on the album, isn’t really any better. “Lots Of Reasons” is a little better, at least in terms of being somewhat engaging musically, but it still isn’t a song that I’d claim to like (rather, I find it tolerable). There’s probably only one track on the whole album that rises to the level of something I “like” – and that’s “Love-O-Rama.” It’s not exactly a great song, but there’s something about it that I do find appealing, which really can’t be said of the album as a whole. It could just be the stereo balance shifting, but it’s at least memorable. There are also a couple songs on here which could have been decent if not for the awful production and overall corniness – “You Got A Hold Of My Heart” and “The Toughest Girl In Town” come to mind, they’ve both got decent melodies at least. Some of the songs are just flat-out awful in my opinion – “Let’s Make Love,” “Stop Me If You’ve Heard This Before,” and “A Walk Down Memory Lane” are all pretty worthless. The last song on the album, “Madonna,” seems to be an attempt at another monologue/story song like the ones that were on Music That You Can Dance To, but unlike those songs, this one isn’t really interesting in the slightest. Why there are three foreign-language versions of this song included as bonus tracks is beyond me – one time really was enough.

If it seems like I’m being overly harsh about this album, it’s only because the high standard Sparks have set over the years makes the relative quality of this album all the more disappointing. Looking at the few positives, I suppose you could say it’s got one decent song, and a few that could have been worthwhile if they’d been recorded and/or arranged differently. But really, that’s just not good enough for Sparks. I wonder if they were somehow distracted while making this album? After making this one they wouldn’t release another for about six years, as they worked on a film project that ultimately ended up going nowhere. Whatever the reason, the fifteenth Sparks album is one to miss. But the absence from music that it preceded might have done the band some good, as the next album turned out to be a masterpiece, and the start of another great era for the band.