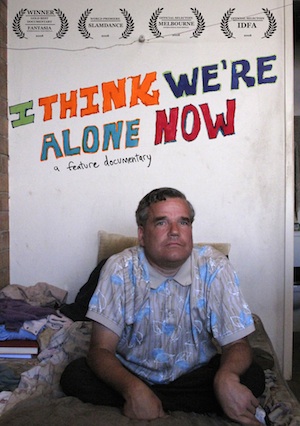 I’ve wanted to see I Think We’re Alone Now since I watched the trailer online with my friend Josh when I went to New York last February.  The documentary follows a couple of die-hard fans of Tiffany (the singer from the ‘80s who first made her career by touring malls rather than conventional venues).  The trailer was pretty amusing, and while I definitely wanted to see the full feature, I was a little afraid that it was going to play it for laughs, making fun of outsiders and folks who are a little weird.

Luckily — this isn’t the case.  While the trailer kinda plays up a little bit of that, probably to make it more appealing to potential moviegoers, the film is very sympathetic to the two leads, Jeff Deane Turner and Kelly McCormick, and that’s why the film works well.  It’s only about an hour long — but an hour of pointing and laughing would get old somewhere past, say, the third minute, about where the trailer stops.

This isn’t to say there aren’t some cringey moments, but it’s more “oh, dear, don’t do that!” rather than “Hah, you schmuck!”, mostly at Jeff Turner’s tendency to over-share.  Of the two leads, Turner is more likable — he’s a friendly guy with Asperger’s — so he has the tendency to go on and on about his obsessions, but, well, he’s so enthusiastic that even while you most likely don’t care that Tiffany happened to play at this particular venue last year and what the audience was like and that folks climbed on the stage and got arrested, you can at least admire his… commitment.

He’s got his problems too, of course — in the 1980s, Tiffany got a 3-year restraining order against him for presenting her with a katana and five white chrysanthemums. (Turner explains that that’s a  very high honor in Japanese society, seemingly not realizing that giving someone a deadly weapon is a little strange in American society.)  He’s a bit of a conspiracy theorist, a follower of bizarre pseudo-science involving a telepathic communication machine, and a person who hates fascists (where “fascism” is defined as “someone who disagrees with me”).  Though, to be fair, though not an actual fascist, Turner’s step-father, though described as such, does come off as a bit of a jerk.

Kelly McCormick isn’t quite as instantly likable as Jeff Turner is.  Turner’s an outgoing, friendly guy, where McCormick is a depressed introvert — nothing wrong with that, it’s just harder to make that kind of immediate connection with her.  That said, it’s easy to see why she’s depressed; she doesn’t have many friends — and it seems that a lot of the times the few friends she does have don’t quite understand her.  McCormick was born intersex, and is in the process of transitioning, yet she’s often referred to as “he” or “him” by other interviewees, despite that McCormick refers to herself as “her”.

The film is intercut between Turner’s and McCormick’s stories, and follows them up to the point where the two leads finally meet each other before a Tiffany concert in Las Vegas.  Amusingly, they don’t really seem to care for each other much — which isn’t helped when, after finally getting to meet her idol for the first time, getting a kiss and hug from Tiffany, McCormick attempts to explain the joy she feels to Turner, who inadvertently tries to one-up her by talking about how in 1988, Tiffany hugged and kissed him in front of fans at a concert.  (As an aside: It’s hard to tell with Turner if all the things he’s said happened HAVE happened at all — it’s a mystery as to whether or not he’s merely exaggerating or making things up out of whole cloth.)

The nicest thing is that the film has a happy ending — meeting Tiffany seemed to give McCormick a big boost in her self-confidence, and she’s started taking care of herself better and has made a new friend (who actually refers to her with the right pronouns), a big step up from the beginning of the film where I was afraid it would end with her suicide (forgetting that the very DVD I was watching had a commentary track featuring her).  As for Turner, he’s cleaned up his apartment and sifted through much of his belongings, getting rid of “two dumpsterfuls” of stuff — and accepting of his “friendship” with Tiffany, no longer desiring a romantic relationship with the singer.

Sean Donnelly, the director, while not the best at the technical aspects (there’s one brief scene with no audio, and the footage looks like it was shot with a high-end camcorder) is very good at telling a story and being sympathetic to characters that a lesser director would be inclined to present as subjects of mockery.  It’s for this reason, I’d recommend this film over ones like Chris Smith’s American Movie or Home Movie, which, while technically well-done, have this unappealing veneer of meanness getting in the way of what should be good films.