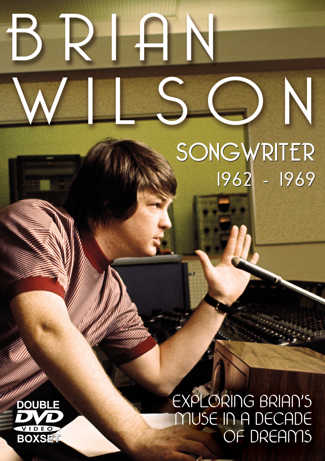 Brian Wilson: Songwriter 1962-1969 might be the best straight-to-dvd music documentary I’ve seen. Of course, that might not be the biggest compliment, as I’ve only watched a few and these things tend to be relatively shoddy productions. However, the production quality of this one is relatively high, and for fans of Wilson and/or The Beach Boys it’s well worth watching.

The program begins, unsurprisingly, at the beginning of Wilson’s musical career. Interviews with a few of Brian’s early associates provide useful, if slightly predictable insight. Most of it isn’t anything a dedicated fan wouldn’t have already heard about, but the documentary does take care to provide an awful lot of detail. And to it’s credit, it focuses mostly on the songwriting and recording process, rather than personal relationships. There are also particularly detailed segments dealing with Brian’s influences and inspirations. Explorations of The Four Freshmen and Phil Spector, for instance, focus on the influences they had on Wilson without veering too far towards boring diversion. Interestingly, as well the standard Beach Boys story, the program also delves into Wilson’s activities as a producer in the 1960s, which is perhaps slightly less well-trodden territory.

The documentary includes a lot of interviews with and archive footage of figures associated with Brian in the 1960s, as you might expect. The one thing it’s really missing is the participation of Wilson himself, although you probably can’t really fault them for that. There are a few music experts and biographers of Wilson who also take part, and in some ways their contributions are more interesting than the detail provided by the somewhat “fringe” Beach Boys members David Marks and Bruce Johnston, for instance. Probably the most entertaining interviewees are members of The Wrecking Crew, the studio backing band who worked with Wilson through much of the 60s. They provide most of the levity in what is otherwise a fairly serious program.

While this is overall a very good dvd in it’s category, there are a few minor technical quibbles. The dvd menu is a kind of poor to be honest, and strangely the title of the program itself appears to be Brian Wilson – Songwriting 1961-1969 as opposed to Brian Wilson – Songwriter 1962-1969 on the dvd cover. This doesn’t really detract from the overall quality of the main program, but it does seem like quite an amateur mistake to make, especially when considering the relatively high quality of the content. The extras on the dvd aren’t many, but they provide probably around 20 minutes of extra material, and you get the feeling they included pretty much every bit of content they reasonably could have (bloopers or outtakes for a documentary would have been pretty silly, although I’d probably watch them, sadly). The documentary itself also ends with a somewhat strange abruptness, it seems like the filmmakers might have originally intended to go a bit further into the chronology, but considering the show already clocks in at slightly over three hours this might not be such a bad thing. The running length isn’t really a problem if you’re seriously interested in the subject matter, although it probably would be a bit much for a more casual fan – it would probably need to be edited down to an hour or broken up into perhaps three parts, to be honest. That said, if you are seriously curious about Brian Wilson’s music activities in the 1960s, this is three hours well spent.