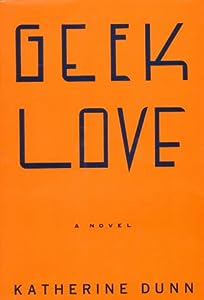 I like books and movies that really stick with you.  When I first saw Barton Fink, I loved it and couldn’t stop thinking about it for a couple weeks.  When I saw Mulholland Dr., I didn’t like it initially, but realized it was a damn good film when, again, I couldn’t stop thinking about it for two weeks.  And, Geek Love is like that too — and like Mulholland Dr., at first I wasn’t sure if I liked it.

It’s a book I’ve always been aware of — when it came out, and for a long time after, it was ALWAYS in the local newspaper’s book section as a bestseller or given plugs as being people’s favorite book or whatnot.  Seeing as I’m in Seattle, from the title, I always assumed it was some cutesy thing about IT people falling in love and, I don’t know, talking about Star Trek while awkwardly making out or something.  Needless to say, I had no interest in reading it.

Recently, Janet sent me a copy as it’s also one of her all-time favorite books.  She and I have pretty in-sync tastes, so I figured there was something I must have been missing about this nerdy-people-relationship book.  So, after a little while, I picked it up and started reading.  I was taken by surprise when I discovered in the first couple pages that I was thinking of the wrong type of geek.

“Geek” nowadays typically immediately brings to mind doughy guys with glasses who fix computers.  Um, folks like me.  But, of course, it originally referred to the folks at freak shows who didn’t have a medical-type anomaly, so they’d have to do other things to impress/frighten the crowds — like biting the heads off chickens.  And it’s THESE type of geeks who are the focus of this book.

Actually, that’s not all-together true — the bulk of the main characters are freaks; Arturo the Aqua-Boy, Elly and Iphy the conjoined twins, Oly the albino dwarf.  But there’re geeks too — like their mother, who met their carnie father through geeking.

So, anyway — I won’t get too much into the plot, as I figure that the two camps of folks aware of this book are either ones who read it and know what it’s about, or folks like me who thought it was a hokey genre exercise — and for those people, that description alone should be enough to prove them wrong.

But  yes — the book; like I said, I wasn’t sure if I liked it at first.  Some aspects didn’t seem right to me, some seemed a little easy, some seemed a little unreal.  I’d mentioned to Janet that I found myself agreeing more with Tasha Robinson’s comments on the AV Club‘s group read of the novel — though I mentioned, too that I liked it more than she seemed to.  Janet disagreed and then inadvertently gave me the key to the novel.

If you’ve read the novel and perhaps didn’t enjoy it so much, here it is — otherwise, STOP READING NOW:

The Key To The Novel — A BIG OL’ SPOILER IN OTHER WORDS:  Chick’s not only blocking pain.  He’s also controlling people’s thoughts.

There’re a couple sly references to this in the novel, but nothing is made explicit without analyzing the text and catching a few references.  When I thanked Janet for unlocking it, she said she didn’t even pick up that until the second time through.  It was that moment that made everything click and made me realize what a great novel it is.  I’m very glad I sat down and read it, even though at first blush, it didn’t seem to quite come together.  But that’s the great thing — not everything is completely on the surface.  The book makes you think a lot about it, and once you do, you’re rewarded with the way it all comes together and snaps into place like a puzzle.  Mulholland Dr. didn’t snap together this well — but, I’m not sure it was supposed to.  But like Mulholland Dr., Geek Love is a well-constructed work that really requires attention, even long after you’ve finished reading the actual text.