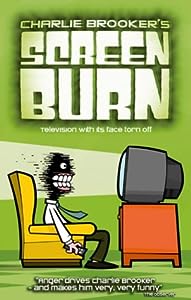 Charlie Brooker‘s often been sort of on my periphery; he’s worked with Chris Morris before, and I’d seen the TV Go Home site of course, but what made me really like him (aside from Nathan Barley, of course) was his Screenwipe series, an amusing and analytical look at how television works.  I’d also known he’d written for The Guardian, but I hadn’t read a lot of those articles.

So, anyway — loving Screenwipe, I figured I’d get some of his books, and started with Screen Burn.  Screen Burn is the title of his TV column from The Guardian, and while I knew that Screen Burn was about TV (the tagline for it is “TV With Its Face Torn Off”), I didn’t know that it was a collection of his columns, and that the columns were more of a “This is what’s on TV this week” type of thing, rather than the behind-the-scenes type analysis of Screenwipe.

I might have been initially slightly disappointed, but as it turns out, the columns aren’t as ephemeral as you might think given the subject matter.  Which is to be expected seeing as they took the time to collect them into a book they’d expect to sell to people.

Again given the subject matter, you’d think it’d be a tough sell to an American; after all, of the shows Brooker writes about, I haven’t seen, oh, 99% of them, and haven’t even heard of about 95%.  In fact, about the only American show he really spends much ink on is 24, which I’ve never actually watched an episode of.  Lots of references were lost on me — and some I’d expect to be lost on even the most hardcore of American Anglophiles (Hi, Aila!) — but still, the book is immensely entertaining.  I’d figure I’d enjoy it even more if I knew what the hell he was talking about!

Actually — the great thing with articles like this is that, as they’re written in advance of the shows airing, Brooker explains quite well what the programs are that you should or shouldn’t bother watching.  And, too, like a lot of columnists who are successful, sometimes he gets into areas that are only tangentially related to the topic they’re supposed to be writing about.  And, well, it helps that he’s a great writer with a breed of wit that hits right in the comedy center of my brain.

Brooker’s often thought of as cynical — which he is, sure — but he’s also very emotionally true as well.  There’re columns about the British version of Temptation Island (based on the abysmal Fox show where couples are put on an island with a bunch of single, hot-type people who’re trying to make out with them and break said couples up), where Brooker rails against the horribleness of television that tries to ruin people’s relationships and to some extent their lives.  There’s also a show in the UK called The Luvvies, “The Award The Stars Don’t Want”, where one was awarded to comedian Les Dennis making fun of his horrible divorce. Brooker objected and called for any information on whether or not the producer of The Luvvies had any devastating heartbreaks that could be mined for “laughs”.

Likewise, too — Brooker tends to agree with me that attack humor can be funny, but ONLY when the subject deserves it.  In an article about a similar show to Trigger Happy TV, he wishes to do away with Candid Camera-style pranks in favor of the absurdist skits Trigger Happy TV would often do (like, say, someone walking a taxidermic dog in a park — there for people to see and be confused by, but no actual confrontation with strangers).  As a talented comedy writer, Brooker’s thought a lot about how, why and when comedy works, and it’s very interesting when he analyzes different comedy shows.  (That said, I disagree with him on Monkey Dust; everything I’ve seen from that program has been pretty dang funny.)

Even though Screen Burn wasn’t what I thought it was going to be, I’m very happy with what it IS, and I look forward to reading his other books of columns, Dawn of the Dumb and the brand-new The Hell of it All.  Whether or not you’re a Brit or American, or TV fan or not, I recommend it for an intelligent, hilarious look at a medium which isn’t always intelligent or hilarious — by someone who isn’t afraid to point out when TV does things right.