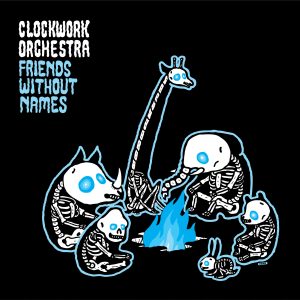 Clockwork Orchestra is the project of Paul Mangan from Ireland, and he’s just released his first album for White Label Records, Friends Without Names digitally and a CD edition will follow on Guy Fawkes Day.  I don’t think the date being Guy Fawkes Day has anything to do with anything, but how many dates are there that have a nifty rhyme that go along with them?

Friends Without Names is very synth-based; there are some really cool chiptune sounds mixed in with more traditional keyboard sounds.  The likely single is “Zebedee”, a fast-driving groove that gives the album its title.  It’s definitely my favorite track of the album — though a little different than many of the other tracks, which are generally a bit lower-key.  In a way, some of it reminds me of Princess Chelsea, whom we’ve already covered at Kittysneezes.  Probably the other touchstone I hear in here is Cardiacs — and, yes, I realize how little sense it makes to say “it’s kind of like Princess Chelsea and Cardiacs”.  But it does!  And that’s definitely a good thing.  Maybe a little bit of Momus, too… which I guess just makes that particular comparison even more confusing.

I don’t know if Mangan’s a Cardiacs fan (or Princess Chelsea or Momus fan, for that matter), but his listed influences (Eno, Sparks, the Residents, Roxy Music, the Stranglers and Joe Meek to name but a few) are a pretty high-quality group of people — and all people I can kind of hear in Friends Without Names.

Some of the synth sounds are a little too digital-sounding for my tastes — I do tend to the more analog side of the synth spectrum — but the bleeps and bloops of some of the 8-bit sounds (and “Black Ice” has quite a lot of them to its definite benefit!)  in the mix make them go down a bit easier. Don’t be confused, though — Clockwork Orchestra is definitely not a chiptune band; the video-game-esque sounds are not the point or draw, but just another texture used.  The sounds are in service of well-written and sung pop songs.  I really enjoy this album — it’s a mellow listen, but mellow is sometimes quite nice, and Paul Mangan’s stuff is very quite nice.