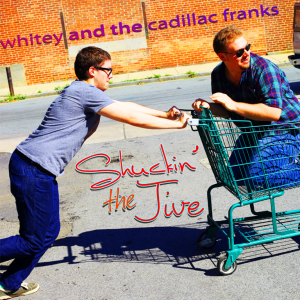 It’s generally a good sign when an album opens with a DEVO sample, at least in my eyes.  And Shuckin’ the Jive by Whitey and the Cadillac Franks opens with one of the screams from “Growing Pains”, so there you go.  If you want me to listen to your record, that’s a pretty good way of going about it.

It also helps if I know one of the people in the band — in this case, Joey Migeed, who’s chimed in on The Sparks Project and made this video for a Barnes & Barnes song that I posted to OST a while ago.  (Unfortunately, it doesn’t help that I AM lazy and that it took me about a year to sit down and review the album. Oops.)  So yeah, fair disclosure, I’m a friend of half the band, but as always, I try my best to be objective.  So there you go.

Anyway — Shuckin’ the Jive is very well recorded, which is very nice, particularly on a self-recorded/released album.  Lots of very clean sounds, and the songs themselves are catchy.  There’s cool textures going on in the background, like the chimes at the end of “Super Chibi Robo”.  “Sewer King” is a great, driving rock song, and “Chuck E. Cheese” is a neat chunk of synth-funk.  Joey’s a friend of Robert Haimer of Barnes & Barnes, and his influence is clear both on the music and the production skills.

If there’s a flaw, it’s that sometimes the lyrics try a little too hard to be funny or goofy. That said, there’s only one real misfire in that department: “Frowny the Clown” which treads pretty old ground with similar subject matter to the Odgen Edsl‘s “Kinko the Clown”, but loses the wit of that song.  “The Day The Zombies Come”, however is the exact opposite of “Frowny the Clown”,  and actually flips the script and makes me ENJOY a fun song about a topic I tend to think is too played-out-by half to be the best song on the album.  (Has Dr. Demento played this one yet?  If not, he needs to get on that.)

Some of the other songs are a little half-baked, though.  “No Pants Today” is great on the verses; I love lines like “Sweating the days/Just to come home at night/To centipedes and fear”, but the song is undermined by the chorus of the joys of only wearing briefs below the waist).  I have the same issue on some of these songs that I do with Jonathan Coulton… but then I think it’s pretty clear that it’s me against the Universe on the subject of Coulton (and like him, Whitey and the Cadillac Franks base their songs in good pop hooks and grooves).

Overall, Shuckin’ the Jive is a strong debut album, and definitely worth the download (pay what you want, via the band’s Bandcamp, and streaming free at their Soundcloud).  Whitey and the Cadillac Franks could be a great band with stronger lyrics, but as they are now, they’re a very good band.  Check ‘em out.  And then don’t take a year to listen to ‘em.