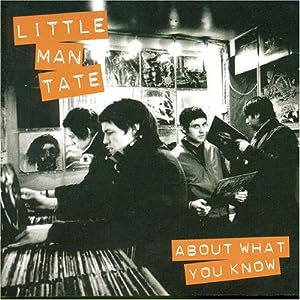 Little Man Tate are a small indie band heralding from the steel producing city of Sheffield, England. A small four-piece, they were only active for four short years before going their separate ways after producing two albums. I will be looking at their first record About What You Know.

Every track throughout the album has, at some point been an earworm of mine, with almost every one having an insanely catchy hook. Each song has a very clear story to tell, which a cast of characters which, for me, is one of the main allures of this album in particular.

The opening track “Man I Hate Your Band” seems to echo similar sentiments found in Morrissey‘s “We Hate It When Our Friends Become Successful“, with the protagonist seemingly enraged at a rival’s band appearing to gain some modicum of success, and then a gleeful refrain of “I’ve seen your band/I hate your band” after their inevitable failure.

Which is not to suggest that the band is without their love songs, however these seem to be less in the vein of romance, and appear to be aimed more at the male demographic. “European Lover” talks of the narrator’s breakup, and the lost lover’s travels. The narrator’s regret at the end of the relationship is sadly too late as she returns with a new partner. This is written in a typically staid fashion, but somehow the sadness shows through despite the fast pace.

Throughout the entire album, the feeling of being young in modern Britain shines through. It is dingy, it is rough. We have plenty of people who enjoy a drink, and we are (despite what they may think over the pond) sexually liberated. The album frequently mentions these in a normalising non-judgemental sense, “Men, she’s had a few / Well I said I knew / But practice makes perfect”.

My controversial choice of favorite track is “House Party At Boothy’s“. Surprisingly to me, everyone I have asked has found this song slightly annoying. I, on the other hand, find the description of a house party with all of its different tangents and different people very familiar. The video accompanying it is also inspired, so feel free to check that out on YouTube.

When I played this album for a friend, her reaction was “All this tells me is that British guys like to drink and fuck.” Well yes. It does have a lot of glorifying of the pub and club culture that is so rife in these parts, but it also shows a different side of that culture, where men can hold a silent torch (“Sexy in Latin“) and women who sleep around aren’t just “easy” (“This Girl Isn’t My Girlfriend”); where just because a guy enjoys ladies’ underwear, doesn’t mean he’s an easy target (“Court Report”).

All of this accompaned by awesome band back up and catchy lyrics, in a style that is reminicent of 90’s band such as Blur or Pulp make me very sad that Little Man Tate are no longer playing live.